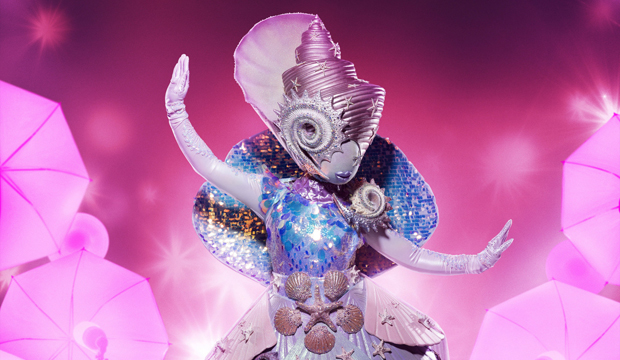 The five remaining contestants in Group A took to the stage again on episode 3 of season 5  of “The Masked Singer,” which aired Wednesday (March 24) on FOX. They first performed on the premiere episode two weeks ago. That marked the first (and last) appearance of the sixth contender from this group: the Snail lost the studio audience vote and was revealed to be The Muppets star Kermit the Frog.

Kermie’s one-time competitors are disguised as the Porcupine, Raccoon, Russian Dolls and Seashell. We rewatched all of their performances from two weeks ago as well as their clues videos. We are convinced we are on the right track when it comes to revealing the real names of the rest of Group A. Keep reading for “The Masked Singer” spoilers, including the true identity of the Seashell, who sang “Listen to Your Heart” by Roxette on March 10.

We are certain that the Seashell is Tamera Mowry, who came to fame with her twin Tia Mowry in the 1990s on the TV sitcom “Sister Sister.” More recently, Mowry was a host on “The Real” talk show alongside Adrienne Bailon Houghton, who was the Flamingo on season 2 of “The Masked Singer.”

SEE ‘The Masked Singer’ Season 5: Everything To Know

The Mowry girls were born in West Germany when their father was stationed there while serving in the US army; we saw a shot of that classic Teutonic treat bratwurst in the clues video. As military brats, they travelled the world; the Seashell says that while growing up she “was pulled by the tide all across the globe.”

The Seashell readily admits to only finding “peace by the shore,” which we take to be a reference to the Mowry clan settling in sunny Southern California so that the girls could pursue their showbiz dreams.

The Seashell confesses that she’s nervous because she hasn’t sang in a really long time. Before finding fame on TV, the twins were in the R&B girl group “Voices.”

Tamera has talked about appearing on “The Masked Singer” ever since her pal Adrienne made such a splash. And she is open about her dream of recording an album of gospel music.

Seeing the Seashell make merry with a broom put us in mind of the Disney Channel movie franchise “Twitches,” in which the sisters Mowry played witches.

That shot of a chameleon make us recall Tamera’s 1995 appearance as a character called after this colorful creature on “Are You Afraid of the Dark?” And the bell puts us in mind of Mowry’s roles in a slew of Hallmark Channel Christmas movies.

SEE ‘The Masked Singer’ spoilers: Who is Raccoon?

The Cluedle-doo told us that “no two shells are the same”; Tamera and Tia have certainly carved out separate paths since becoming adults. Just like the Seashell, Tamera “wears many hats,” as a talk show host, actress, producer and inspirational speaker.

We will only find out if we were right that the Seashell is Tamera Mowry when she is unmasked. That will happen if she loses a popular vote or wins the show. Do you think we are correct in our guess about the real name of the Seashell? Let us know your thoughts in the comments section with your best guesses.