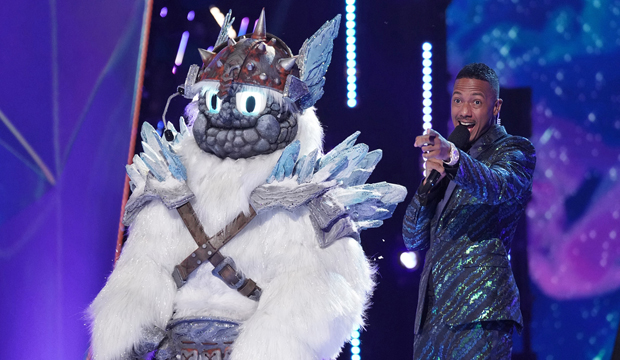 The Yeti may only have made two appearances to date on “The Masked Singer” but he is a strong contender to win season 5. He is the only one of the four Wild Cards still standing and he will sing again on the May 5 episode, “The Spicy 6 – The Competition Heats Up!”

We first saw the Yeti in Week 6 when he wowed with his version of “If It Isn’t Love” by New Edition. The four judges (Ken Jeong, Jenny McCarthy, Nicole Scherzinger and Robin Thicke) opted for him over another Wild Card, Orca, who was revealed to be Mark McGrath. The Yeti returned the following week and earned a slot in the Super 6 with his cover of the hit “Lonely” by Justin Bieber and Benny Blanco.

We’ve gone back and taken another look at those two performances as well as his video clues packages. We are convinced that the judges are way off with their guesses (Todrick Hall, Mario, Sisqo, Justin Timberlake) about the identity of the Yeti. Keep reading for all “The Masked Singer” spoilers, including the real name of the Yeti.

The Yeti is Omarion, the multi-talented rapper, actor and dancer. Don’t believe us? Well consider the following facts and how they fit in with Omarion’s life story.

In the Yeti’s first clue video was a shot of sandwich made with berries; Omarion’s full name is Omari Ishmael Grandberry.

The Yeti referred that week to firewood; Omarion was raised in Inglewood, a suburb of Los Angeles. The Yeti told us that in his neighborhood many yetis turn into monsters but he avoided this because of a secret weapon: a village of warrior women who showed him the way. Omarion credits the positive influence of his mother and his three sisters (represented by the three cupcakes) with keeping him on the straight and narrow.

Omarion was still a teenager when he hit it big as part of the R&B boy band B2K at the start of the millenium. In just five years, they released eight albums, with one of them going platinum and two gold. Since going solo in 2005, Omarion has released six studio albums and two of those were certified gold. As a group, the contestants on “The Masked Singer” have 25 gold and platinum records.

Omarion’s second solo album, “21,” included the hit single “Ice Box”; that certainly describes the structure from which Yeti emerged in his first appearance. Although the Yeti initially appeared to be quite tall, he turned out to be significantly shorter than host Nick Cannon, who is 6 feet; Omarion measures a mere 66 inches (5′ 6″).

One of Omarion’s biggest sellers was “Face Off,” a 2007 collaboration with Bow Wow. That rapper competed on season 3 of “The Masked Singer” as the Frog and made it to third place.

We will only find out if we are right that the Yeti is Omarion when he is unmasked. That will happen if he loses a popular vote or wins the show. Do you think we are correct in our guess about the real name of the Yeti? Let us know your thoughts in the comments section with your best guesses.