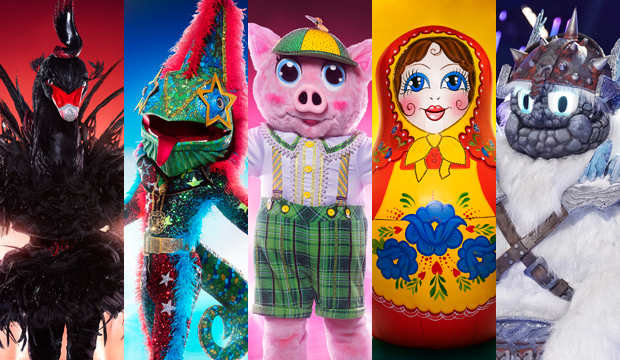 And then there were five. After eight weeks of competition, only a handful of contestants still remain in the running to win “The Masked Singer” Season 5: Black Swan, Chameleon, Piglet, Russian Dolls and Yeti. These costumes last took the stage during Wednesday’s Spicy 6 episode, when their dear friend Robopine was unmasked as actor/singer Tyrese Gibson. Of the remaining Top 5 colorful creatures, which one is YOUR favorite? Vote in our poll below and then defend your choice in the comments section.

As the last woman standing, Black Swan has an advantage over all of her competitors. Perhaps that’s why she’s the front-runner to win the Golden Mask, according to the latest Gold Derby odds. This long-necked bird first appeared as a member of Group B, rocking the house with her rendition of “Barracuda.” “It’s nice to have a badass on this season,” declared Robin Thicke after watching her dominate the stage. Black Swan’s other performances have included “In My Blood,” “How Will I Know” and “Use Somebody.”

Oinking strong in third place on our winner’s chart is Piglet, who the judges are convinced is a 1990s boy band member. “Wow, I did not expect that,” Ken Jeong proclaimed after watching the Group B youngster effortlessly frolic around the stage following his debut performance of “Speechless.” He added, “If Season 5 is a game changer, quite frankly, game over. You are amazing. Great job.” Piglet later wowed viewers with his covers of “Good to Be Alive (Hallelujah),” “7 Years” and “The Pretender.”

Yeti is in the fourth place position to grab the crown, though he’s had much less screen time as he only appeared at the halfway mark as a “wild card.” “He makes the Abominable Snowman look like Frosty the Snowman,” joked host Nick Cannon when the frozen creature first stepped foot on stage and belted out “If It Isn’t Love.” Yeti enjoys switching things up from week to week, like when he donned roller skates for his intimate performance of “Lonely.”

Fighting from the back of the pack is Chameleon, another costume who started out in Group B. As he explained in his clues video, his career “almost tanked” years ago, but now the blue-eyed lizard is hoping to use this new platform to come out a better person. Chameleon’s song book on the show so far has included famous raps from years past — “Ride wit Me,” “21 Questions,” “Hip Hop” and “Regulate” — suggesting he may be a professional in the field.

‘The Masked Singer’ Top 5: Vote for your favorite