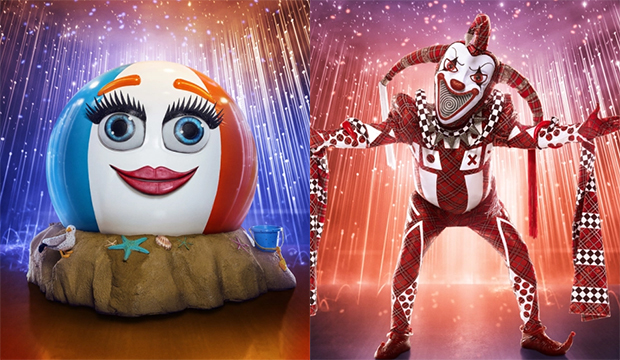 At the start of this sixth season of “The Masked Singer,” Fox announced there would be a total of 16 costumes taking the stage throughout the fall. As of this week’s fifth episode, viewers have already been introduced to 14 of them, which means there are still two wildcards left to meet this season. Beach Ball and Jester, where you been hidin’? See high-res photos of these late additions down below.

The wildcard concept was first introduced in Season 5 as a way to freshen up the reality TV show and keep things entertaining. Instead of having three groups that season, producers decided to have just two groups, and to add new costumes after people were eliminated. There were four wildcards that year: Bulldog (Nick Cannon), Orca (Mark McGrath), Crab (Bobby Brown) and Yeti (Omarion). Yeti made it the farthest in the competition, coming in fourth place.

In Season 6, the number of wildcards increased to six. Group A’s Baby and Hamster both debuted in the second episode, replacing double-eliminees Octopus (Dwight Howard) and Mother Nature (Vivica A. Fox). Pepper joined the show in the fourth episode, taking over for Pufferfish (Toni Braxton) in Group A. And Caterpillar crawled onto the stage in the fifth episode, after a spot was opened by Dalmatian (Tyga) in Group B.

The most recent two eliminations were Baby (Larry the Cable Guy) of Group A and Cupcake (Ruth Pointer) of Group B, so they will be replaced by Beach Ball and Jester over the next couple of weeks. We’re still waiting on official confirmation for which wildcard will join which group.

Do you have any first impressions about who might be hiding inside the smiling, round Beach Ball get-up or the frightening, thin Jester costumes? Give us your early-bird guesses down below.