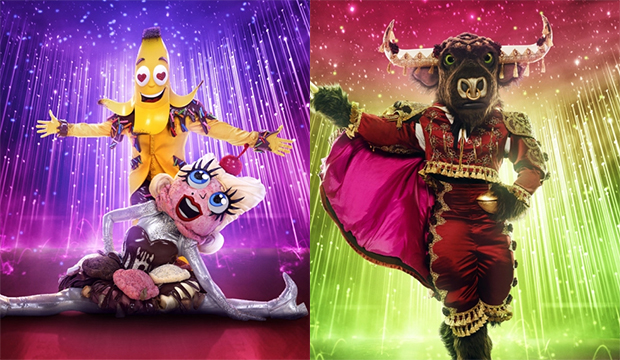 After five weeks of competition, two front-runners have emerged as the likeliest to win Fox’s “The Masked Singer” Season 6: Banana Split and Bull. According to Gold Derby winner predictions, these costumes have what it takes to go the distance and claim the Golden Mask in the December season finale. Banana Split has leading 3/1 odds to win, while Bull comes in second place at 37/10 odds. (The Top 5 is rounded out by Queen of Hearts, Skunk and Pepper.)

Banana Split, not to be confused with Season 3’s Banana (Bret Michaels), entered Season 6 as the only group costume. Interestingly enough, Cupcake was supposed to be a sister duo this year, but Anita Pointer had health issues, so Ruth Pointer performed solo. The only other duo to compete throughout “TMS” history was Season 4’s Snow Owls (Clint Black and Lisa Hartman Black), while Season 5’s Russian Dolls (Hanson) was the only trio.

So far, Banana Split has performed twice on “The Masked Singer” stage: “A Million Dreams” by P!nk in round one and “Cry Me a River” by Michael Buble in round two. The judges praised the ice cream costume’s sultry voice and the fruit costume’s expert piano playing. As for who might be hiding underneath the Banana Split get-up, some of their guesses have included Katharine McPhee & David Foster, Faith Hill & Tim McGraw, Emma Stone & Ryan Gosling, Craig Robinson & Ashley Tisdale, Camila Cabello & Shawn Mendes and Sara Bareilles & Josh Groban.

Bull has been a fan-fave since the season premiere when he belted out “Drops of Jupiter” by Train. He later performed “What Hurts the Most” by Rascal Flatts in round two and “Circus” by Britney Spears in round three. Panelist Nicole Scherzinger claimed to know who was hiding underneath the mask right away, but refused to say because she didn’t want the others to copy her guess.

Speaking of guesses, the judges have been all over the map this season with Bull, throwing out all kinds of A-list names: Brian Littrell, Sisqo, Dwayne “The Rock” Johnson, Darren Criss, Justin Timberlake, Brandon Flowers, Rufus Wainwright, Kevin Jonas, Zac Efron, etc. Are any of these guesses correct? If our readers are right that Bull could win the entire show, we won’t find out who’s masquerading as the mammal for quite a while.