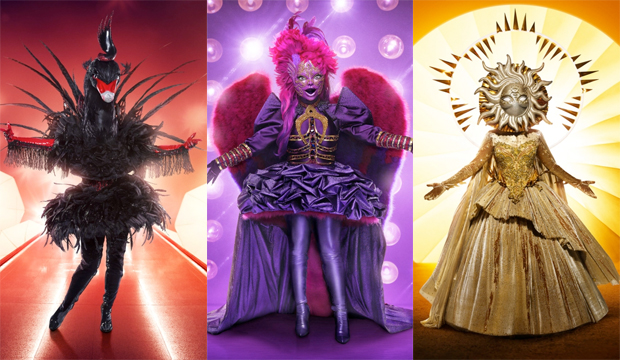 Ever since Black Swan first spread her wings at the start of the Group B performances of “The Masked Singer” Season 5, she’s been a fan-favorite to win the Golden Mask. “I am so excited about this because it’s nice to have a badass on this season,” remarked panelist Robin Thicke after her ear-pleasing rendition of “Barracuda.” Cut to today, where Black Swan has just made it into the coveted Top 4. If the black-feathered, red-beaked bird ends up winning the show, she’d be the third female “Masked Singer” winner in a row after Night Angel (Kandi Burruss) and Sun (LeAnn Rimes). Talk about girl power!

It wasn’t always this way. For the first two seasons of Fox’s reality TV phenomenon, men dominated the finales as both the winners and the runners-up. Monster (T-Pain) and Peacock (Donny Osmond) finished at the top of Season 1, while Fox (Wayne Brady) and Rottweiler (Chris Daughtry) made it the furthest in Season 2. When Night Angel advanced to the Season 3 finale, a narrative emerged both on the show and within the fandom that it was finally time for a female to win. It worked — Burruss claimed victory that year, then Rimes prevailed the following cycle.

According to Gold Derby predictions, Black Swan has leading 19/2 odds to win the fifth season. Piglet is in second place at 11/1 odds, followed by Yeti in third place at 23/2 odds and Chameleon in fourth place at 13/1 odds. Chime in with your own predictions before the semi-finals air Wednesday, May 19 on Fox.

Over the course of the season, Black Swan has performed all kinds of genres of music, from rock to soul to ballads. In our updated rankings of her performances, we think “In My Blood” by Shawn Mendes was her best moment of the stage so far, followed by “Barracuda” by Heart at #2, “Someone Like You” by Adele at #3, “How Will I Know” by Whitney Houston at #4, “Thinking Out Loud” by Ed Sheeran at #5 and “Do I Do” by Stevie Wonder at #6.

Here is how Black Swan describes herself in her own words: “Black swans like me are incredibly rare. But I didn’t factor in that my talent might make me someone else’s prey. I was caught up, hypnotized by a Hollywood deal I couldn’t resist — one that would make my dreams come true. But there was a steep price. I fell under its spell and I worried I’d never see the light again, when all of a sudden my faithful flock flew to my rescue and set me free. So I’m here to show the world that I’m in control and I’m ready to own that stage.”