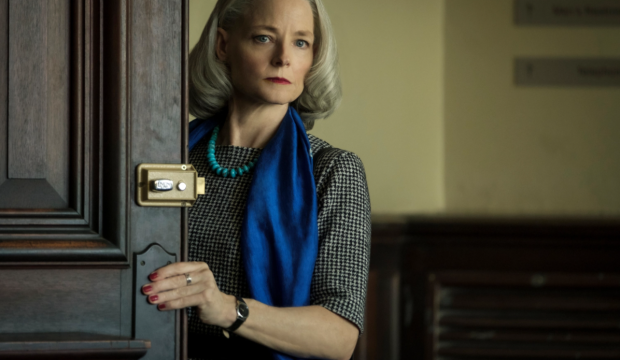 When Jodie Foster accepted her second Academy Award in 1992 for her portrayal of Clarice Starling in “The Silence of the Lambs,” she expressed gratitude for the embracement of “such an incredibly strong and beautiful feminist hero.” In the almost three decades since, she has continued to play all sorts of gutsy women in films like “Contact,” “Panic Room,” and “The Brave One.” But she has been nominated for only one of these roles – “Nell” in 1995. She lost that race to Jessica Lange (“Blue Sky”).

This year she should finally be back on the academy’s radar for her scene-stealing turn in “The Mauritanian” from STX. Kevin Macdonald’s gripping docudrama tells the story of Mohamedou Ould Salahi, who was erroneously detained at Guantanamo Bay detention camp for 14 years on suspicion of involvement in the 9/11 terrorist attacks. Foster portrays Nancy Hollander, a New Mexico defense attorney who bravely decides to take on Salahi’s case pro bono.

The actress has chosen projects that reflect the closing line of her speech when she won her first Oscar in 1989 for “The Accused”: “Cruelty might be very human and it might be very cultural, but it’s not acceptable.” As the virtuous and magnanimous Hollander, she demonstrates that belief perhaps more clearly than ever.

Viewers and critics have noted hints of Clarice Starling in her performance, with Peter Debruge (Variety) pointing out that Hollander “dares to confront this presumed monster” because of an urge to uncover the truth and ensure justice. That rigid yet compassionate nature made Foster the ideal casting choice. She “bites into her with abandon” (Pete Hammond, Deadline). Indeed, she evokes the Oscar-nominated work of Susan Sarandon in “The Client” and Emma Thompson in “In the Name of the Father” in her embodiment of Hollander’s selfless fight for Salahi’s life.

Foster’s powerful turn has already landed her a career eighth Golden Globe nomination. If it translates to a Best Supporting Actress Oscar bid, it will be the 58-year-old’s fifth overall. Her first came at age 14 for her featured role in “Taxi Driver.” She then scored her first Best Actress win for “The Accused” 12 years later, making her the third of four child nominees to also be recognized in adulthood. At 29, she became the second youngest double Best Actress winner (after Luise Rainer), and then vied for the award one more time for “Nell.”