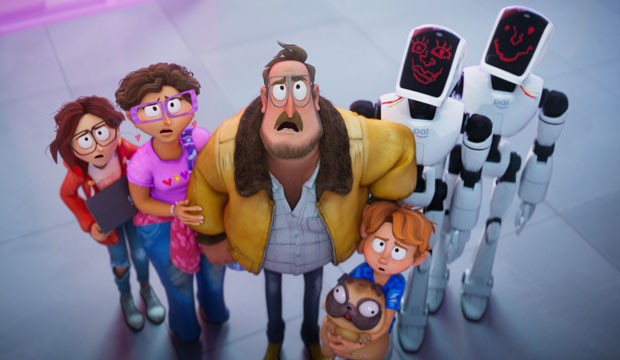 With the 2021 Oscar race just concluded, the race for awards in 2022 has already begun. On April 30 Sony Pictures released an animated film through Netflix, “The Mitchells vs. the Machines,” and from the looks of the reviews, it might already be a contender for Best Animated Feature.

As of this writing the film has a MetaCritic score of 80 based on 23 reviews counted thus far: 21 of them positive, two of them somewhat mixed, and none outright negative. Over on Rotten Tomatoes the film is rated a whopping 97% fresh based on 89 reviews, only three of which are classified as rotten. The RT critics consensus sums up the reviews by saying, “Eye-catching and energetic, ‘The Mitchells vs. the Machines’ delivers a funny, feel-good story that the whole family can enjoy.”

SEEAfter Oscar coronation, is an Emmy bid for ‘The Crown’ next for Emerald Fennell?

The film tells the story of the title family driving daughter Katie (voiced by “Broad City” star Abbi Jacobson) to film school only to find themselves having to stop a robot apocalypse — don’t you hate it when that happens? Reviews are describing it as “colorful and crazy,” “antic” and “irreverent” with “pristine digital animation.” It’s “an incredibly fun and engaging animated film.”

It’s written and directed by Michael Rianda and Jeff Rowe, both alums of the Emmy-winning Disney animated series “Gravity Falls.” It’s also produced by Phil Lord and Christopher Miller, the masterminds behind “The Lego Movie” as well as Oscar winners for “Spider-Man: Into the Spider-Verse,” which was Sony’s first film to claim Best Animated Feature. Can they already count on a repeat nomination for “The Mitchells”? Check out some of the reviews below, and join the discussion on this and more with your fellow movie fans here in our forums.

SEEOscars hindsight is 20/20: Why we should have called that Frances McDormand upset for Best Actress

Linda Barnard (Original Cin): “Colourful and crazy paced road trip animation, ‘The Mitchells vs. The Machines’ is the goofy-smart and entertaining family fare we’ve been needing in these fun-challenged times. Created by Phil Lord and Christopher Miller (‘Spider-Man: Into the Spider-Verse,’ ‘The Lego Movie’) it’s laced with the duo’s signature rapid-fire pacing.”

Maya Phillips (New York Times): “The film combines pristine digital animation with live-action images and 2D drawings — interjections from Katie, who serves as both our narrator and director, imaginatively revising and annotating the story as she tells it. That, along with the seemingly endless number of movie references and hidden gags, makes a film with not just laughs (though, believe me, there are plenty of those) but a clear, well-formed identity.”

Molly Freeman (ScreenRant): “Beyond the story and the characters, the strongest aspect of ‘The Mitchells vs. the Machines’ is its animation style. Like ‘Spider-Man: Into the Spider-Verse’ before it, ‘The Mitchells vs. the Machines’ is unafraid to add its own original visual flair … setting it apart from all other animated movies, while also helping to establish character. This results in an incredibly fun and engaging animated film.”

Jake Coyle (Associated Press): “Easily the most heartfelt movie about family life that also includes a robot apocalypse and a pug often mistaken for a loaf of bread, ‘The Mitchells vs. the Machines’ is an antic, irreverent animated delight that somehow doesn’t sacrifice depth even as it hurtles forward at breakneck comic speed.”