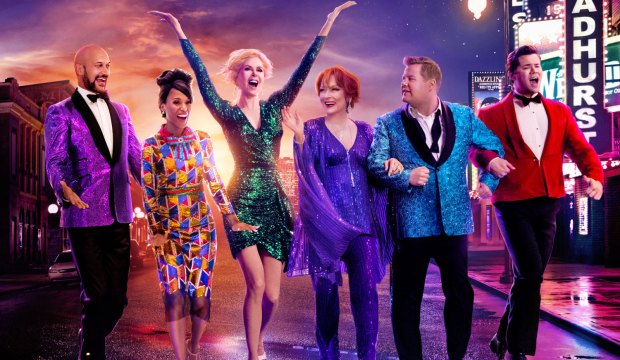 “The Prom” may be welcome counter-programming for Oscar voters. It’s a sunny, optimistic musical comedy at the end of a dark year many people wish they could forget. And it’s one of the few upbeat contenders in an awards season filled mostly with dramas.

Consider the upper echelons of our official racetrack odds for Best Picture, which are calculated by combining the predictions of thousands of Gold Derby users. Leading the way are “Nomadland,” about a struggling working-class woman living out of her van; “Mank,” about the political and professional conflicts of the famed screenwriter of “Citizen Kane”; “The Trial of the Chicago 7,” about anti-war activists railroaded by a corrupt justice department; “One Night in Miami,” in which famous figures clash over their roles in the Civil Rights Movement; and “Ma Rainey’s Black Bottom,” in which Black musicians deal with racism and trauma in the 1920s.

Those films are often rousing, but their subject matter is fairly serious. And there are more dramas on down the list of major contenders: “The Father,” “Minari,” “News of the World,” “Da 5 Bloods” and so on. The Pixar animated film “Soul” is the only comedy among our current top 10 predicted nominees, but Pixar comedies often wring even more tears from audiences than dramas do. It’s true that the Oscars are typically skewed towards dramas, but some music or comedy usually finds its way in, like recent Best Picture nominees “The Grand Budapest Hotel” (2014), “La La Land” (2016), “Lady Bird” (2017), “The Favourite” (2018), “A Star is Born” (2018) and “Jojo Rabbit” (2019).

And a lack of universal support from critics isn’t always a deal-breaker. “Jojo Rabbit” had mixed reviews, as did a couple of recent musical Best Picture contenders, “Les Miserables” (2012) and “Bohemian Rhapsody” (2018). “The Prom” could stand out to voters even more, contrasting as starkly as it does against the rest of this year’s dramatic field. Having Oscar winners Meryl Streep and Nicole Kidman singing and dancing in your cast doesn’t hurt.