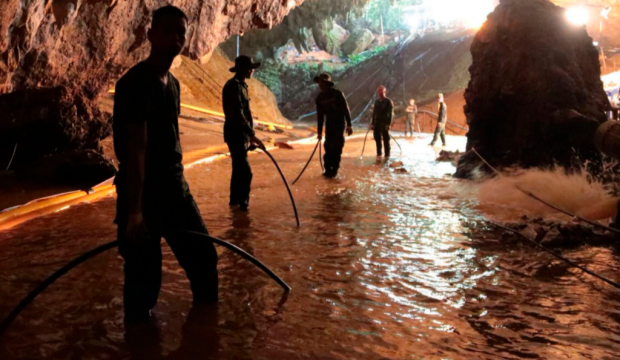 Documentary filmmakers often come across people with great footage, but the story is lacking. That wasn’t the case for married filmmakers Elizabeth Chai Vasarhelyi and Jimmy Chin, who won the Academy Award for Best Documentary Feature and the Emmy for directing the exhilarating 2018 “Free Solo.” That film chronicled Alex Honnold’s attempt to free climb Yosemite’s famed rock, El Capitan. For their latest NatGeo documentary, “The Rescue,” they had a great story and barely any footage.

“The Rescue” revolves around the complicated, multi-nation underwater rescue mission in 2018 to save the lives of 12 young Thai soccer players and their coach trapped two kilometers in the flooded Tham Luang cave in the country’s Chiang Rai Province. It recently opened to glowing reviews after winning the People’s Choice Award at the Toronto Film Festival. The L.A. Times’ Justin Chang noted that the “The Rescue” is a “gripping, unsurprising moving early account, one that emphasizes the pluck and ingenuity of its heroes and the resilience and beauty of its survivors.”

“The cave is pitch black,” explained Vasarhelyi during a recent Deadline Zoom conversation. “The water is muddy. No civilians were allowed to film-no civilians were allowed in the cave except for the divers.” Added Chin: “The only people who had footage inside the cave is a military covert special forces team.” In fact, “The Rescue” was nearly completed when thanks to the Covid-19 vaccination, Vasarhelyi was able travel to Thailand and acquire 87 hours of footage shot by the Thai Navy Seal during the 18-day rescue.

Then there was a rights grab. National Geographic had acquired the documentary rights to the divers, but wasn’t able to get that of the boys’. Still, Vasarhelyi but got to talk with them when she visited Thailand. Because of the pandemic, they had to virtually meet and interview British cave divers who first found the boys: the unassuming Richard Stanton and John Volanthen. “So, there was every possible constraint you can imagine,” she explained.  “It was very clear from the beginning that we would have to use reenactments if we were going to allow audiences a way in and to really feel what transpired and understand the stakes of the rescue.”

“There was certainly the challenge of acquiring the footage,” said Chin, “but also I think it was really important to us as filmmakers that authenticity and accuracy are obviously very important to us. And really the exercise of bringing the divers together”-reenactments were shot in a tank at Pinewood Studios in England-“to show us how they did it, that served multiple purposes. Obviously, it’s great footage so people could see what they did. But it was really educational for us to see it as well because of how technical it was.”

Just as the rest of the world, Vasarhelyi and Chin were transfixed with the story in 2018, “living through the ups and downs and ups,” she said. “I think it’s a great story. Also, we’re parents of Asian kids. So, it’s hard not to look at it really personally in some way.” During the production, Vasarhelyi said, “we learned a lot about the challenges in people coming together and how at the end of the day, it was essential that all these different people came together. Just the sheer logistics of it all were formidable. In addition, I think there was this idea of absolute morality. People who are making choices, irregardless of the personal stakes at hand. They had everything on the line. They really thought only one child could be saved and yet they still decided to attempt the rescue. “

And the same thing goes, she said, for the Thai Navy Seals and the Australian Dr. Richard Harris, a cave diver anesthetist who came up with the idea to sedate the boys with a cocktail of Xanax, Ketamine and Atropine so they would not become hysterical during the two-and-half-hour trip out of the cave. When Vasarhelyi met the young survivors in Thailand, they knew the directors had acquired the footage Dr. Harris shot with his GoPro to film of them being anesthetized. “They asked me if they could watch it,” she recalled. “That was tricky because it could re-traumatize someone, but you have to respect their wishes. So that was hard, but it was also fulfilling to be able to do something [for them].

The filmmakers also utilize graphics to explain just how “labyrinthian” the cave is. “Hopefully through the graphics, [audiences will see] they are not just stuck in the back of a cave,” said Chin. “They are two kilometers in a submerged cave.” “Until I saw the cave with my own eyes-until I walked the cave, I didn’t understand the scale,’” said Vasarhelyi.  “I didn’t understand how they needed so many people to affect the rescue…. just how ludicrous it was. We were hoping with the graphics to really try to show people how there really is no egress.”