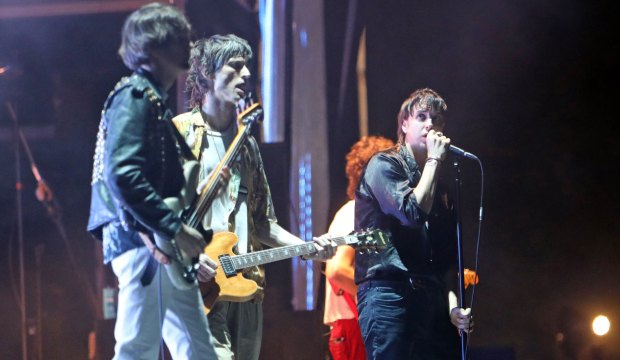 The rock band The Strokes have been around for almost two decades now, breaking through in 2001 with their debut studio album “Is This It.” Now the band is up for Best Rock Album for “The New Abnormal” … but would you believe it’s the first time they’ve ever been nominated? Perhaps they’ll finally take home a gramophone as a way for voters to make up for lost time.

“Is This It” was a platinum-selling hit, but its acclaim was far greater. Rolling Stone placed it on their list of the best albums of all time. Other publications like Spin, The Observer, Mojo and Entertainment Weekly listed it among the best, most influential albums of the generation. And in 2019 The Guardian called it the second best album of the 21st century. Yet it was completely blanked at the Grammys — that year’s rock winners included U2, Linkin Park and Train.

It wasn’t the Grammys’ first blind spot, and it wouldn’t be their last (just ask The Weeknd). But it’s surprising that voters didn’t nominate any of the band’s next four albums either: “Room on Fire” (2003), “First Impressions of Earth” (2005), “Angles” (2011) and “Comedown Machine” (2013). Nothing in album categories or in performance or songwriting races either — though lead singer Julian Casablancas did win Album of the Year as a featured artist and producer on Daft Punk‘s “Random Access Memories” (2014). So it was kind of unexpected to finally see them on the recording academy’s list now for their first album in seven years.

Now that they’re in, can they win? This is their only nomination, but they get leading odds of 82/25 based on the combined predictions of Gold Derby’s users. Their toughest competition might be Sturgill Simpson, who is nominated for “Sound and Fury” and ranks second in our forecasts with 19/5 odds; it’s his first bid in the rock field, but he previously won Best Country Album for “A Sailor’s Guide to Earth” (2017), which was also up for Album of the Year. He’s the only nominee in this category with a previous Grammy victory.

Simpson doesn’t have any other nominations this year either. Neither do fellow nominees Michael Kiwanuka (“Kiwanuka”) or Fontaines D.C. (“A Hero’s Death”). The only Rock Album contender with any other bids at all is Grace Potter (“Daylight”), who has an additional Best Rock Performance nom for her album’s title track. That makes it hard to tell who exactly might have the most support from the recording academy. So there might be no time like the present for voters to make it up to the long-overdue Strokes.