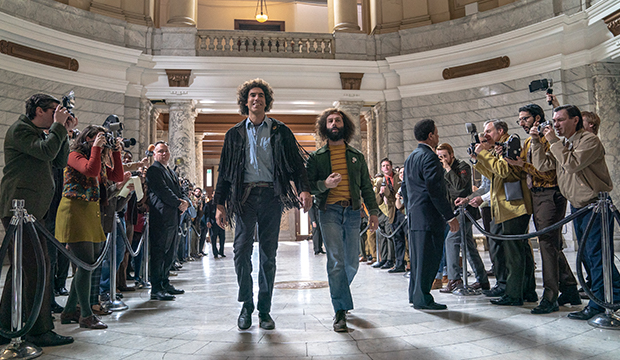 The Screen Actors Guild Awards spread the wealth across their six film acting categories. “The Trial of the Chicago 7” won the top race for the best ensemble cast of the year, but that was the only award it won. It was “Ma Rainey’s Black Bottom” that collected the most total trophies with two. Check out the complete list of TV and film winners here.

It’s not too surprising that “Trial” won the top prize. It’s the epitome of an ensemble movie with numerous actors sharing spaces together and bouncing off of each other’s performances. And it was the only Oscar nominee for Best Picture in the category besides “Minari,” which you almost always need to win the top SAG Award — no film since “The Birdcage” (1996) has won for its cast without a corresponding Oscar bid.

But it is a little surprising that the guild picked the only cast without any women among its cited performers. The SAG prize was awarded to 10 men: Yahya Abdul-Mateen II, Sacha Baron Cohen, Joseph Gordon-Levitt, Michael Keaton, Frank Langella, John Carroll Lynch, Eddie Redmayne, Mark Rylance, Alex Sharp and Jeremy Strong. This is the first time in SAG Awards history that a cast has prevailed without any female actors included in its lineup.

But “Ma Rainey” was the most awarded film with its victories for both of its lead actors. Chadwick Boseman won posthumously for his role as Levee, as predicted, but Viola Davis also prevailed for her portrayal of the title character. It’s Davis’s second win in the best film actress category following “The Help” (2011); between film and television she has now won six total SAG Awards.

Rounding out the film winners were Daniel Kaluuya (“Judas and the Black Messiah”) and Yuh-Jung Youn (“Minari”) for their supporting performances, as well as “Wonder Woman 1984” for its stunt ensemble. Will all of these winners repeat at the Oscars? All four individual acting winners at last year’s SAG event agreed with the Oscars, and ensemble winner “Parasite” also claimed Best Picture, though the ensemble award only agrees with the Oscars about half the time. Will this be one of those times?