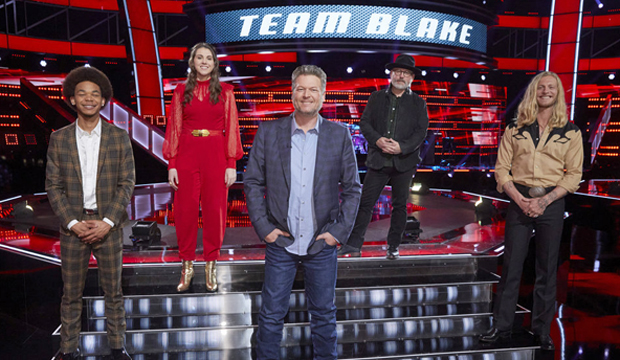 The Knockouts for Season 20 of “The Voice” concluded on Monday, April 26, and seven-time winning coach Blake Shelton will head into the live shows with one of his most diverse teams to date. His eclectic collection of vocalists includes country, pop, rock and R&B singers hoping to become Team Blake’s eighth champion. Below is our power ranking of these five artists based on their likelihood of advancing to the next round.

Hoping to crush Blake’s dreams of winning another title will be his coaching rivals John Legend, Kelly Clarkson and Nick Jonas. Kelly is seeking her fourth championship while John hopes to win his second and Nick his first. But have they assembled the right teams to defeat the cowboy? And do YOU agree with our power rankings below? Sound off in the comments and let us know which artist is your favorite from Team Blake.

This 19-year old soul singer is bursting with star power and lights up any stage he steps on. Cam isn’t the likeliest front-runner from Team Blake, but choosing the country coach proves this teenager is savvy and has a strategy. Blake has shown a fierce loyalty to singers outside of the country music genre who were willing to take a chance on him. This unlikely pair could end up being the most powerful once live shows begin.

2. Pete Mroz
(Blind Audition: “Can’t Find My Way Home”; Battles: “Have a Little Faith in Me”; Knockouts: “Before You Go”)

At 45 years old, Pete is the oldest competitor this season, but his experience and brings stage presence that could work to his advantage. His relationship with Blake goes back decades, when they started off in a group together called The Young Riders. Their careers obviously took different turns, but Pete is a killer vocalist with great instincts. And his relationship with Blake could prove vital if he ever needs a coach’s save.

This 20-year old pop singer has a purity in her voice that lends itself to country crossover potential. It’s no surprise that Blake snatched her up after she lost in the Knockouts on Team Kelly. As we learn more about Anna’s story and her life-threatening illness she faced as a teenager, the more she draws us in. Her vocals have been spot on and although she’s not a powerhouse, her quiet confidence could win over viewers at home.

4. Jordan Matthew Young
(Blind Audition: “I’m No Stranger to the Rain”; Battles: “Calling All Angels”; Knockouts: “She Talks to Angels”)

This gritty rocker also leans towards the country genre, which could benefit him in terms of widespread appeal from voters at home. But the 34-year old just hasn’t made much of an impact throughout the first three rounds of competition. He never falters vocally, but could also be seen as forgettable and safe. He needs a huge “wow” moment if he wants to separate himself from his teammates and advance to the next round.

After losing in the battles to Cam, this 25-year old was saved by Blake to compete in the four-way knockout. The results of that contest have yet to be revealed, so there’s a chance Emma’s run on “The Voice” is already over. Her voice is beautiful and cuts through notes like a razor blade, but she lacks confidence and seems unlikely to move forward.