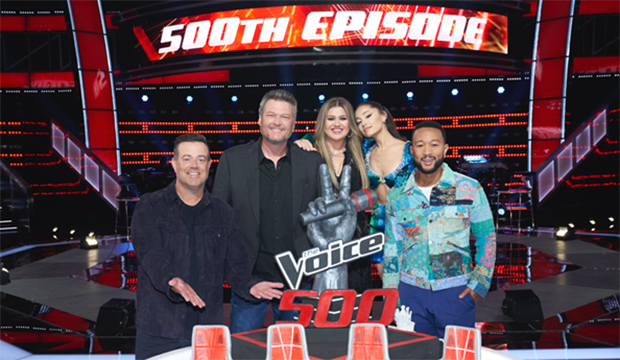 “The Voice” is celebrating its landmark 500th episode on October 26 as the knockouts continue for coaches Blake Shelton, Ariana Grande, John Legend and Kelly Clarkson. The NBC reality TV singing competition first premiered on April 26, 2011 and began its 21st season on September 20, 2021. While the coaching panel has shifted over the years, host Carson Daly has acted as the emcee since day one. In a recent interview with Gold Derby, Daly explained how the show’s success caught everyone by surprise.

“Never!” was the quick response Daly had when asked if he predicted his hosting gig on “The Voice” would last more than 20 seasons. “It was quite the opposite. People thought we were crazy. If you recall the landscape in television at that time, ‘American Idol,’ by all accounts, was kind of rounding third heading for home after their monumental success. Yet there still seemed to be an appetite for singing competitions because ‘X-Factor’ was coming over from Europe. When we got this format from Holland, we had a very small window of time to get it on NBC before ‘X-Factor.’ We never thought we’d last, we barely thought we would survive.”

In another recent interview, executive producer Audrey Morrissey explained how the show has evolved over the years by adding exciting twists such as steals, instant saves and the onboarding of new coaches. “You want to keep things fresh,” Morrissey said. “You want people coming back for more, having an unexpected element. But it’s got to make sense. It has to fit with the core values of the show.”

SEE ‘The Voice’ schedule for Season 21

Throughout the first 500 episodes and 21 seasons, Shelton is the only coach that has held onto his chair for the entire run. Other award-winning superstars that occupied seats prior to the current slate include Christina Aguilera, CeeLo Green, Adam Levine, Shakira, Usher, Pharrell Williams, Gwen Stefani, Miley Cyrus, Alicia Keys, Jennifer Hudson and Nick Jonas. “They are themselves,” said Morrissey when asked about why each coach has been successful. “They’re not playing a character. They’re not being their stage version or the polished, manicured version from social media. It’s them! That’s what’s so great about the show.”

To date, Shelton has towered over his coaching competition by winning eight seasons of “The Voice.” Levine and Clarkson each won three times while Usher, Williams, Aguilera, Keys, Legend and Stefani each have one victory. “The Voice” has earned 69 Emmy nominations and won seven, including four for Best Reality Competition Program. Watch the celebratory 500th episode on Tuesday, October 26 at 8:00 p.m. ET/PT.