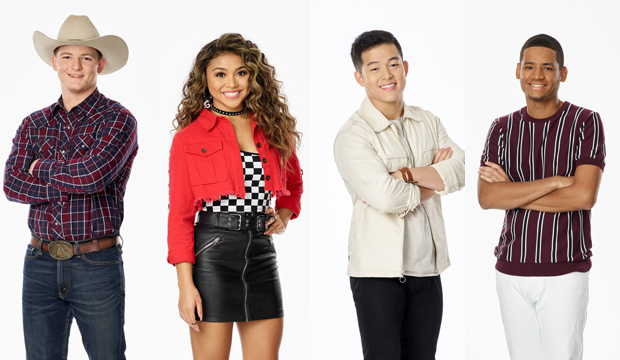 The first knockout round of “The Voice” Season 20 turned out to be the end of the road for four talented singers: Ethan Lively of Team Blake Shelton, Ciana Pelekai of Team John Legend, Keegan Ferrell of Team Nick Jonas and Gean Garcia of Team Legend. Thus, the number of artists still in the running to win the title is now at 24 (down from 28). But which of the four eliminated artists from the April 19 episode was most robbed of a spot in the live shows? Vote in our poll below and then be sure to defend your choice in the comments section.

Ethan, a 17-year-old country artist from Coalfield, Tennessee, auditioned with the song “You Look So Good in Love” and ended up being a one-chair turn for Team Blake. He next performed “Just Got Started Lovin’ You” in the battles and beat out teammate Avery Roberson. He then lost this week’s knockout of “Help Me Hold On” to Jordan Matthew Young, with their coach explaining that Ethan, comparatively, wasn’t quite as “ready” to start a career.

Ciana, a 20-year-old pop singer from Oahu, Hawaii, took on “Dance Monkey” as her blind audition song and earned chair-turns from both John and Nick; she defaulted to Team Legend since Nick was blocked. In the battles she performed “You Broke Me First” and eliminated her sparring partner Denisha Dalton. Ciana’s rendition of “Cuz I Love You” in the knockouts turned out to be the end of the road, as Pia Renee earned John’s vote instead thanks to her powerful vocals.

Keegan, a 21-year-old pop singer from Fort Wayne, Indiana, chose “She Will Be Loved” as his blind audition song and caused Blake and Kelly Clarkson to turn their chairs around. He joined Team Blake. Later, Keegan lost his battle of “Calling All Angels” to Jordan Matthew Young, which is when Nick swooped in to steal him for his team. Keegan wasn’t on Team Nick long as his knockout performance of “Just My Imagination (Running Away with Me)” lost out to Dana Monique.

Gean, a 19-year-old soul singer from McAllen, Texas, chose “All I Want” as his first performance and wowed three coaches: Kelly, Blake and Nick, the latter of whom was blocked by Blake. He joined Team Kelly. Later, Gean and Ryleigh Modig‘s battle of “pov” ended with Ryleigh winning and Gean being stolen by Team Legend. In the knockouts, Gean worked on his enunciation while performing “Afterglow,” but couldn’t muster a win as he was sent home by his new coach.

Which eliminated artist was most robbed on ‘The Voice’?