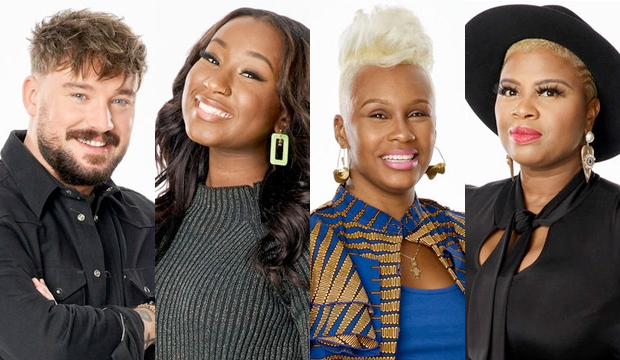 And then there were five. During Tuesday’s semifinals results show on “The Voice,” four more artists went home based on America’s votes, leaving only the Top 5 still in the competition. The four eliminated singers were: Corey Ward and Gihanna Zoe of Team Kelly Clarkson, Pia Renee of Team John Legend and Dana Monique of Team Nick Jonas. (No one from Team Blake Shelton was sent home.) Of these unlucky artists, who do you think was most robbed? Vote in our “The Voice” poll below.

Tuesday night began with all of the Top 9 artists finding out who from each team advanced based on America’s votes. Team Kelly was up first, with Kenzie Wheeler winning the audience vote over Corey and Gihanna. For Team Legend, Victor Solomon was America’s choice over Pia. Onto Team Nick, where Rachel Mac scored the most votes over Dana. Finally, Team Blake fans learned that Cam Anthony was the audience pick over Jordan Matthew Young.

After those dramatic proceedings, host Carson Daly re-introduced the five artists who would vie for the instant save. They each performed a song on live television, with Pia picking “Everything I Wanted,” Corey choosing “Iris,” Dana doing “Caught Up in the Rapture,” Jordan jumping on “Drift Away” and Gihanna going with “Someone You Loved.”

America only had about five minutes to cast their votes for who would complete the Top 5, and they went with … Jordan! That means Team Blake once again has two artists heading into the finale, Cam and Jordan. The other coaches have one apiece.

SEEBlake Shelton: Cam Anthony will be ‘The Voice’s’ biggest ‘superstar’ ever [WATCH]

Of the four artists who went home on Tuesday night, we want to know who was most robbed of a shot of advancing to the next round. Vote for your choice in our “The Voice” eliminated contestants poll and then be sure to explain your decision in the comments section.

Who was most robbed in ‘The Voice’ semifinals?

Created with Poll Creator
SEEexclusive predictions: Who will win ‘The Voice’?