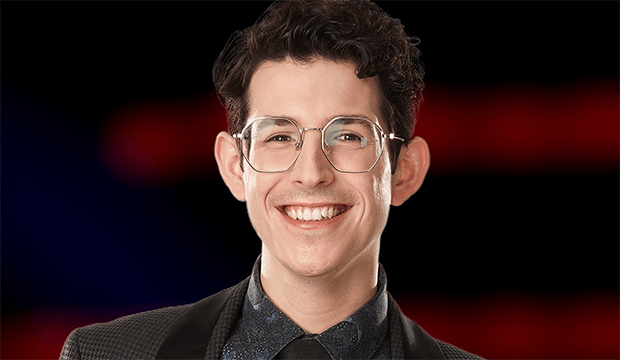 To make way for its Final 5 artists, “The Voice” eliminated three contestants during this week’s results show: Joshua Vacanti of Team John Legend, Lana Scott of Team Blake Shelton and Jim & Sasha Allen of Team Ariana Grande. In our recent poll that asked “The Voice” fans which of these artists they thought was most robbed of a spot in the finals, a whopping 64% voted for Joshua. This 28-year-old New Yorker was an early fan-fave thanks to his mix of power ballads and Broadway show tunes, but he sadly didn’t earn enough support to make it into the grand finale.

Here are the complete poll results for who viewers thought was most robbed this week:

Joshua started out the competition by singing “Into the Unknown” in the blind auditions, earning a pair of chair turns from John and Ariana. However, he only had one option of which team to join since John had used his block on Ariana. In the next two rounds he sang “good 4 u” in the battles (eliminating Keilah Grace) and “Falling” in the knockouts (sending home Sabrina Dias).

The live shows were where Joshua truly came alive as an artist, earning enough support from America to advance thanks to his covers of “You and I” (Top 21), “You Will Be Found” (Top 13), “The Show Must Go On” (Top 11) and “If I Ain’t Got You” (Top 10). The first and only time he appeared in the bottom was during the semi-finals, when his cover of “Ashes” failed to earn him a spot in the Top 4. He performed “My Heart Will Go On” as his instant save song, losing out to fellow Team Legend artist Jershika Maple.

Below, see a sampling of furious responses from fans who were quick to speak up after Joshua was eliminated during the December 7 episode of “The Voice”:

Judi: “I don’t even like the kind of music Joshua sings but his voice is so insanely beautiful. He is a standout.”

Michael Lunburg: “Joshua Vacanti should still be there.”

Veronica: “Joshua was surely robbed. I absolutely love his voice.”

Melissa: “Joshua Vacanti should have never been eliminated. His vocal abilities and range far surpassed many that are still on the stage. This is such a travesty; I might not watch going forward.”

Jennifer: “Joshua Vacanti should be there representing Team Legend. He was never in the bottom 3 till last night and still shouldn’t have been. He’s going to make BIG on Broadway!”

Diana Fisher: “Joshua should still be there. Not too many people can pull off Celine. He is incredibly talented. The dude can sing.”