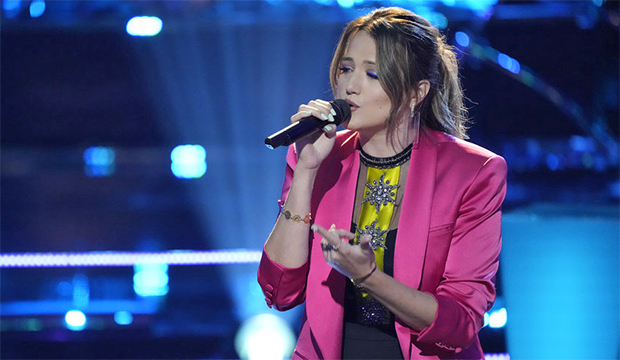 During the second week of “The Voice” Season 21 battles, a whopping 10 artists were sent home after losing their head-to-head match-ups. Of this large group of ousted contestants, fans still can’t believe Kelly Clarkson eliminated Parker McKay so soon. The 30-year-old singer from Pittsburgh, Pennsylvania received leading 37% support in our recent poll that asked readers to pinpoint which elimination shocked them the most. Parker exits the reality TV show just one week before the start of the knockouts.

Here’s how all 10 eliminated artists fared in our poll results:

As you may recall, Parker was the very last person to audition for this season, and Kelly was the only coach still with a slot left on her team. Parker’s blind audition song was “Slow Hands” by Niall Horan. Her sultry cover wowed Kelly enough to push her “I Want You” button. “I was your only option,” Kelly joked after turning her chair around. “Welcome to the obvious team for you.”

In the battles, Kelly paired up Parker with The Cunningham Sisters, a harmonic duo from Hamilton, Ohio. The singers all delivered a slowed-down, Lana Del Rey-esque performance of Lesley Gore‘s “It’s My Party” to glowing reviews from the judges. Kelly didn’t overtly explain why she chose the teenage sisters as the winners of the battle, except to say she couldn’t fight the “what is gonna happen” aspect in her heart.

When Parker left the stage, Kelly gave her a standing ovation, declaring, “You did awesome.” Kelly had already used her steal on Kinsey Rose, so she couldn’t keep Parker in the competition even if she wanted to. As for the other coaches, only Blake Shelton had his steal left, but he opted to save it for later, using it on Jonathan Mouton.

Do you agree that Parker’s elimination was the most shocking from Battles Week 2? Sound off down in the comments section. We also ran a poll for Battles Week 1 and Vaughn Mugol of Team Ariana was the artist fans were most crushed to see go home.