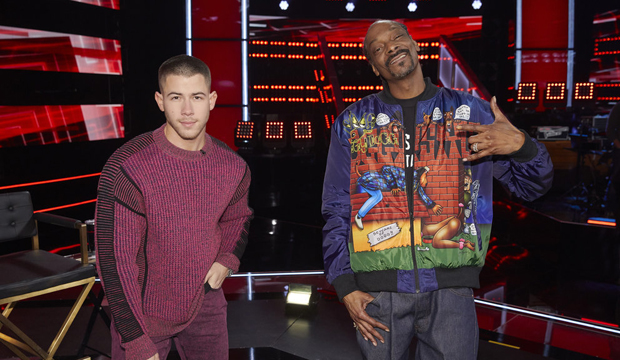 One of the most famous mega mentors in “The Voice” history, Snoop Dogg, returned as the knockouts resumed on Monday night. He’s here to give expert advice to the four coaches — Nick Jonas, Blake Shelton, John Legend and Kelly Clarkson — when it comes to mentoring their young artists. In this round each judge had one last chance to steal someone from another team, with both John and Nick using theirs last week for Ryleigh Modig and Andrew Marshall, respectively. So how did the final night of knockouts play out?

Below, read our minute-by-minute “The Voice” recap of Season 20, Episode 11 to find out what happened Monday, April 26 at 8:00 p.m. ET/PT. Then be sure to sound off in the comments section about your favorite artists on NBC’s long-running reality TV show, which coach you’re rooting for and who you think will ultimately join “The Voice” winners list for this 10th anniversary season. Here is a closer look at each coach’s team:

8:00 p.m. – “Previously on ‘The Voice’!” In last week’s 10th episode, four artists said goodbye during the knockout round: Ethan Lively of Team Blake, Ciana Pelekai of Team Legend, Keegan Ferrell of Team Nick and Gean Garcia of Team Legend. Following those eliminations, there were exactly 24 artists still in the competition. But enough about last week — it’s time to get to the second night of knockouts. Let’s go!

8:01 p.m. – For the first knockout of the night, Nick brought together Rachel Mac and Zae Romeo, two of his youngest artists. Rachel selected Jewel‘s “Foolish Games” to which Snoop said she has a lot of soul, but he worked with her and Nick to create an ending to the song that has a “better bang.” Zae chose “Electric Love” by Børns, flipping it away from the original version and into something that Nick thought might create a “viral-ish moment.” In her performance, Rachel drew out the slow build of the song, but then emerged into that final stretch of the song that Snoop encouraged at the end for a huge vocal moment. Zae countered with a performance that was strong from the very beginning, providing himself a lot of notes that had Kelly screaming and standing up from her chair. Both Kelly and John told the two of them that they were “moved” by their performances — John liked that Zae was showing more of who he is as an artist and Kelly said he loses himself in the song in the best way. Blake sided with Rachel this time, interested in the fact that she was a one-chair turn and has already shown tremendous growth. Ultimately, it boiled down to wanting to stick with the dark horse option and that’s Rachel. Quickly though, Kelly hit her button for Zae, keeping him in the competition and bringing him over to her team.

8:16 p.m. – In Kelly’s first pairing of the night we got her two country guys Avery Roberson and Kenzie Wheeler. Avery chose “Tomorrow” by Chris Young to stress his brand as a storytelling singer. Kelly pointed out his few pitchy parts that were a result of his lack of air, to which Snoop advised him to create levels in his voice. Kenzie picked “Beer Never Broke My Heart” by Luke Combs because he felt that it’s a type of song he hasn’t done on the show yet, offering him a chance to jam. Both Kelly and Snoop were excited by his song choice and how much energy he brought to the vocal. Kelly told him that his hardest job on this song will be creating the sense of an audience for himself so that he can bring the excitement to his performance that would come more easily with a live crowd. Kenzie did get the virtual audience for his performance so he didn’t have to imagine too much, but he did still come off too contained for a song that was much bigger than his stage presence.

8:28 p.m. – Avery’s stage presence didn’t fare much better than Kenzie’s, but with a ballad it made much more sense to let his voice be the star. Blake noticed that Avery is getting more comfortable on stage, but gave the edge to Kenzie for being so talented. Nick called Avery’s “emotional texture” the winning recipe in this round, but also said that Kenzie could be a contender for the win. John told Avery that he just needs to bring a little more connection to his songs to reach that next level. Kelly’s decision came down to Kenzie’s talent and the fact that he sounds like the 90s country she loves.

8:38 p.m. – Team Legend was up next with the knockout between John’s two Detroit artists Zania Alaké and Rio Doyle. Rio started rehearsal with “Issues” by Julia Michaels, a choice John was really excited about for its difficulty as a challenging pop vocal. John liked her tone, but asked her to focus on enunciation and Snoop wanted her to remain controlled throughout the vocal. Zania took on the Gladys Knight song “If I Were Your Woman,” much to Snoop’s delight. John said she needs to make the most of the time she has on stage since it’s a condensed version of the song. Rio was able to bring her big voice to the performance in a way that made the song unrecognizable in a good way.

8:50 p.m. – In the other ring, Zania maintained the classic vibe of her song at the beginning, but quickly turned it into a more contemporary sound that had John and Kelly giving her a standing ovation. Kelly told Rio she did a wonderful job, but the “song and the moment” went to Zania. Blake and John agreed that Rio did “Issues” better than anyone else has on the show, but Blake agreed with Kelly that Zania knocked it out of the park. Nick was also wowed by Zania and called her one to watch. John was impressed by Rio, but it was clear he was just as blown away by Zania as the other coaches making it impossible to not choose her as the winner.

9:00 p.m. – Blake’s first pair of the night was Cam Anthony against Connor Christian. Connor wanted to challenge himself so he picked “Youngblood” by 5 Seconds of Summer. Blake warned him that he affects his voice in a way that restricts his voice from opening up the way it should. Cam went with Nina Simone‘s “Feeling Good” to give him a chance to let go. Blake thought the idea was “incredible,” but wanted him to find a place in the song where he can hold a note to entice the voting audience a little more. During Connor’s performance the coaches seemed a bit thrown off by his raspy vocal and a lack of depth or connection to the song.

9:10 p.m. – Cam arrived with all of the depth for his performance, blowing the roof off of the place with an absolutely unbeatable vocal. Nick called Cam’s performance “other-worldly” and John said that he heard things in his performance that he was jealous of. John told Connor that he has something special, but he and Kelly agreed that it wasn’t his best vocal. Kelly called Cam competitive and special, suggesting that she too is threatened by his presence in the competition. Blake reinforced that Connor hadn’t used his breath well enough, and after calling Cam a “star” he gave him the win.

9:16 p.m. – In an untelevised knockout between Jose Figueroa, Jr. and Raine Stern, Jose won out with what Nick called his cool voice on “Break Every Chain.”

9:20 p.m. – Kelly returned to rehearsals with Anna Grace on “If I Die Young” by The Band Perry. The song choice was very personal to Anna and so the emotional connection to the song was inherently there for her. Still, Snoop stressed the need for her to let it go so that she feels the song rather than sings it. Anna went head to head against Gihanna Zoë who chose Pink‘s “Glitter in the Air.” Snoop liked the maturity in her voice, and Kelly helped her find a way to create a moment that leaves the audience on the edge of their seat. Anna’s knockout vocal was pure and smooth with incredible range and power on display throughout.

9:32 p.m. – Gihanna answered Anna’s stellar performance with one of her own, delivering just as much range and as many powerful notes. Blake called Anna’s presence on the show important because she straddles genres, but he was also wowed by Gihanna who he said the sky is the limit for. Nick liked Gihanna’s uniqueness, but thought that Anna chose the perfect song. John thought they both performed confidently and he was clearly taken by both of them. Kelly said her impossible decision would come down to who she thought could navigate the competition better, and for her that was Gihanna. But that left Anna up for grabs and Blake was not going to let her go! He said she’ll have her own lane on his team of “mostly dudes.”

9:42 p.m. – With that, the teams were mostly locked in save for one last knockout: the four way. Team Nick’s Devan Blake Jones chose “Sign of the Times” by Harry Styles, Team Kelly’s Savanna Woods picked “Blake Hole Sun” by Soundgarden, Team Blake’s Emma Caroline sang “Neon Moon” by Brooks & Dunn, and Team Legend’s Carolina Rial chose Demi Lovato‘s “Anyone.” Each of the four got to work with Snoop in individual rehearsals before they each performed their song to earn America’s vote to send one of them through to the live shows.

9:45 p.m. – Emma started it off with a sweet rendition of her song, announcing herself as the country female vocalist of the season. Devan followed her with a falsetto-forward vocal that showed his power and range, but left something to be desired in the performance.

9:54 p.m. – Carolina’s vocal was very reminiscent of Demi’s version, which means that she sang it strongly but failed to make it her own in any way. Savanna closed out the four way with an injection of personality, using the contrast of her rock song to the other three ballads to her advantage. Blake told Emma that he couldn’t be happier with her performance and that he needs her to keep the contemporary country on his team. Nick said that Devan gave his best vocal of the show and is proud of him coming out of her shell. John called Carolina’s song choice brilliant and that her song became a plea to keep her in the competition. Kelly said that Savanna is important to the competition for bringing variety and because representation in music matters, underscoring that she is a different kind of vocalist than everyone else still in the running.

10:00 p.m. – The audience will vote on those four performances overnight, and the one winner to move on to the live shows will be revealed on the first live performance show.