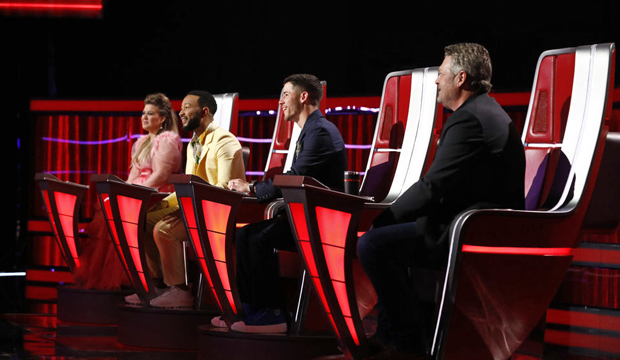 Below, read our minute-by-minute “The Voice” recap of Season 20, Episode 13 to find out what happened Tuesday, May 11 at 8:00 p.m. ET/PT. Then be sure to sound off in the comments section about your favorite artists on NBC’s long-running reality TV show, which coach you’re rooting for and who you think will ultimately join “The Voice” winners list for this 10th anniversary season. Carson Daly hosts the Emmy-winning program.

8:00 p.m. – “Previously on ‘The Voice’!” In last night’s 12th episode, three artists said goodbye after losing the four-way knockout: Savanna Woods of Team Kelly, Carolina Rial of Team Legend and Emma Caroline of Team Blake. Following those eliminations, the 17 artists still in the competition sang for America’s votes on live television. Some excelled, while others faltered under the pressure. We’re about to see which eight contestants have been eliminated from the show, so let’s go!

8:10 p.m. — Team Blake takes center stage and will be the first to hear their results. The artist saved by America was Cam! He will move on to the semifinals, but who will Blake choose to join him? The cowboy gives each of them some kind words before saving Jordan. That was a bit surprising, but Pete or Anna could still be in the running for tonight’s instant save.

8:15 p.m. — Team Nick will be the next group of artists to hear their fate. The artist saved by America was Rachel! She looks shocked, but that result wasn’t much of a surprise. Now who will Nick save? He points out why each of them would be smart choices, but ultimately decides to go with Dana. One of the remaining three will have a chance to compete for the instant save later tonight.

8:17 p.m. — Team Legend is next in the hot seat. Carson announces that the artist saved by America’s vote is Victor! Next, John professes his love for everyone before deciding which two he can do without. John saves Pia which means Ryleigh or Zania will sing for the instant save.

8:25 p.m. — Team Kelly is last to hear their fate. The artist America liked best is Kenzie! Then, Kelly reminds the remaining singers how awful this is for her before deciding to move forward with Gihanna. Corey or Zae will compete for the instant save.

8:30 p.m. — Carson reveals which artist for each team will compete for the instant save. They are Pete (Team Blake), Jose (Team Nick), Ryleigh (Team Legend) and Corey (Team Kelly).

8:38 p.m. — Pete is up first singing “Speechless” for Team Blake. He is such a good singer, but he’s a little off tonight. This wasn’t the right song choice for him and Pete looks like he’s just going through the motions. It was an underwhelming rendition, but Blake tells America to get behind Pete and give him a shot.

8:40 p.m. — Jose is up next singing “Superstition” for Team Nick. It’s a song we’ve heard hundreds of times on various singing competitions throughout the years, and Jose isn’t giving us anything new. It’s overly theatric, but solid vocally. Nick says Jose did his thing and tells America they have to vote for him.

8:47 p.m. — Singing “Lose You to Love Me” is Corey for Team Kelly. Corey is a passionate performer and tonight’s no different. He sounds good singing pop/rock and I won’t be surprised if he wins this instant save based on the performances so far. Kelly pleads for America to vote for Corey and calls his voice “golden.”

8:50 p.m. — Last up for Team Legend is Ryleigh singing “It Will Rain.” I’m curious how they picked the order of tonight’s performances because they aren’t in the same order they were announced. Was Ryleigh given the final spot for a reason? Just curious. Anyways, Ryleigh is a likable performer but she’s a bit inconsistent tonight. If I was choosing the winner of this instant save, I’d go with Corey. But what will America decide?