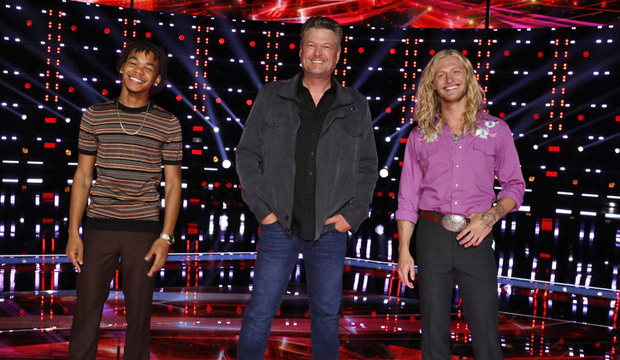 After last week’s elimination bloodbath on “The Voice,” only the Top 9 artists still remain in the running to win Season 20. They are: Cam Anthony and Jordan Matthew Young of Team Blake Shelton, Corey Ward, Gihanna Zoe and Kenzie Wheeler of Team Kelly Clarkson, Pia Renee and Victor Solomon of Team John Legend, and Dana Monique and Rachel Mac of Team Nick Jonas. On Monday night, all nine took the stage again to perform for America’s votes. So who excelled and who cracked under the pressure?

Below, read our minute-by-minute “The Voice” recap of Season 20, Episode 14 to find out what happened Monday, May 17 at 8:00 p.m. ET/PT. Then be sure to sound off in the comments section about your favorite artists on NBC’s long-running reality TV show, which coach you’re rooting for and who you think will ultimately join “The Voice” winners list for this 10th anniversary season. Carson Daly hosts the Emmy-winning program.

8:00 p.m. – “Previously on ‘The Voice’!” In last week’s 13th episode, a whopping eight artists said goodbye for good. The eliminated contestants were: Zae Romeo of Team Kelly, Ryleigh Modig and Zania Alake of Team Legend, Andrew Marshall, Devan Blake Jones and Jose Figueroa Jr. of Team Nick, and Anna Grace and Pete Mroz of Team Blake. In our post-episode poll, a leading 48% of “The Voice” viewers said Pete was most robbed of a spot in the Top 9. How will tonight’s live show play out? Let’s go!

8:01 p.m. – Tonight each artist performs twice — once in a solo of a new song choice and a second time as part of a trio with two other artists. Based on the night’s votes, the top vote-getter from each team will advance to the finale, with the rest singing for one spot in a save. Up first tonight was Victor from Team Legend with MercyMe‘s “I Can Only Imagine,” which is his first time singing gospel on the show. The performance was a night step forward for Victor, showing an aspect of his lane as an artist that we had yet to see, but knew was there. He is still one of the most dynamic stage performers on the season and seeing him enveloped by a chorus underscored that really well. Kelly called him inspiring and moving, Nick admitted to being nervous because of how special Victor is, and John acknowledged the versatility Victor has shown so far and is glad he has now shown his core.

8:10 p.m. – Jordan from Team Blake was up next with John Conlee‘s “Rose Colored Glasses,” a song Blake called one of his own go-tos. Blake encouraged Jordan to lean into the soulful aspect of his country voice for this track, but with a glowing set and a quintet playing with him it was hard to escape the deep country trappings of the performance. Kelly likened the performance to Travis Tritt and thought he showed up when he needed it to count and Blake agreed that he lived up to a crucial point in the competition.

8:20 p.m. – The first trio of the night was Cam, Kenzie and Corey taking on the 70s track “Fooled Around and Fell in Love” by Elvin Bishop. What was so nice about this performance was that it’s a song that wouldn’t have worked if any of the three had taken it on as their own track, but together it provided a diversity in sound that gave each of their parts a special place. The surprise here was definitely Kenzie who was the most out of his element especially against two of the most passionate performers Cam and Corey.

8:29 p.m. – Last week John saved Pia from elimination, creating the chance for her to give us the reggae jam “Turn Your Lights Down Low” by Bob Marley and Lauryn Hill this week. With the full band in support, Pia delivered a wholly realized performance that brought the vibe together. Because we got to hear her sing and rap we saw a new aspect of her talent and gained a better understanding of her versatility. Kelly said Pia performs like she’s already a star, Nick likened it to an awards show performance, and John said it made him smile from ear to ear because she inhabited everything she needed to for that song.

8:41 p.m. – Season 19’s third place finisher Ian Flanigan returned to the stage to perform his new single “Grow Up” with his former coach Blake handling supporting vocals. It was a sturdy rock country song, a style that was wildly popular in recent seasons but that we’re missing from this season of the show.

8:44 p.m. – The competition continued with Team Nick’s Rachel and her take on Christina Perri‘s “Human.” With this song Rachel hoped to show her vulnerable side and to shine a light on her own battle with depression. Though the performance itself was simple, with Rachel remaining static in the middle of the stage, her voice was the focus as she reached huge notes through the chorus and was able to bring it down for small whispery notes as well. John called it a revelatory performance in the sense that she showed the “full range of emotion” with her power, Kelly thought it was smart and cool at this point in the competition, and Nick said he’s proud of her for digging deep this week vocally and emotionally.

8:56 p.m. – As the wild card semi-finalist, Corey enters the night in the most precarious position making his song choice “Arcade” by Duncan Laurence a bold one for how obscure it will be to the audience. In his vocal he showed his range and how well he would fit into the mold of a powerful male rock vocalist. Blake called Corey authentic and pointed out his incredible range while Kelly was so ecstatic by how exciting Corey’s performances are and said the vocal execution was perfect.

9:07 p.m. – For the next trio, Victor, Pia and Dana returned to the 70s with Earth, Wind & Fire‘s “Shining Star.” Through their costuming and choreography it was clear that the three wanted to have fun with this performance and show a light-hearted side of their artistry. That didn’t prevent any of them from delivering strong vocal performances, combining their voices to beautiful group harmonies in parts and building off of one another’s solos in other parts.

9:16 p.m. – Gihanna’s next song was Christina Aguilera‘s “Reflection,” chosen to relate to the “identity formation” that she’s experiencing as a high schooler. Prior to the performance Kelly called it Gihanna’s “ball gown moment,” something that could have quickly aged her, but in that regard the song was perfect because as a Disney song it’s instantly related to childhood innocence. Nick and John were impressed by her poise and beauty and Kelly highlighted how difficult of a song it is to sing and that she executed it so technically with a couple broken spots that made it perfect.

9:28 p.m. – In the final trio, Jordan, Rachel and Gihanna gave us the Fleetwood Mac classic “Go Your Own Way.” Of all the trios this one felt the least authentic, mostly due to the structure of the song relying so heavily on group choruses. No one had their own stand out moment and so instead they each filtered in to one another in an inorganic way.

9:33 p.m. – Returning to the solo performances, Dane arrived with the most current song of the night, “Leave the Door Open” by Bruno Mars, Anderson .Paak, and Silk Sonic. Nick said that the staging would be important to the performance, but he may have forgotten how compelling Dana is as a performer. With her dramatic movement and passionate delivery, Dana is the staging. It was a brilliant choice to take on a male song so that she could fully reinvent it into her own. John said she’s been giving finale-worthy performances and that’s why she deserves a standing ovation every time she sings. Nick said that somehow she topped her performance from last week and that “a star is born.”

9:43 p.m. – Tonight’s penultimate performance was from Cam on “It’s So Hard to Say Goodbye to Yesterday” by Boyz II Men. Unlike everyone else tonight, Cam opened his performance a cappella, slowly entering the evening’s most emotional song choice. Yet somehow that wasn’t the boldest choice he made — to take on a song known for the way the four original artists harmonize on it and pull it off as a solo effort is nothing short of tremendous. John said that Cam continues to take on iconic songs and knocks them all out of the park, Kelly called it incredible because he was able to do his own thing on the song, and Blake doubled down on Cam being a superstar and that he’ll go far in the music business.

9:54 p.m. – For the final performance, Kenzie went with his mom’s favorite song “He Stopped Loving Her Today” by George Jones. With Kelly he decided that he’d perform it from the mic stand, a decision that fit nicely with the lullaby energy of the song. When Kenzie stepped off the pedestal to take a seat on the stool and do the country talk-sing stretch of the song, it was a definite moment that will get all country fans excited and one that will make the performance his most dynamic by far. Nick called it an enjoyable and classic set up and Kelly gushed over him once again, calling his tone and voice once of her favorite ever in country music.