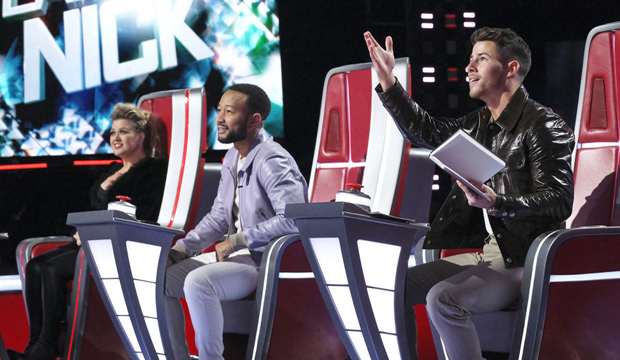 If you’re a fan of seeing big red chairs turn around in dramatic fashion, Monday’s final blind auditions episode of “The Voice” was just for you. After six episodes, the coaches’ teams finally filled up as Blake Shelton, Nick Jonas, John Legend and Kelly Clarkson all pushed their buttons for the last time. Heading into Night 6 of the blinds, each coach had exactly 9 of their 10 artists, so who were the final four members to round out their Season 20 teams? And do any of these last-but-not-least artists have what it takes to go the distance and win the show?

Below, read our minute-by-minute “The Voice” recap of Season 20, Episode 6 to find out what happened Monday, March 22 at 8:00 p.m. ET/PT. Then be sure to sound off in the comments section about your favorite artists on NBC’s long-running reality TV show, which coach you’re rooting for and who you think will ultimately join “The Voice” winners list for this 10th anniversary season. Here is a closer look at each coach’s team (so far):

8:00 p.m. – “Previously on ‘The Voice’!” In the fifth episode, eight more artists made it onto the show when the coaches pressed their “I Want You” buttons during Night 5 of the blind auditions. Team Kelly scooped up Savanna Woods and Anna Grace Felten, Team Legend acquired Rio Doyle and Zania Alake, Team Nick welcomed Rachel Mac and Lindsay Joan, and Team Blake took in Jordan Matthew Young and Savanna Chestnut. But enough about last week — it’s time for the final blind auditions of the season!

8:01 p.m. – First to sing for their shot at making a team was Denisha Dalton, an artist that has worked in many aspects of the music industry (a cappella, girl groups) but is now looking to break out into her own solo career. Her audition of “Pillowtalk” intrigued the ears of Blake first and then to his disappointment John and Kelly as well. Kelly liked her sass and sultry tone, Blake played off not remembering that they’d met at one of his shows before, and John thought she brought style to her voice that he picked up on. In the end, Denisha decided to join Team Legend, completing his team and inspiring, at long last, the full band version of “Welcome to Team Legend.”

8:12 p.m. – Virginian and co-parenting single dad Awari was up next with his take on the 90s hit “Weak.” As soon as they recognized the song, Kelly and Nick were both excited and prepared to hit their buttons to claim their final artist. Indeed they both turned for Awari — Nick expressed his desire to delve deeper into the R&B territory with his song choices in future rounds and Kelly noticed that he kept it emotional without trying too hard. With the tough choice between a jacket and a new notebook, Awari took the booksmart choice and filled the last spot on Team Nick.

8:25 p.m. – With only two spots left in the competition — one on Team Kelly and another on Team Blake — the self-described “timid” Charlotte Boyer arrived with the goal of claiming one of them. She got off to a slow start on “Love Is a Losing Game” and never picked up enough steam to get a chair turn from the available coaches. John said she has a lovely tone, but she stylized the song too much which sacrificed her voice. Kelly thought she chose the wrong song and Blake said he hesitated because he didn’t think he’d be a good coach for her.

8:33 p.m. – Next up was keyboardist Keegan Ferrell with “She Will Be Loved,” scoring an early chair turn from Kelly and a late challenge from Blake for what would become the last head-to-head fight for an artist of the round. Blake made the case that Kelly is the nemesis of Adam Levine and so Keegan should obviously choose him to have a spot as a unique artist on his team, but Kelly countered with her love for pop music and stressing that she’d be the right coach for him. Somehow, Blake’s smear campaign of Kelly worked and Keegan joined his team.

8:46 p.m. – Conner Snow hoped to be the “something special” that Kelly was waiting for with his audition of “This City,” wasn’t able to show her what she was listening for. Nick told him he had good moments, but Conner admitted that nerves got the best of him and that he had trouble focusing on the song itself. Kelly liked ouse of the things he did, but there was hesitancy and advised him to believe in himself.

8:56 p.m. – Instead, Kelly was set to hear out Ainae, daughter of a music marketing mother and a rapper and producer father. With her performance of “Best Part,” Ainae earned Kelly’s support even before reaching the chorus. Nick thought her high register was really unique and John said he regretted that his team was full so he couldn’t turn for her. Kelly was obviously happy to not have to fight for Ainae, thinking that she has a special voice that is different from everyone else on the show.

NEXT WEEK: “The Battles Premiere” will feature advisors Brandy, Luis Fonsi, Dan + Shay, and Darren Criss as well as a guest stint from Kelsea Ballerini, stepping in for an absent Kelly.