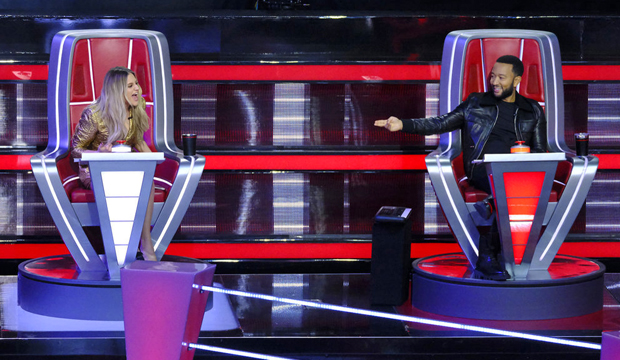 Kelsea Ballerini returned to “The Voice” stage this week as Kelly Clarkson was still out sick (thankfully not with Covid-19). The Grammy-nominated country/pop star joined regular panelists John Legend, Nick Jonas and Blake Shelton as the show continued its trademark battle rounds. This is the stage of the competition where the coaches pair up their artists for showstopping duets and then determine who stays and who goes. They can also hit their “save” or “steal” buttons if they want to keep a losing artist in the competition. So how did the second night of battles play out on Monday night?

Below, read our minute-by-minute “The Voice” recap of Season 20, Episode 8 to find out what happened Monday, April 5 at 8:00 p.m. ET/PT. Then be sure to sound off in the comments section about your favorite artists on NBC’s long-running reality TV show, which coach you’re rooting for and who you think will ultimately join “The Voice” winners list for this 10th anniversary season. Here is a closer look at each coach’s team:

8:00 p.m. – “Previously on ‘The Voice’!” In last week’s seventh episode, Team Blake’s Aaron Konzelman, Team Legend’s Christine Cain and Team Nick’s Awari were all eliminated after their battles. Nick was the only coach to use his “save,” keeping Devan Blake Jones in the competition. And both Kelsea and John used their “steals” — Kelsea stole Avery Roberson from Team Blake and John stole Gean Garcia from Team Kelly. Will any of the remaining saves or steals be played tonight? Let’s go!

8:01 p.m. – The night kicked off with Team Blake’s Cam Anthony vs. Emma Caroline, a pairing of two different genres that lent itself perfectly to the Dan + Shay featuring Justin Bieber song “10,000 Hours.” In the rehearsal session of their own song, Dan + Shay were blown away with goosebumps over what Cam and Emma had achieved. They liked that they made it their own and their ability to harmonize so well with each other. Like Blake warned Emma, she was outperformed by Cam by her more reserved approach to the song–though she sounded great, she was simply singing rather than performing. Cam was able to claim ownership over the song in the performance, drawing all attention to his half of the stage. The other coaches loved Emma’s tone, but were drawn to the choices Cam made and the passion he expressed. Blake told Emma that her body language still reads like she lacks the confidence and that it’s frustrating because her voice is so impressive. With that said, Blake had to stick with Cam going forward. But, Blake wasn’t done with Emma and so, determined to help her turn things around, he hit his button to save her from elimination!

8:17 p.m. – Kelly met up with Luis Fonsi and two of her artists, Halley Greg and Gihanna Zoë, to practice their battle of “Thinking Out Loud” by Ed Sheeran. Luis liked the old school emotional resonance to Halley’s voice and the control that Gihanna had over hers. When it came to Gihanna, Kelly felt like she was missing the intimacy of the song and would be looking for that in the battle if she were to win. In the performance, it was clear by the coaches’ reactions that they were drawn in by Gihanna’s big notes and her ability to scale back for the quieter moments. Blake, Nick and John all complimented Halley on a “quirky” and personality-driven voice, but had to give the edge to Gihanna. Ultimately, Kelsea went with Gihanna based on how much growth they’ve seen already and the potential for her to continue to grow through to the finale.

8:40 p.m. – For his battle of the night, John brought Brandy into the studio to help mentor Zania Alaké and Durell Anthony through their rehearsal of “Emotions.” Brandy noticed Zania’s buttery tone and Durell’s impressive falsetto, but thought that together they could work harder at pairing their voices on the same level. In the song they volleyed the lines back and forth between each other, showing off their incredible ranges and trailing off in the kind of runs that Destiny’s Child created for their version of the song. Blake thought they were both impressive singing at the high register that they did, but gave the edge to Zania for having “that thing” that makes a star. Nick called “that thing” her charisma and boldness, but still called Durell the winner. For John, he thought Durell shined because of his tone and felt that Zania delivered on all the work she put in to control her breath. In the end, John stuck with Zania for stepping up and thinking that she will do well in future rounds.

9:00 p.m. – Blake returned to the rehearsal studio with Keegan Ferrell and Jordan Matthew Young to work through their arrangement of the Train song “Calling All Angels.” Dan + Shay found Jordan believable and committed as a singer while Blake called attention to Keegan’s thoughtfulness and great vocal choices. Going into the performance, Blake was determined to pick the artist that was “swinging for the fences.” On stage, both guys were a bit reserved behind their guitars and didn’t do much to gel their voices into a unified duet. Nick thought that Keegan grew the top of register immensely from his blind audition, but he would have liked to see him “enjoy” the performance more. John thought they were very different from one another in their approach to the song, but gave Keegan the edge for a “flawless” voice and said he’ll grow into his comfort on stage. At the end of the day, Blake thought that they both gave incredible performances, but had to give it to Jordan for already knowing his lane and being able to stay in it. As Keegan exited the stage, Nick hit his button to steal Keegan, claiming that he had thrown Blake off his true angle which was to bring Keegan over to his team all along.

9:22 p.m. – For his battle of the night, Nick and Darren Criss brought together Zae Romeo and Lindsay Joan. Coming from Broadway herself, Lindsay was very familiar with Darren as both a singer and a storyteller. Their song, “Rewrite the Stars” by Zac Efron and Zendaya, was the perfect one to have Darren work with them on. He stressed that they would have to bring their own pop theatrical moment to the song because the drama of the song is already written into it. Nick and Darren were impressed by Zae’s ability to hit notes, but worried that he wasn’t remaining in the moment and connecting with Lindsay. For Lindsay she was more concerned with the smaller moments of the song and comfortable with the big notes. In their performance, Zan and Lindsay bridged the gap between the song’s huge soaring moments with the tender beginning and end. John couldn’t pick between the two, but Kelsea was into Zae’s ability to “hold is own” in the song while Blake thought Lindsay was the more shocking performance of the two. Nick envisioned the song selection as a learning experience for the two of them, and in going with his gut feeling chose Zae as the winner.

9:36 p.m. – We missed out on a full performance by Team Legend’s Ciana Pelekai and Denisha Dalton on “You Broke Me First.” John noted that they both showed themselves to be risk takers. He declared Ciana the winner for her sense of rhythm and as a pop vocalist that he can work with in future rounds.

9:41 p.m. – Kelly had the final battle of the night with Corey Ward and Savanna Woods for the Fleetwood Mac classic “Dreams.” Corey was worried that it was a perfect song choice for Savanna and so he felt like he had a lot of work to do in order to connect with it in the same way. Luis said that Savanna’s rasp “drove [him[ nuts,” but also thought that Corey was ready to be the frontman of a band. All in all, everyone was in agreement that the pair of them worked so well together and that the passion and connection was there. With very different ranges, Corey and Savanna managed to play off of each other so well in their performance, giving room for each other to breathe their own life into the song while also creating something so effortlessly connected. Blake was surprised by Savanna’s range and power, but finds Corey’s “weathered” tone invaluable. Nick also found them both really special as artists and is curious to see in what direction they’ll both go. John leaned toward Corey for the urgency and push in his voice, finding him to be the more compelling artist. Kelsea thought that Savanna was able to use her artistry to make an iconic song her own, and was equally obsessed with not being able to pin Corey’s voice down into any one genre. Faced with an impossible decision between two strong artists, Kelsea decided to stick with Corey as the winner of the battle for the simple fact that he will have more variety to show going forward. But Kelly and Kelsea were not willing to let Savanna walk away and decided to use their save in order to keep her around for another performance!