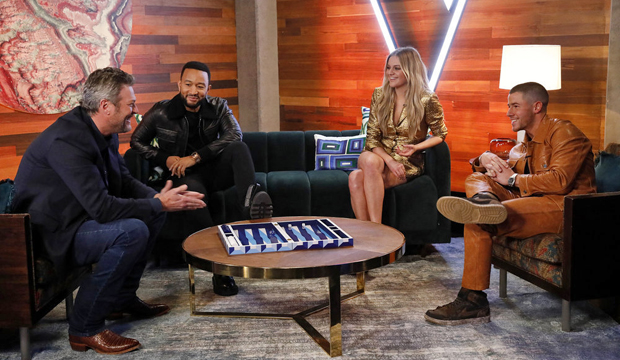 The final battles of “The Voice” aired Monday night on NBC, with the coaches putting the final touches on their teams before next week’s knockouts officially begin. Three of the “steals” and three of the “saves” had already been used, with only Blake Shelton with the power to take someone from another team and only John Legend with the ability to keep an artist on his own team. With Kelly Clarkson still out sick, guest judge Kelsea Ballerini returned to fill in for her, joining Blake, John and Nick Jonas. So how did the third night of battles play out on Monday night?

Below, read our minute-by-minute “The Voice” recap of Season 20, Episode 9 to find out what happened Monday, April 12 at 8:00 p.m. ET/PT. Then be sure to sound off in the comments section about your favorite artists on NBC’s long-running reality TV show, which coach you’re rooting for and who you think will ultimately join “The Voice” winners list for this 10th anniversary season. Here is a closer look at each coach’s team:

8:00 p.m. – “Previously on ‘The Voice’!” In last week’s eighth episode, four artists said goodbye when the coaches decided not to “save” or “steal” them: Halley Greg of Team Kelly, Lindsay Joan of Team Nick, and Durell Anthony and Denisha Dalton of Team John. In tonight’s final battles, all eyes will be on who Blake steals from another team and who John saves from his own team. Let’s go!

8:01 p.m. – Up first tonight was a battle from Team Legend with advisor Brandy in the studio to help coach Victor Solomon and Deion Warren through their rehearsal. On Usher‘s “U Got It Bad,” Brandy was drawn in to Victor’s “conviction” while John was feeling the “natural charisma” of Deion. Brandy asked Deion to start softer in the beginning so that he “always has somewhere to go.” John worked with Victor on feeling a different kind of rhythm in a pop R&B song compared to the church songs he’s used to. For the performance, John asked them to focus on their stage presence and in that regard they both delivered. Like Brandy said, their voices are very similar–so much so that the harmonies were perfect and when they matched choreography it made for a really cool moment between them. Blake thought that Deion had pitch issues, but brought more personality than Victor did. Both Nick and Kelsea refused to pick between the two, calling them both great and leaving the decision to John. Because he was focused on their stage performance to decide the winner, John kept Victor for exceeding his expectations with his physicality and conviction. Surprisingly, John did not use his save on Deion because he’s looking to use it on someone that will have more fireworks vocally for that part of the competition.

8:17 p.m. – For Kelly’s first battle of the night, Luis Fonsi helped welcome Ainae and Anna Grace who Kelly paired for their similar age and style. She gave them Amy Winehouse’s “You Know I’m No Good” because she wanted them to have something from a singer-songwriter that also requires a strong stage presence. Luis was impressed by Ainae’s ability to “live and own” the song immediately (it’s a favorite of hers) while both he and Kelly were shocked that Anna Grace was able to pick it up so quickly having never heard it. They advised both singers to let some notes speak for themselves rather than running through them too quickly. Kelly’s major concern for Anna Grace is showing that she has the confidence and Luis wanted even more energy from Ainae.

8:28 p.m. – When it came to their battle, while both of them brought the drama to their performance their vocals weren’t as strong as we’d expect. Blake gave the edge to Anna for not holding back, but Nick was more into Ainae for the “fresh” parts of her voice. Kelsea found both artists to be very different, making the choice difficult for her to make on Kelly’s behalf, but went with Anna in order to see the growth she can achieve and liking her ability to take notes and apply them.

8:38 p.m. – Darren Criss and Nick brought in Raine Stern and Andrew Marshall for their rehearsal of the Harry Styles track “Adore You.” Nick said that Andrew’s warm tone and range is what he likes about him and Darren was “instantly enamored” by Raine’s confidence and conviction. Together they worked with Raine on elongated her neck in order to strengthen her falsetto and with Andrew on his breath control so that he doesn’t run out mid-lyric. For their performance, Nick expected Raine to bring all the energy and Andrew to be more chill with the song, but after the stage rehearsal he realized that it was unfolding in the opposite way.

8:48 p.m. – During the battle, they both remained fairly low-key in their performance style while still managing to have fun with the slightly stripped down version of the song. John was impressed by Andrew’s “underdog” approach to the song and thought he was a natural with the song. Kelsea thought that Andrew was better suited for the song, but found more artistry in Raine’s approach to the song. Nick agreed with the other coaches that Andrew brought the “magic” to the battle and performed it better, but Raine was stronger in the blinds and still deserving to move forward. Despite his praise of Andrew, Nick stuck with Raine in the belief that she can do better and keeping faith that she’ll achieve that in future rounds. But that wasn’t the end of Andrew’s journey because (to Nick’s great excitement) Blake hit his button and stole him as the clear winner of the battle.

9:01 p.m. – Blake hit up the studio with Dan + Shay to rehearse “Have a Little Faith in Me” by John Hiatt with Pete Mroz and Savanna Chestnut. Blake wanted Pete to hit the song with more passion than he was on his first run-through, which intimidated him next to Savanna who was already bringing it. What Blake loves about her voice is that at times it sounds like it’s going to break, but she holds it together. In the battle, Blake was looking for the one of them that would really sink their teeth into it and make people fall in love with the song again. Though Pete’s intro into the song was subtle and beautiful, when Savanna entered with her smooth, rich tone the song itself began to truly sing. Nick called Savanna’s take “thoughtfully performed,” but John thought she lacked a sense of urgency. Kelsea was drawn to the pockets of Savanna’s vibrato, but she also said that Pete could deliver that performance anywhere and she’d enjoy it. In the end, Blake chose Pete as the winner, noting that he gave it all he got.

9:10 p.m. – For her final battle, Kelly paired two guys she’s looking for more personality from: JD Casper and Kenzie Wheeler. They covered “Fishin’ in the Dark” by Nitty Gritty Dirt Band. The deep country song gave them both that opportunity, but still they approached it in a reserved, straight-forward way. Blake thought JD was held back by having the guitar and kick drum on stage with him, but Nick thought that he found a way to shine in a song that was more suited for Kenzie. Kelsea told Kenzie that he’s really compelling and urged him to not forget how good he is, which is advice he’ll need to take to the next round as the winner of this battle.

9:23 p.m. – Nick paired Rachel Mac and Bradley Sinclair on the Elton John song “Your Song.” The selection made Bradley nervous because of its theatrically while it was one that Rachel connected with during her years in school. That being said, they both found the song daunting because of how bare it leaves the artist’s voice. Nick stressed to them that they have to find a way to have find with the song because in their rehearsal they were not.

9:32 p.m. – When it came time for the battle, both artists were able to bring the theatricality and variance to their vocals that the song required. They managed the small tender moments with the same confidence that they tackled bigger parts with their individual vocal tricks. In the end, all four coaches gave the duo a standing ovation. John called them both perfect. Kelsea was amazed by Rachel’s vocal control, but was taken aback by what Bradley did. Blake found Bradley’s vocal shredding interesting and applauded his ability to hold back form doing it too often, but ultimately gave Rachel the edge because she’ll have more to explore in the future. With the toughest call of the season to make, Nick decided that Rachel was the winner for delivering the better vocal performance.

9:43 p.m. – John ended the round with his youngest artists: Carolina Rial and Rio Doyle. He gave them the song “Somebody That I Used to Know” by Gotye, a song he says he’s been wanting one of his artists to do for many seasons. After one pass through the song, Brandy was blown away and calling them both stars. She said they were singing from their souls and that she was completely moved by what they were doing. John warned Rio about her pitch control and Carolina about her strong vibrato that could overpower everything if she doesn’t rein it in.

9:53 p.m. – We went into the final battle of the night knowing that John would retain both artists for his team, leaving the only mystery to be which would win and who would have to sing as a saved artist. Kelsea said that their stamina on stage was impressive, but that Carolina’s experience stood out between the two. Blake called Rio an incredible singer, but thinks that her vocal affects made it hard for him to understand what she was saying some of the time. Nick thinks that Rio’s voice will keep getting better and so he gave her the edge. The decision for a winner came down to tone and so he selected Rio. That left Carolina on the stage waiting for that slam of the button that meant John was saving her from elimination. He thinks that her big powerful voice will be hard to beat in the four way knockout.