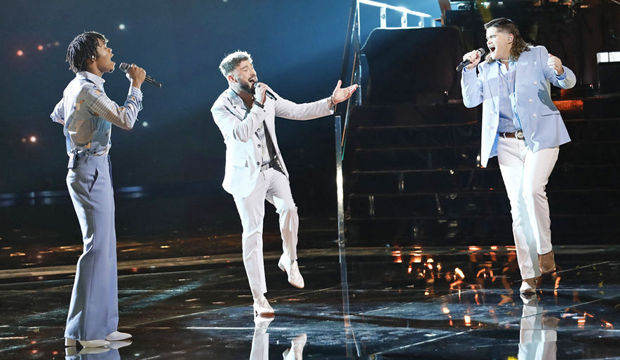 The jitters were everywhere during Tuesday’s results show of “The Voice,” with the Top 9 artists anxiously waiting to find out who made it into the Season 20 finale. At the start of the show, the nine semi-finalists were: Corey Ward, Gihanna Zoe and Kenzie Wheeler of Team Kelly Clarkson, Pia Renee and Victor Solomon of Team John Legend, Dana Monique and Rachel Mac of Team Nick Jonas, and Cam Anthony and Jordan Matthew Young of Team Blake Shelton. Did your favorites advance to the next round, or were they sent home just before the end?

Below, read our minute-by-minute “The Voice” Season 20 Top 9 results recap to find out who was eliminated on Tuesday, May 18 beginning at 8:00 p.m. ET/PT. Then be sure to sound off in the comments section about your favorite artists on NBC’s long-running reality TV show, which coach you’re rooting for and who you think will ultimately join “The Voice” winners list for this 10th anniversary season. Carson Daly hosts the Emmy-winning program.

8:00 p.m. – “Previously on ‘The Voice’!” In last night’s 14th episode, the nine remaining contestants sang for a chance to make it into the finals. The songs they performed for America’s votes were: “I Can Only Imagine” for Victor, “Rose Colored Glasses” for Jordan, “Turn Your Lights Down Low” for Pia, “Human” for Rachel, “Arcade” for Corey, “Reflection” for Gihanna, “Leave the Door Open” for Dana, “It’s So Hard to Say Goodbye to Yesterday” for Cam and “He Stopped Loving Her Today” for Kenzie. The Top 5 artists are about to be named, so let’s get this thing going!

8:05 p.m. — “There’s no time to waste,” declares host Carson Daly as he welcomes Team Kelly to the stage to announce next week’s first finalist. He pulls some compliments for Kelly out of Corey and some props for the show from Gihanna before revealing that Kenzie is a finalist. Corey and Gihanna will compete for the instant save later in the episode.

8:07 p.m. — Up next is Team Legend. Pia gives a tearful thank you to her deceased mother and Victor comments on ministering to millions of souls through gospel last night. Carson then reveals that Victor is a finalist and Pia will compete for the instant save.

8:11 p.m. — Before we get to more results, Season 17 winner Jake Hoot is back to perform his latest single, “I Would’ve Loved You,” with Kelly. It’s pretty cool that Jake has a single with his former coach to help launch his career. They sound great together.

8:15 p.m. — Team Nick takes center stage for their results. Rachel received the most votes and will head to the finale. Dana will compete for the instant save.

8:22 p.m. — Australian rapper Masked Wolf is performing his hit “Astronaut in the Ocean” before Team Blake hears their results. This feels like a joke. I hope it’s the fact that he’s performing “live” via satellite from across the world that explains why his lips aren’t even remotely in sync with the words coming out of his mouth.

8:25 p.m. — It’s finally time to hear the results for Team Blake, although I’m pretty sure everyone knows how this vote went. Can anything stop Cam from dominating this show? Not yet! Cam has been voted into the finale and Jordan will compete for the instant save.

8:33 p.m. — Four singers have secured their spots in next week’s finale, but there’s room for one more! Who will win the instant save? Pia is up first for Team Legend singing “Everything I Wanted.” I would have never expected her to go with a Billie Eilish song and she definitely gives it a fresh take, but she’s also going way off pitch throughout. Unfortunately this just wasn’t the best performance from Pia. John loves that she showcased another part of her artistry and compliments her rich vibrato.

8:36 p.m. — Corey is up next for Team Kelly singing “Iris.” This is a great song choice for him, mostly for the lyrics “I don’t want to go home right now.” He’s certainly an emotional singer but his constant shift from falsetto to screaming is a little distracting. I do think this was effective though and he’s won an instant save before! Kelly compliments Corey’s song choices and she loves that he wears his heart on his sleeve.

8:44 p.m. — Singing “Caught Up in the Rapture” for her chance to become a finalist is Dana from Team Nick. I love this Anita Baker classic, but I’m not sure if I’m the age demographic of a typical voter. It’s a slow jam that is neither terribly exciting nor emotional so I’m not sure it was the right choice in this moment. Nick says Dana is one of the best vocalists to ever appear on this show and hopes she gets to stay another week.

8:47 p.m. — Jordan is leaning into his country rock roots with “Drift Away” for Team Blake. It’s not a difficult song to sing but smartly plays right into that fan base. I’m curious if these artists are singing in reverse order of what the votes actually were? It seems entirely possible. Anyways, Jordan did what he could with this song and if the country fan base is strong enough I won’t be surprised if he prevails. Blake jokes that Jordan was born in the wrong decade, but what’s cool about that is Jordan brings it into his artistry and his sound.

8:50 p.m. — Last up with “Someone You Loved” is Gihanna from Team Kelly. I think she’s such a star and hasn’t really gotten the opportunity to fully blossom this season. This song is a little restrained for a power vocalist like her so I’m not sure what the response will be. Kelly is intrigued by Gihanna as a vocalist can’t believe she’s only 17.  The voting for tonight’s instant save is now open.

8:59 p.m. — After a five-minute instant save vote America has chosen next week’s fifth finalist. Joining Cam, Kenzie, Rachel and Victor is Jordan from Team Blake. Once again, Blake will have two chances at another trophy. Next week a champion will be crowned!