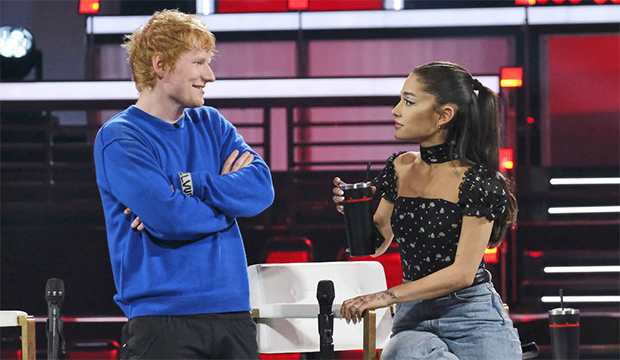 Night 2 of “The Voice” knockouts took place on Tuesday with mega mentor Ed Sheeran giving some expert advice to the four coaches: Ariana Grande, Blake Shelton, John Legend and Kelly Clarkson. In this round, the coaches no longer have a “save” button but they can “steal” a losing artist from another team. During Night 1 we saw both girls use their steals: Kelly stole Katie Rae from Team Ariana and then Ariana stole Holly Forbes from Team Kelly. Did the guys press their buttons tonight?

Below, read our minute-by-minute “The Voice” recap of Season 21, Episode 12 to find out what happened Tuesday, October 26 at 8:00 p.m. ET/PT. Then be sure to sound off in the comments section about your favorite artists on NBC’s long-running reality TV show, which coach you’re rooting for and who you think will ultimately join “The Voice” winners list for this Fall 2021 installment. Carson Daly hosts the Emmy-winning program. Here are the current team breakdowns:

8:00 p.m. – “Previously on ‘The Voice’!” In the 11th episode, the first round of knockouts resulted in four artists going home: Jonathan Mouton (Team Blake), Kinsey Rose (Team Kelly), Sabrina Dias (Team Legend) and Hailey Green (Team Blake). More will sadly be eliminated tonight, so let’s get to it.

8:00 p.m. – Tonight’s 500th episode of “The Voice” makes it the most watched television show of the decade on a single network, according to Carson Daly’s big news at the top of the show. Incredible.

8:01 p.m. – Kicking off the special night was the rehearsal session between BrittanyBree and Samuel Harness. John described them to Ed as his two raspy, well-toned singers with a lot of character in their voices. BrittanyBree chose “Best Part” by HER and Daniel Caesar, explaining that it’s the type of music that bridges gospel and secular that she wants to make. John advised her to be more tender in her approach on this song. Samuel chose “Bruises” by Lewis Capaldi because he identifies with the concept of feeling bruised by the abandonment associated with being put up for adoption by his birth parents. Ed felt the connection to the song in Samuel’s delivery and told him to explode on the chorus by keeping the verses more reserved.

8:06 p.m. – BrittanyBree and Samuel earned a standing ovation from John, Ariana and Blake. Kelly told BrittanyBree that she’s one of her favorite people to take the stage, but also told Samuel that he chose a perfect song and delivered it beautifully. Blake appreciated BrittanyBree, but said that Samuel “had a moment” and so leaned toward him as the winner. Ariana called Samuel’s voice cool and soulful, but even in saying that she was on the edge of her seat for BrittanyBree she, too, gave Samuel the win. John was obviously torn between the two strong performances, calling Samuel’s the best of his so far and telling BrittanyBree that she hits a special chord with him personally. Ultimately, he decided that his winner is Samuel for the authenticity in his connection to the music.

8:20 p.m. – Kelly’s pairing of the night was The Cunningham Sisters and Hailey Mia, her steal from Ari. Hailey’s song choice was “Arcade,” one she picked for its maturity to represent that she’s an old soul that can handle big songs. Ed mentioned that he could sense her nerves, but when she relaxed is when she took control of the song and so she needs to stay in that spot. The Cunningham Sisters went with “Oceans (Where Feet May Fail)” to return to the church songs that they grew up singing. Kelly worked with them on breath and finding spots in the song where they can hold notes a little bit longer.

8:25 p.m. – After the knockout, Blake said that The Cunningham Sisters have been one of his favorites the entire competition, but he acknowledged that Hailey gave a true knockout performance and deserves the win. Ari backed Blake up by calling Hailey’s growth powerful and stunning. John liked the harmonizing of The Cunningham Sisters, but said that the angst in Hailey’s performance was compelling. Kelly said that hearing the message of the song from the young The Cunningham Sisters felt pure, but she was surprised by the huge voice of Hailey even in rehearsals. Frustrated that she’d have to send one of her young artists home, Kelly made the clear cut decision to keep Hailey around.

8:42 p.m. – The third and final knockout of the night was between Ryleigh Plank and David Vogel on Team Ariana. David chose Selena Gomez’s “Lose You to Love Me” to show an intimate aspect of himself as an artist and wanting to take a big female pop anthem and make it his own again. Ed said it was cool that he made it anthemic with an acoustic guitar and he admittedly “geeked out” over the way David chose to arrange it. Ryleigh picked “Midnight Sky” by Miley Cyrus to represent her unapologetic side and because she’s inspired by Miley as an artist. Ari worked with Ryleigh on finding the right notes in the song that work with her voice, supporting the low notes from the front and the back of the song.

8:46 p.m. – By the end of David’s performance, John was screaming “beautiful” at him, but called out Ryleigh’s charisma and individuality as well. He said that David’s choice to go acoustic was so smart and it lit up the entire room. Kelly told David that his choice to bring the guitar enhanced his vocal performance when it could have been a hinderance, but “spirit-wise” thinks that Ryleigh is the total package that a record label would love to get their hands on. Blake said that David put his own stamp all over the stage, but he’s so drawn to Ryleigh’s “obvious thing” as an artist. Ari had a tough choice ahead of her — saying David was special and disarming tonight while Ryleigh has the vocal chops of every genre and the presence of a star. Ari’s winner was Ryleigh, saving her for being “one in a billion.”  But John was ready to pull the trigger on stealing David, adding “something different” to his team and saying that now his team feels stronger.