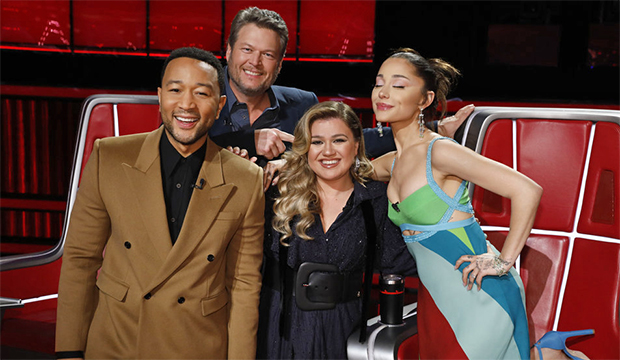 The second week of “The Voice” Season 21 live shows aired on Monday night, with the Top 13 performing live for America’s votes. One by one, each singer gave it their all on the big stage in the hopes of earning enough support from viewers to survive the following night’s results show. The remaining contestants were: Girl Named Tom, Gymani, Hailey Mia and Jeremy Rosado of Team Kelly Clarkson, Jershika Maple, Shadale and Joshua Vacanti of Team John Legend, Jim & Sasha Allen, Holly Forbes and Ryleigh Plank of Team Ariana Grande and Wendy Moten, Lana Scott and Paris Winningham of Team Blake Shelton.

Below, read our minute-by-minute “The Voice” recap of Season 21, Episode 16 to find out what happened Monday, November 15 at 8:00 p.m. ET/PT. Then be sure to sound off in the comments section about your favorite artists on NBC’s long-running reality TV show, which coach you’re rooting for and who you think will ultimately join “The Voice” winners list for this Fall 2021 installment. Carson Daly hosts the Emmy-winning program.

8:00 p.m. – “Previously on ‘The Voice’!” In the 15th episode, America’s votes resulted in eight artists going home: Katie Rae of Team Kelly, David Vogel and Samuel Harness of Team Legend, Raquel Trinidad, Bella DeNapoli and Vaughn Mugol of Team Ariana and Libianca and Peedy Chavis of Team Blake. Tonight, which finalists will shine and who will falter? Let’s go!

8:01 p.m. – At the start of the show Carson let us in on the plan for the week — tomorrow two artists will go home, regardless of what team they’re on.

8:02 p.m. – First up tonight was Team Blake’s Paris Winningham who chose to sing “What’s Going On” in dedication to his grandparents. He delivered a smooth, jazzy rendition of the song in a set that matched the vibe. In his comments, John admitted that he still feels a “pinch of stupidity” for letting Paris go from his team and said that his performance tonight was magical. Blake said that Paris is no longer a secret and that America is catching on to how good and cool he is.

8:10 p.m. – Next to go was Jeremy Rosado of Team Kelly with his dedication of “Because You Loved Me” to his dad. Ariana told Jeremy that she always looks forward to his performances because he “oozes love and heart” and always moves her. Kelly said she was moved to tears because he’s able to draw people in and that’s something that can’t be taught to a singer. In rehearsal she was impressed that he was taking on another big song, especially one by Celine Dion because no one has the guts to sing her songs.

8:20 p.m. – Team Ariana’s first performance of the night came from Ryleigh Plank on “Rhiannon,” dedicated to her sister named Rhiannon. Ariana liked the song choice because it is a side of Ryleigh that she hasn’t shown yet and found her rehearsals of it enchanting. After the performance, Blake called it “really cool” because the band sounded like the original version, but Ryleigh’s voice “took it to a completely different place.” Ariana was proud and called it one of her favorite of Ryleigh’s to date. She says that Ryleigh is more in control of her voice than she’s ever been.

8:31 p.m. – Girl Named Tom from Team Kelly went next with a song they dedicated to their grandmother, “Dust in the Wind.” Going into the performance, Kelly pronounced them as possible winners of the whole show. After their timeless and, frankly, angelic performance, both John and Kelly were on their feet in ovation. John called it stunning and magical because the lead vocal was haunting. Kelly loved that John called it “haunting” because she wanted it to be creepier and reiterated that they’re so gifted as a group and individuals and thinks they can win.

8:40 p.m. – Team John’s first performer was his save, Shadale, who took on “Life Is a Highway” for her truck driver dad and equally hardworking mom. In rehearsal, John suggested raising the key of the song to inject it with more energy that it was previously lacking. She brought that energy to the stage in one of the most lively performances we’ve seen to date. Ariana was surprised by the song choice, but said her incredible energy and infectiousness came through as always. John said that the song is a surprising choice for her, but her commitment makes it the perfect song to match her energy.

8:51 p.m. – Kelly was the focus of Hailey Mia‘s dedication of “I’ll Stand by You” for her support of her in the competition. John liked hearing all the textures of her voice on the song and said the tender moments made it really magical. Kelly called her an incredible vocalist, especially for her age, and that she has an “ethereal” energy to her. She added that she’s so good she’ll be shocked if Hailey doesn’t make it to the finale.

8:57 p.m. – We moved right along to Wendy Moten of Team Blake and her performance of “Blue Bayou,” dedicated to her creative and performing arts teacher from high school. With this song Wendy hoped to show another facet of herself, proving that she can sing any genre put in front of her. Ariana was speechless, shell-shocked that Wendy is still a secret with that flawless of a voice. Blake called out that during the performance all the other coaches were noticing the small impressive moments of finesse that Wendy weaves into her vocals.

9:08 p.m. – For Team John’s Jershika Maple’s next performance she chose “God Only Knows” in dedication to the teachers in her life that changed and saved her life. Once again John suggested raising the key and Jershika took him up on that to great success. Wiping away tears, Kelly and John were both standing for the entire performance and Ariana and Blake joined them at the end for the first full standing ovation. Kelly called it a perfect story to tell in this moment and called herself an idiot for ever letting her go. John said that they’re all honored to be able to witness moments like this from Jershika because she “sings her butt off.”

9:18 p.m. – Next up was Team Ariana’s Jim & Sasha Allen with “Your Song” in dedication to Sasha’s cousin who passed away. Once again the father/son duo took a low-key, folk approach to their performance and knocked it out of the park. Blake told them that the greatest improvement has come from them over the course of the season. Ariana agreed, adding that they keep tackling big songs with care and in a stunning way.

9:29 p.m. – The final artist from Team Blake to perform was Lana Scott with “Humble and Kind” dedicated to her dad. Blake advised her to find a way to hit people in the heart with this song. Blake said that she chose a song that could restrict her as a vocalist and she still performed it so well, asking her to not lose the innocence in her voice.

9:35 p.m. – In Gymani‘s rehearsal of “Made a Way” dedicated to her mom, Kelly said that she’s been one of the most consistent vocalists this season. Kelly was taken aback with tears again tonight, calling out Gymani’s soft moments that she’s able to make so impressive. She said she’s an incredible gift to the competition.

9:44 p.m. – John’s final artist of the night, Joshua Vacanti, chose “You Will Be Found” and dedicated it to his music and drama teachers in high school. Ariana called it stunning, pointing out that having him blocked from her by John still sings. She thinks he’s brilliant and loved it. John reiterated that no one else is like him in the competition and he’s dominating the lane he has to himself with his vibrato and the way intention comes through in every note.

9:54 p.m. – Closing out the night was Holly Forbes from Team Ariana with “The Dance,” dedicated to her stepmom. Ariana liked the song choice because it showed a softer side of her. Blake said that it was a great, simple version of a song he knows changed Garth Brooks’ career and all of country music. Ariana agreed that it’s a special rendition of the song and that Holly is always in her own world and own league every time.