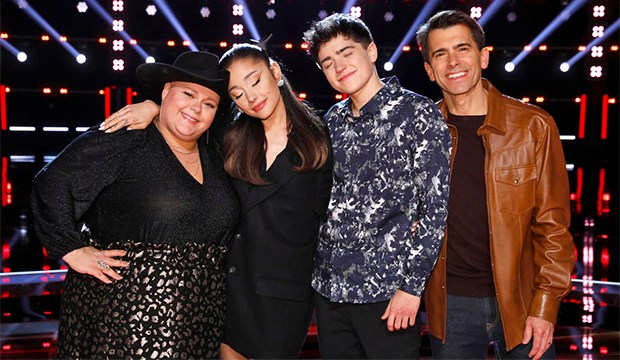 Fan Week on “The Voice” came to a close on Tuesday night as the Top 11 became the Top 10. (That’s right, only one person was sent packing this week, the smallest number since the live shows began.) Coaches Blake Shelton and Ariana Grande performed live with their remaining group members, following last week’s performances by Kelly Clarkson and John Legend. So how did the Top 11 results show play out?

Below, read our minute-by-minute “The Voice” recap of Season 21, Episode 19 to find out what happened Tuesday, November 23 at 8:00 p.m. ET/PT. Then be sure to sound off in the comments section about your favorite artists on NBC’s long-running reality TV show, which coach you’re rooting for and who you think will ultimately join “The Voice” winners list for this Fall 2021 installment. Carson Daly hosts the Emmy-winning program.

8:01 p.m. – Carson is wasting no time this holiday week, getting right to the results at the top of the hour. But first Wendy expressed her hope that she showed the fans her “other personality” last night by having fun and not being so serious. Hailey was able to say how grateful she is to all the fans that supported her so far. With that, Carson announced the first artists saved by America’s vote: Team Legend’s Joshua Vacanti and Team Kelly’s Hailey Mia.

8:06 p.m. – Before Carson returned with more results, Ariana took the stage with her team for their group performance of “FourFiveSeconds.” Sitting around a campfire on stage, Holly and Ariana harmonized for some parts of the song while Jim and Sasha harmonized on the others, but for the chorus they all came together in a really beautiful way. I think it’s the best the artists of Team Ariana have ever sounded!

8:13 p.m. – When the remaining nine returned to the stage to hear more results, Caleb of Girl Named Tom spoke to how much their hometown means to them for all the support they’re giving them. Jershika sent the message to her fans that they should be open to change in life because you never know where it’s going to take you. After their comments, Carson announced that the next to artists advancing to the top 10 were: Team Blake’s Paris Winningham and Team Ariana’s Holly Forbes.

8:21 p.m. – Still waiting to hear the results for the remaining seven, Gymani gave thanks to America for saving her last week and to all the people that have stood by her since the very beginning of her career. Lana said she named her fans “lanterns” as a reminder that they’re “born out of love and light.” The next three artists saved by the vote were: Team Blake’s Wendy Moten, Team Kelly’s Girl Named Tom, and Team Blake’s Lana Scott.

8:30 p.m. – After learning that their entire team advanced to the top 10, Blake’s artists joined him on stage for a fun rendition of “I Can’t Help Myself (Sugar Pie, Honey Bunch).” Each of the four singers passed around lines of the song like hot potato, never coming together to harmonize and instead just taking solo moments for themselves. Afterward there was an unfortunate moment with Wendy tripping to the ground on stage, and she was escorted off to be checked out with help from staff members.

8:34 p.m. – Next, Carson brought the remaining four artists out to learn the final two saved: Team Kelly’s Jeremy Rosado and Team Legend’s Jershika Maple. That meant that after the break we’d hear the Instant Save performances of Gymani and Jim & Sasha.

8:40 p.m. – Before the performances, Wendy was on camera with Carson to assure us all that she’s okay after the fall, just some minor bruises. Up first was Gymani with “Tell Me Something Good,” the super vibey Stevie Wonder track that gave her room to move in and out of her spectacular vocal runs. John called her “unstoppable” for recovering from a small stumble at the beginning of the song with power and resilience. Jim & Sasha Allen followed with “I Won’t Give Up,” the Jason Mraz ballad that offered them the chance to display their harmonizing skills in a really sweet way. Blake reiterated that they’ve shown steady growth week to week and with tears flowing Ariana begged their fans to vote for a brilliant performance.

8:52 p.m. – Ahead of the Instant Save results, Gymani got a chance to thank Kelly for being a cheerleader and a friend for her throughout the competition and Sasha told Ariana that she’s had a huge impact on him this season and been so supportive of their journey. Ariana responded by telling them that they’ll never be able to get rid of her because she’ll support them throughout their career. Kelly told Gymani that she’s shocked she’s in the bottom again and offered her a spot on her “other show” if she needs somewhere else to sing. And winner of the Instant Save and the final artist advancing into the top 10 was Jim & Sasha Allen. That means it was elimination night for Gymani.