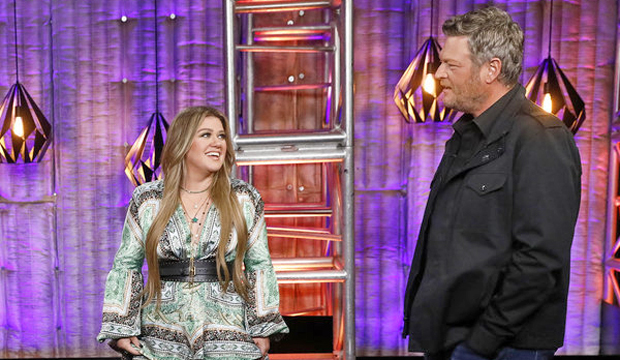 Below, read our minute-by-minute “The Voice” recap of Season 21, Episode 21 to find out what happened Monday, November 29 at 8:00 p.m. ET/PT. Then be sure to sound off in the comments section about your favorite artists on NBC’s long-running reality TV show, which coach you’re rooting for and who you think will ultimately join “The Voice” winners list for this Fall 2021 installment. Carson Daly hosts the Emmy-winning program.

8:00 p.m. – “Previously on ‘The Voice’!” In last week’s episode, the Top 11 results were revealed with Jim & Sasha Allen and Gymani finding themselves in the bottom two. They both sang for the instant save, with the father-son folk duo advancing to the Top 10 and Gymani being eliminated. Elsewhere in the episode, Wendy tripped on stage but thankfully only suffered minor bruises. How will tonight’s episode play out? Let’s go!

8:10 p.m. – Team Ariana’s Kentucky pop singer, Holly Forbes, is kicking off Challenge Week with a disco song by Donna Summer, “Last Dance.” The stage is set with glittering streamers as Holly hits those opening high notes with ease. It moves from the ballad opening to a full on disco jam as Holly rips off her skirt and slides right off key. The song is just too big for her voice. John says she looked in her element. Kelly complimented the skirt rip and thinks it was “really cool.” Ariana falls more and more in love with Holly and says she “killed it.”

8:20 p.m. – Up next is the unbreakable Wendy Moten from Team Blake singing a Dolly Parton classic, “Jolene.” Her right elbow is busted and her left wrist is fractured from last week’s fall, but the show must go on! It’s an intimate setting with a guitar player at Wendy’s side as she sings out from center stage. I like this reserved side of Wendy and it’s probably one of my favorite performances from her. Blake and John are on their feet and John says Wendy is perfect every week. He’s transfixed by her. Kelly calls it “beautifully sad” and Blake emphasizes Wendy’s restraint and compliments her for letting the melody speak for itself.

8:30 p.m. – Next is Team Kelly’s pop singer, Jeremy Rosado, with a country/rock uptempo song by Jimmie Allen & Brad Paisley, “Freedom Was a Highway.” It’s nice to finally see Jeremy step away from the ballads with something more danceable. You can tell this is out of his comfort zone and he’s giving me more of a boyband vibe than country or rock, but he sounds good! Ariana isn’t familiar with the song and says he’s “phenomenal as always.” Kelly enjoyed seeing him so free on the stage and calls his voice “magical.”

8:42 p.m. – It’s time for Team Legend’s Texas soul singer, Jershika Maple, to take on the pop/rock genre with “Ain’t it Fun” by Paramore. Jershika says the tempo is faster than she’s used to and this will definitely test her breath control. As soon as the performance begins I love how this song fits her voice. She’s letting loose and having fun, but you can tell she’s still a little uncomfortable. By the end Jershika does inject some of those gospel inflections we know her for into the song. Kelly compliments Jershika’s energy and power. John says she is great as always!

8:53 p.m. – Team Blake’s country singer Lana Scott is changing things up with “The One That Got Away” by Katy Perry. She plans to “countrify” it, which is fun but also seems to take away from the challenge a bit. That being said, I really like her arrangement and this works well as a country song. Backed by a violin player, a guitarist and four giant wind fans, Lana belts out this countrified pop song and it sounds good! This is actually probably her best performance to date. Props to her for continuing to improve. John joins Blake for the standing ovation while Ariana calls the performance “beautiful.” Kelly thinks it sounded like a Faith Hill pop/country classic. Blake compliments Lana for telling the story and making it work.

9:05 p.m. – Challenge Week continues with Team Legend’s pop singer, Joshua Vacanti, digging into his soulful side with “If I Ain’t Got You” by Alicia Keys. He is connecting it to his upcoming two-year anniversary with his wife. The performance starts off sounding like a Broadway song, but once he gets to the chorus I’m starting to pick up what Joshua is putting down. I don’t think he’s converting many soul fans into Joshua fans, but I think people who already love Joshua will love this performance. Blake says Joshua blew him away yet again. John loves Joshua’s creative risks that he takes each week.

9:15 p.m. – Italian rock group Maneskin stopped by to sing a couple of their hits to break up some of the competition. They’re filling time, but this band is so entertaining to me.

9:25 p.m. — Team Ariana’s Jim & Sasha Allen will be challenging themselves with “Stay” by Rihanna & Mikky Ekko. It’s their first contemporary pop hit after covering so many older classics. Will it be enough to keep them out of the instant save this week? The staging is simple and the vocals are clean and well harmonized, but it doesn’t really push them. John is happy America saved them last week so we got to hear this rendition tonight. Ariana calls it their best performance to date and one of the best performances of the entire season.

9:37 p.m. – Team Blake’s Jacksonville soul singer, Paris Winningham, is tackling one of his favorite songs that he’s never sung before, “Amazed” by Lonestar. Blake says his first big tour he ever booked was opening for Lonestar. Paris feels connected to this song and says it helped him work through emotions over his adoption. This was a great song choice from Paris and he’s killing vocally. This is my favorite performance of the night so far. I love his power notes that sound like he’s screaming, yet somehow remain in tune. John says his family roasted him at Thanksgiving for letting Paris go earlier this season. Blake calls him a “stud” and has no doubt Paris will be in the semifinals.

9:49 p.m. – Team Kelly’s teenage pop singer, Hailey Mia, is challenging herself with “Peter Pan” by Kelsea Ballerini. This song captures Hailey’s innocence, but it doesn’t really go anywhere. She sounds good and hits a few powerful notes near the end, I’m just not sure if this is a performance people will remember at the end of the night. Ariana calls Hailey “stunning” and loves seeing her growth. Kelly says Hailey is unafraid to conquer anything and performed the song “flawlessly.”

9:59 p.m. – Team Kelly’s Girl Named Tom is closing out tonight’s episode with the Coldplay anthem, “Viva La Vida.” This stadium-vibe rock song is very different than the folk sound they’re comfortable with. The performance begins with a nice harmony before they each take turns with some solos. Their vocals really shine on the chorus when they sing as a full trio. It’s also nice to see them have some fun on stage. Blake loves that the group switches it up because they all have great voices, individually. John is imagining how fun their concerts will be. Kelly couldn’t be happier with this trio. That’s a wrap for tonight! Tomorrow night two artists will be eliminated.