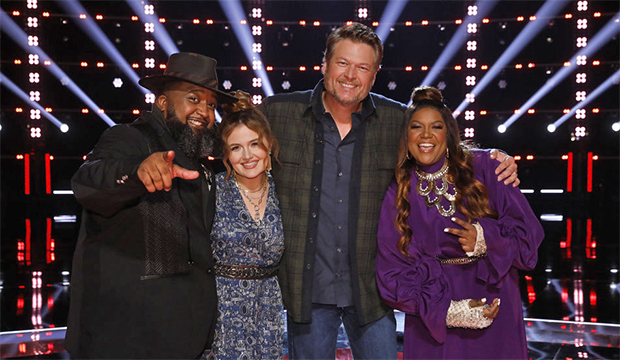 Below, read our minute-by-minute “The Voice” recap of Season 21, Episode 23 to find out what happened Monday, December 6 at 8:00 p.m. ET/PT. Then be sure to sound off in the comments section about your favorite artists on NBC’s long-running reality TV show, which coach you’re rooting for and who you think will ultimately join “The Voice” winners list for this Fall 2021 installment. Carson Daly hosts the Emmy-winning program.

8:00 p.m. – “Previously on ‘The Voice’!” In the 22nd episode, the Top 10 results were announced with the bottom three being Jeremy Rosado, Holly Forbes and Jershika. The live instant save voters preferred Jershika’s “save me” performance, so the other two artists were eliminated from the competition. How will tonight’s Top 8 performance show play out? Let’s go!

8:01 p.m. – Ahead of tonight’s performances, Carson explained that each artist would be on stage for one solo performance and a second time for a 90s duet with another artist. Based on those efforts, five artists from any team will advance to next week’s Finals.

8:02 p.m. – The night kicked off with the solo effort from Jim & Sasha Allen, “Mrs. Robinson.” It was important to them and Ariana that they go back to the “OG” version of their artistry with this performance. John loved the song selection and was glad that they were so at ease and fun with it. Kelly enjoyed that they switched off through the harmonies. Ariana said that there’s a specificity to what they do and that’s what makes them so special in the competition.

8:10 p.m. – Back because of the Instant Save last week, Jershika Maple came into the Semi-Finals ready to compete again with “Don’t Let the Sun Go Down on Me.” The song choice was reflective of Jershika’s determination to continue on in the competition and in achieving her dreams. Blake said that this is the kind of performance on a show that proves she deserved to be saved last week and she made the most of the moment. Ariana said it was stunning and incredible before John reiterated Carson’s comment that it was Grammy-worthy.

8:25 p.m. – The first duet of the night came from Wendy and Paris on “Change the World.” It was the perfect soulful rock song for a duet where they could pass lines back and forth with one another from their stools. Paris took a slight backseat to Wendy here, keeping his own parts relatively smaller than hers despite some good moments in the chorus.

8:33 p.m. – As the only country singer still in the competition, Lana Scott stuck with her lane and faith on “Something in the Water.” The song was “a big thank you” to her mom for all of the support that she’s given her through this journey. John told her that she’s been consistent throughout the competition and that she talks about what her music means to her. Blake said that this week is more important than the finale and that this was by far her best performance of the season.

8:45 p.m. – Team Kelly’s first performer of the night was Hailey Mia on “Someone You Loved.” Kelly said that she thinks it’s the song that will get her to the finale because everyone knows and loves it and it is both mature and innocent at the same time. As her former coach, Ariana expressed that she thinks Hailey has gotten better and better every week. Kelly agreed that tonight is the important week and that tonight she showed how powerful she can be for her age.

8:57 p.m. – Jim & Sasha partnered with Lana on “Hold My Hand,” a song that was released before Sasha was born. All three had their own solo moments on the track and then harmonized beautifully on the chorus. Lana actually stood out here, bringing star energy to the a stage that Jim & Sasha are generally very low key with. In fact I think she inspired the guys to show a new side of themselves break out as more lively presences.

9:00 p.m. – For Girl Named Tom‘s performance, they chose “River” in order to give them each a chance to shine and to return to their “folky ethereal vibe.” John said that he loved the choice of Joni Mitchell and they performed it beautifully. Kelly pointed out that they work up until the performance, changing little parts of it and always doing what they can to make it the best they can. She called them “the most special thing” she’s seen on the show.

9:12 p.m. – The next duet came from Jershika and Joshua on the fun “Hand in My Pocket.” They expected that the song would give them a chance to show personality on stage and sure enough they delivered on that promise with streetwear outfits and a theatrical way of performing the song. Because of their big voices they managed to tweak the traditional arrangement of the song so that they had moments of power and Jershika even pulled out the harmonica!

9:21 p.m. – Wendy Moten returned to her own soul roots with “You’re All I Need to Get By,” a song she dedicated to her husband for being her partner throughout their careers. Blake wanted her to reconnect with who she was as an artist in the earlier weeks and to bring the aspects of her voice that none of her competitors can. After the performance, all the coaches gave her a well-deserved standing ovation. Ariana was speechless, calling it the “most ridiculous” thing she’s ever seen because it was so good. Blake was just as shocked, calling it not “finale worthy” but instead “music history.”

9:33 p.m. – The final duet of the night was “Hold On” by Hailey and Girl Named Tom. The group was excited to have another female vocalist to work from and was determined to have fun with the harmonies. They all moved around the stage really well and volleyed the lyrics from person to person, but Girl Named Tom was clearly most comfortable when matching their own voices together  while Hailey managed to blend in on the harmonies rather effortlessly.

9:42 p.m. – Coming off of an emotional performance last week, Paris Winningham moved forward this week with “Close the Door.” On this song he said it’s a metaphor for closing the door on his life before the show to focus on the journey ahead. Kelly liked that he kept it in his wheelhouse this week and said his voice is so beautiful and raw. Blake told him that he did what he needed to do, especially for having fun on stage and making his heart pound.

9:53 p.m. – The final performance of the night came from Joshua Vacanti with “Ashes,” a song written by the season 9 winner Jordan Smith. With this song he wanted to inspire and show once again that he can take on anything. Ariana claimed the performance as a dedication to herself and mentioned that the technicalities he accomplished were really impressive. John agreed with that, but added that he’s a brilliant storyteller that always meets the moment of the song with his stage performance.