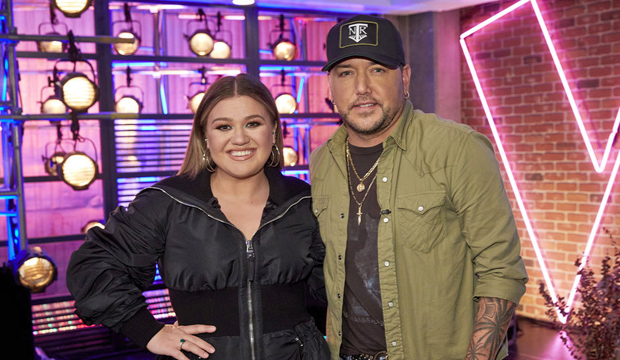 “The Voice” entered the next stage of the competition, the battles, during Monday’s all-new episode. Per tradition, each coach brought along a superstar advisor to help mentor their aspiring artists. They were: Jason Aldean for Team Kelly Clarkson, Camila Cabello for Team John Legend, Kristin Chenoweth for Team Ariana Grande and Dierks Bentley for Team Blake Shelton. In this round, the coaches choose the pairings and the songs, and they also name the winner of each battle. The losing artist can then be “stolen” by a rival coach or “saved” by their own coach. So how did the first set of battles play out?

SEEEverything to know about ‘The Voice’ Season 21

Below, read our minute-by-minute “The Voice” recap of Season 21, Episode 7 to find out what happened Monday, October 11 at 8:00 p.m. ET/PT. Then be sure to sound off in the comments section about your favorite artists on NBC’s long-running reality TV show, which coach you’re rooting for and who you think will ultimately join “The Voice” winners list for this Fall 2021 installment. Carson Daly hosts the Emmy-winning program. Here are the current team breakdowns:

8:00 p.m. – “Previously on ‘The Voice’!” In the sixth episode, the last five artists of Season 21 officially made it onto the show because of their amazing blind auditions. Aaron Hines and Parker McKay joined Team Kelly, Shadale joined Team Legend, KCK3 joined Team Ariana, and Tommy Edwards joined Team Blake. With the blinds all wrapped up, it’s time for the battles to begin. Let’s go!

8:19 p.m. – The first battle of the night is Bella vs. Katie Rae from Team Ariana. They’ll be showcasing their diva chops with “Enough is Enough” by Barbra Streisand and Donna Summer. Kristin is impressed that both singers own who they are and is brought to tears during rehearsals. The performance begins in dramatic fashion with beautiful harmonies before launching into a dance inferno. Bella hits the higher notes but Katie Rae counters with rich, powerful belts. John compliments Katie Rae’s tone and says he would give the edge to her. Kelly agrees with John, but Blake leans towards Bella. Ariana breaks down in tears when the time comes for her to make her first decision. The winner of this battle is Katie Rae. Before Bella is sent home Ariana hits her save button so she is able to keep both of these divas.

8:38 p.m. – Team Legend is up next with Samuel vs. KJ singing their advisor Camila’s song with Shawn Mendes, “I Know What You Did Last Summer.” John likes the raspy character in Samuel’s voice and Camila advises KJ to use her “beautiful” head voice more often throughout the song. When the performance begins I’m instantly struck by the stage presence of both of them. I’d argue they both have more star quality than the prior duo on stage. KJ might have the more pure voice, but I prefer Samuel. Kelly and Blake give the edge to Samuel, but Ariana prefers KJ. Who does John want to keep on his team? The winner of this battle is Samuel. KJ is not stolen so she will be heading home.

9:05 p.m. – Team Kelly is on deck with Girl Named Tom vs. Kinsey. They’re singing “Seven Bridges Road” by the Eagles and with four singers on stage they’ll have to tackle a lot of harmonies. They’re embracing the bluegrass feel to this song which allows the country singer and the acoustic pop trio to blend together.  The performance begins acapella and it sounds like a choir up there! It’s a little odd to have a soloist going up against a trio, but Kinsey holds her own. Everyone sounds good, but there’s something magnetic about those smiles from Girl Named Tom that makes them hard to look away from. Blake says Kinsey could win the show because of the character in her voice. Ariana and John lean toward Girl Named Tom, but John says Kinsey is the best individual vocalist on the stage. Kelly decides the winner of this battle is Girl Named Tom. Before Kinsey has a chance to speak, Kelly hits her save button, quickly followed by steals from John and Blake! Kinsey can now decide if she wants to stay on Team Kelly or try something new. Then, following all the deliberation, Ariana makes history by hitting her steal button as well! It’s the first time three steal buttons and a save have all been used at the same time. I have to say, Kinsey is good but this is sort of overkill. There are a lot of artists yet to sing! Kinsey thinks it over and decides to stay on Team Kelly.

9:20 p.m. – The first battle on Team Blake is The Joy Reunion vs. Peedy. At just 19 years old, Peedy looks a little intimidated to be competing against the seasoned trio. The four vocalists will team up for “Joy to the World” by Three Dog Night, which is a departure for Peedy who first appeared in his blind audition sounding almost like an Elvis Presley impersonator. Dierks thinks Peedy’s sound is “refreshing” but Blake says matching The Joy Reunion’s stage presence will be a tall order. When the performance begins, Peedy immediately looks out of his depth with this trio of top-notch vocalists who harmonize with ease. This is definitely the most lopsided, clear-cut battle of the night. The Joy Reunion should win this contest easily. But, Blake absolutely floors me and chooses Peedy as the winner! Wow! I was not expecting that. The Joy Reunion is sent packing early.

9:40 p.m. – Team Ariana is up again with David vs. Chavon. They’re singing “Sugar, We’re Going Down” by Fall Out Boy because Ariana thinks they will both sound good covering a pop/rock song. Kristin says David has a “cool vibe” and should never stop smiling. She wants Chavon to concentrate on his annunciation. During the performance, David stands out with a look that just screams “rock star.” Chavon sounds good too, but it’s difficult to look away from David when both on are on camera. David looks like a clear winner to me, but I was just wrong about the last battle, so let’s see what Ari thinks! The winner of this battle is David. Chavon gets a lot of compliments but nobody steals him.

9:59 p.m. – Team Kelly will provide the last battle of the night with Jershika vs. Jeremy. They’re singing “Hold On” by Justin Bieber because Kelly loves the idea of two powerhouse vocalists tackling this song. Jason and Kelly both advise them to hold off on all that power through the first verse and keep the audience wanting more. The performance is as powerful as expected and no matter what Kelly thinks, her rival coaches look eager to steal. Blake says he was concerned about Jeremy going up against Jershika, but is so impressed by the way Jeremy stepped up to the plate. Ariana says Jershika’s runs almost catapulted her through the roof. Kelly decides the winner of this battle is Jeremy. John and Ariana both hit their steal buttons for Jershika and she decides to join…??? We will find out at the beginning of Tuesday’s episode!