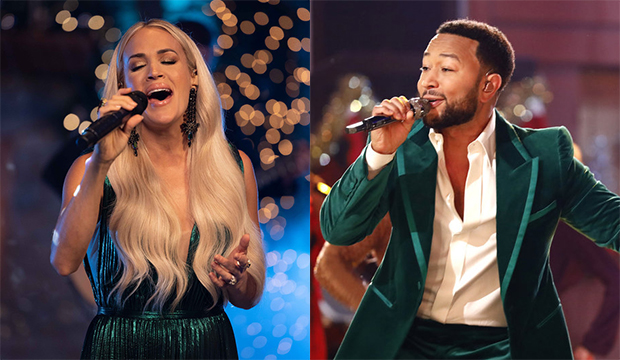 “The Voice” Season 21 finale is turning into a who’s-who of the music industry, with Carrie Underwood, John Legend, Coldplay, Ed Sheeran, Alicia Keys, Walker Hayes, Keke Palmer and Tori Kelly all scheduled to perform. (See the finale details below.) Mark your calendars for Tuesday, December 14 from 9-11 p.m. ET/PT to watch it all play out live on NBC. Oh, and you’ll also find out who will win “The Voice.” Will it be Girl Named Tom (Team Kelly Clarkson), Hailey Mia (Team Kelly), Wendy Moten (Team Blake Shelton), Paris Winningham (Team Blake) or Jershika Maple (Team Legend)?

One day earlier will be business as usual as the Final 5 will perform for America’s votes. The hour-long performance episode airs Monday, December 13 at 8 p.m. ET/PT. Each of the finalists will sing a solo song as well as a duet with their coach. Alas, Ariana Grande is the only coach not to have any artists in the finale, so she’ll be on hand to give her unbiased opinions of the finalists.

Here’s a closer look at each of the A-list finale performances:

*Grammy Award winners Carrie Underwood and John Legend will perform their holiday duet, “Hallelujah,” which appears on Underwood’s Christmas album, “My Gift (Special Edition).” The original song was written by Legend and Toby Gad (“All of Me”) and the music video for “Hallelujah” was directed by acclaimed director and photographer Randee St. Nicholas and was honored as CMT’s 2020 Video of the Year.

*Coldplay will perform a very special performance of “My Universe,” their collaboration with BTS, which debuted at #1 on the U.S. Billboard chart and was streamed more than 100 million times in its first week of release.

*Global superstar and Season 21 Mega Mentor Ed Sheeran will be performing “Shivers,” the latest single off of his new album ‘=’ which debuted at #1 on Billboard 200, marking the 4x-Grammy winner’s fourth consecutive full-length release to top the chart. ‘=’ also features the chart-topping lead single “Bad Habits,” which recently received a Grammy nomination for Song of the Year. Continuing his chart dominance, Sheeran’s “Shivers” and “Bad Habits” are simultaneously sitting in the top 10 on the Billboard Hot 100.

*Artist, singer, songwriter, musician, entrepreneur and former coach, Alicia Keys returns to “The Voice” for a special performance of her new song, “Old Memories.” Keys will perform her instant classic from her new album “KEYS (Original and Unlocked),” a double album out Dec. 10. The album takes a unique approach as it showcases two versions: “Original,” which highlights Keys’ signature musicality and “Unlocked,” which explores the music through a sampled experience.

*Walker Hayes makes his debut performance on “The Voice” with recent smash hit “Fancy Like.” Stereogum calls it “the biggest country crossover hit of 2021,” and it marks the Monument Records artist’s second #1 single and the first from his forthcoming album, set for release in January. “Fancy Like” has been atop every country streaming and sales chart since its release in June. The track has spent a whopping 16 weeks and counting at the #1 spot on Billboard’s Hot Country Songs, is among the top 5 on Billboard’s Hot 100 Songs, top 5 at Country Radio, top 5 at Pop Radio and is the fastest RIAA Double Platinum Certified Country song of the year.

*Don’t miss Keke Palmer and Tori Kelly performing a duet of “Christmas (Baby Please Come Home),” the latest single from the “Sing 2” original motion picture soundtrack. This season’s Top 13 artists will join them and the performance will be introduced by Matthew McConaughey and Nick Kroll from “Sing 2.”