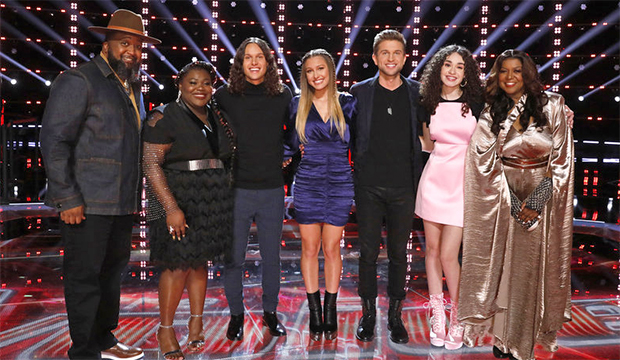 Finale week on “The Voice” Season 21 began on Monday night, with three coaches still in contention to win the title. (Sorry, Ariana Grande.) Team Blake Shelton (Paris Winningham and Wendy Moten) and Team Kelly Clarkson (Girl Named Tom and Hailey Mia) were both represented by two artists apiece, while Team John Legend (Jershika Maple) rounded out the Final 5. Each artist took the stage twice on Monday night to vie for America’s votes — one uptempo song and one ballad. So who excelled and who faltered in their last performances?

Below, read our minute-by-minute “The Voice” recap of the Season 21 finale (Night 1) to find out what happened Monday, December 13 at 8:00 p.m. ET/PT. Then be sure to sound off in the comments section about your favorite artists on NBC’s long-running reality TV show, which coach you’re rooting for and who you think will ultimately join “The Voice” winners list for this Fall 2021 installment. Carson Daly hosts the Emmy-winning program.

8:00 p.m. – “Previously on ‘The Voice’!” In the 24th episode, the Top 4 artists were revealed to be Girl Named Tom, Hailey Mia, Paris Winningham and Wendy Moten. That left the Bottom 4 artists to sing for the live instant save. Jershika Maple made it through thanks to her cover of “Break Every Chain,” thereby sending home Lana Scott (“Things a Man Oughta Know”), Joshua Vacanti (“My Heart Will Go On”) and Jim & Sasha Allen (“Rich Girl”). How will tonight’s performances play out? Let’s go!

8:10 p.m. – First up tonight is Hailey Mia from Team Kelly singing “deja vu” by Olivia Rodrigo. She does a good job of picking relevant, age appropriate songs. This isn’t my favorite vocal performance from her, but her stage presence seems to improve each week. Ariana says this is a great direction for Hailey to go as an artist. John in impressed by Hailey’s control and demeanor. Kelly is proud of her 14-year old pop sensation and pleads with America to vote.

8:20 p.m. – Next up is Paris Cunningham from Team Blake singing “Me and Mrs. Jones” by Billy Paul. Paris dedicated this soul classic to his father, who he calls his #1 inspiration. Paris is an incredible vocalist and this song fits his voice perfectly, I’m just not sure if it’s exciting enough or moving enough to pull in the number of votes needed to win. Ariana says she could watch Paris sing for hours. John says classic soul “oozes” from Paris. Blake says Paris just raked in millions of votes and sold millions of tickets for concerts that aren’t even booked yet.

8:30 p.m. – Team Kelly is up again with sibling trio Girl Named Tom singing “The Chain” by Fleetwood Mac. They begin with their signature harmonies before turning up the volume on this classic rock song. Fans have been responding to this group all season on the iTunes chart and this single will likely soar as well. Blake says Girl Named Tom is country whether they realize it or not. Kelly calls it “perfect.”

8:40 p.m. – The fourth finalist performing tonight is Jershika Maple from Team Legend singing “I’m Goin’ Down” by Mary J. Blige. She has dedicated this to her church community, who she credits for supporting her while she pursues her dreams. This is a signature diva classic that is able to show all of the colors of Jershika’s voice. Kelly calls herself an idiot for letting Jershika go earlier this season. John says Jershika is powerful, soulful, a privilege and a joy.

9:05 p.m. – After a Christmas performance from Kelly, Team Blake’s Wendy Moten will close out the first hour of tonight’s episode with “How Will I Know” by Whitney Houston. It’s a very good vocal performance, but not exactly an inspired one. She looks bored on that stage while she’s belting out this joyful pop anthem. Ariana calls Wendy an insane vocalist and thinks she’s remarkable. Blake is at a loss for words because he is out of great things to say about her.

9:15 p.m. – Hailey Mia from Team Kelly is dedicating her next performance of “idontwannabeyouanymore” by Billie Eilish to all the little girls and boys watching tonight. She wants them to reach for their dreams and overcome any insecurities they might have. She has done a great job of song selection tonight and sounds really good. She definitely has potential to be a current pop star. John declares it his “favorite” performance of hers in the competition. Kelly says she’s “dripping with amazing tone.”

9:30 p.m. – Next up is Paris Winningham from Team Blake singing “Ain’t Nobody” by Chaka Khan. This is a fun, funky change of pace for Paris and it’s nice to see him let loose on stage. Kelly says he has a perfect balance of power and strength. Blake says Paris deserves to win “The Voice” also. At this point Blake will take any winner he can get.

9:40 p.m. – Girl Named Tom from Team Kelly is dedicating their next performance of “Baby, Now That I’ve Found You” by The Foundations to each other. They’re playing it cool as all three sit on stools throughout the performance and it has a similar vibe to the Alison Krauss version. It’s a classic, but they’re making it their own. Ariana calls them stunning and she’s enjoyed watching them each grow, individually, as vocalists. Kelly calls it a flawless performance and thinks Girl Named Tom will soon be performing on awards shows.

9:50 p.m. – Jershika Maple from Team Legend has chosen “Rolling in the Deep” by Adele as her last performance this season. I love her voice on this song and think it’s the perfect choice. It’s slightly different than what I would have expected from her and she’s nailing it. This my favorite performance of the night! John says there are plenty of excellent singers on this show, but no one like her.

9:59 p.m. – Wendy Moten from Team Blake will close out the finale with a performance of “Somewhere Over the Rainbow” by Judy Garland. She is dedicating this performance to her two home towns of Memphis and Nashville. This performance is stunning and uses every trick Wendy has up her sleeve. Wow! John says he has never seen anyone with a gift like hers. Blake says they have never seen anyone like Wendy on this stage in 21 seasons and it may never happen again. And that’s a wrap for tonight!