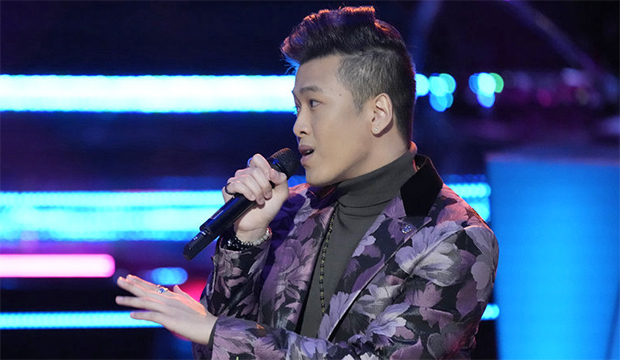 Six artists were sent home during Week 1 of the battles on “The Voice” Season 21, but viewers are really only upset about one of them. In our recent poll results, exactly 50% of voters said they were “crushed” Vaughn Mugol was eliminated so soon by his coach Ariana Grande. Did she make a rookie mistake? The other booted artists this week were Chavon Rodgers (Team Ariana), KJ Jennings (Team John Legend), The Joy Reunion and Tommy Edwards (Team Blake Shelton) and Carolina Alonso (Team Kelly Clarkson).

Vaughn originally sang “The A Team” for his blind audition and earned a trio of chairs-turns from Ariana, John and Kelly. The 27-year-old Philippines native chose to join Team Ariana. In this week’s battle round, Vaughn was paired up with Katherine Ann Mohler for the song “Dilemma,” with Katherine being declared the winner by Ariana. Since none of the other coaches decided to “steal” Vaughn, he was forced to leave the competition.

“That was so good,” Ariana declared after Vaughn and Katherine’s “Dilemma” battle. “The thing about Katherine is you’re so precise and technically perfect. So this was such a stretch for you, and you really surprised the hell out of me tonight.” She continued on, “Vaughn, I loved seeing you step into this completely new persona and your voice is so sweet and what you offer here is so incredible. This is really difficult for me.”

Backstage, Ariana confirmed that she went with Katherine because she succeeded despite “Dilemma” being so far out of her comfort zone. For his parting words, Vaughn told Ariana, “Thank you for this opportunity [and] being able to work with you. One thing’s for sure — I have an amazing story for my patients.” Vaughn now returns to Beaumont, Texas where he’s a full-time nurse.

Here are the complete poll results for who fans were most crushed to see leave “The Voice” during Battles Week 1: