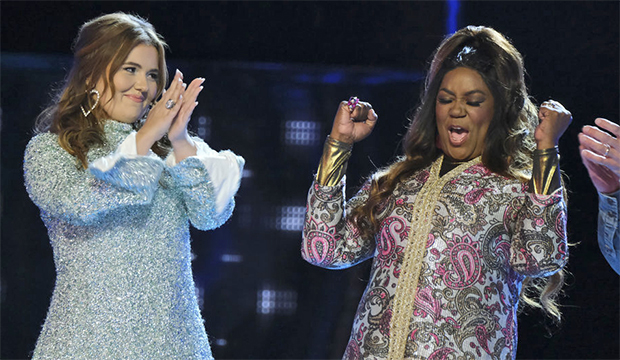 Update: A week after this incident, Wendy revealed that she did in fact break her arm.

“Wendy’s okay,” revealed “The Voice” coach Blake Shelton on social media just moments after Wendy Moten tripped and fell on live TV during the November 23 episode. “Don’t worry, anybody. Hurt her elbow a little bit. I think she’s gonna be fine.” Wendy had just finished singing a group performance of “I Can’t Help Myself (Sugar Pie Honey Bunch)” with Blake and teammates Lana Scott and Paris Winningham and was walking off-stage when she missed a step and took a tumble. Thankfully, fans have no reason to be alarmed. Watch Blake’s video announcement below.

Thank you America 3 for 3! Proud of you Lana, @ParisWinningham, and is there anything that can stop @WendyMoten? The answer is no! #TeamBlake #TheVoice pic.twitter.com/cjHFWlJQJ3

Host Carson Daly later stood side-by-side with the 56-year-old Memphis, Tennessee singer, where she confirmed she was a “little bruised” from her mishap. “But you know what? I’m still ready to go!” she declared, smiling ear to ear.

Wendy has been a fan-favorite all season long, with many viewers thinking she’s a shoo-in to win Season 21 of “The Voice.” In fact, she is Gold Derby’s odds-on front-runner to prevail during the mid-December season finale.

So happy Wendy Moten #thevoice is okay after falling down on live TV. She’s such a trooper! https://t.co/CoUmCzqyfR pic.twitter.com/xzZLGcKGyy

Wendy was a four-chair turn in the blind auditions with her version of “We Can Work It Out,” where she joined Team Blake. In the battles, her cover of “If I Ever Lose My Faith in You” impressed Blake and resulted in the elimination of Manny Keith. Next up was the knockouts, where she ousted Jonathan Mouton following her rendition of “Ain’t No Way.” In the live shows, she advanced thanks to “I Will Always Love You” (Top 21), “Blue Bayou” (Top 13) and now “Freeway of Love” (Top 11).

“Is there anything that can stop @WendyMoten? The answer is no!” Blake tweeted after her accident. The country coach had reason to celebrate on Tuesday night’s episode, as all three of his team members advanced to next week’s round.

Joining Wendy, Lana and Paris in the Top 10 are: Girl Named Tom, Hailey Mia and Jeremy Rosado of Team Kelly Clarkson, Jim & Sasha Allen and Holly Forbes of Team Ariana Grande, Jershika Maple and Joshua Vacanti of Team John Legend. The only artist to be eliminated this week was Gymani of Team Kelly.