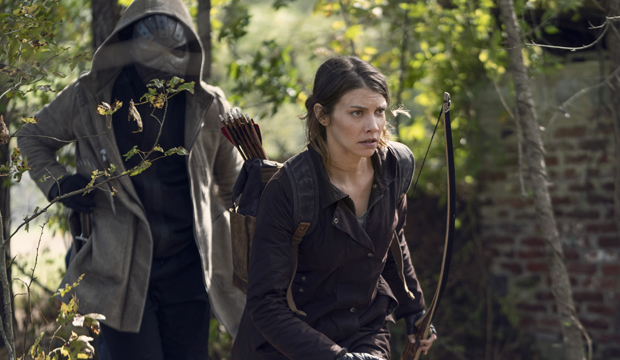 AMC surprised fans of “The Walking Dead” with the news that the Season 10 finale wasn’t actually the finale. Six additional episodes would be added to the season detailing the aftermath of The Whisperer War. The first of those bonus installments is Episode 17, “Home Sweet Home,” which aired Sunday, February 28. It features the long awaited reintegration of Maggie (Lauren Cohan) into the core cast, but a dangerous new threat has followed Maggie back to Virginia. Let’s dive into the top five moments of “Home Sweet Home” below.

Homecoming
After showing up at the hospital just in time to save Gabriel (Seth Gilliam) in the Whisperer battle, Maggie takes time to reacquaint herself with her former stomping grounds. One of the first faces she runs into is Negan (Jeffrey Dean Morgan) who murdered her husband Glenn (Steven Yeun). The widow is understandably shocked and furious to see him outside of his jail cell. Carol (Melissa McBride) and Daryl (Norman Reedus) lead Maggie to the burning wreckage of her former home, Hilltop Colony. Carol is quick to fess up to releasing Negan, who was partially responsible for the destruction of Hilltop. “Alpha needed to die,” Carol says matter-of-factly, “and Negan was our best chance.”

Where’s Georgie?
Maggie and her men join Carol, Daryl, and Kelly (Angel Theory) set up camp for the night on their journey back to Alexandria. We learn that in her time off-screen, she and Georgie (Jayne Atkinson) built a successful community while also sharing knowledge with other survivor groups. One day, Georgie ventured to a newly discovered city while Maggie stayed behind at their community, only for their town to fall in an attack by a violent group. Georgie’s whereabouts are unknown, but might she be at The Commonwealth? It feels like the show is teasing the character’s imminent reappearance.

“It’s Them!”
As they are about to meet up with the rest of Maggie’s party, the group spies a plume of smoke. “It’s them! They’ve found us,” she shouts as they run towards the camp. The camp lies in flame and ashes. Two people have been burned alive, but the rest of the party (including Maggie’s young son Hershel Jr.) are nowhere to be seen. Maggie reveals that the “them” who burned down the camp are called The Reapers. The same group that destroyed her previous community. We discover the mysterious man in the iron mask is named Elijah (Okea Eme-Akwari) wears the face covering not because of scars, but to hide his fear elicited by The Reapers.

Reaper Showdown
Maggie stumbles upon some of her group in the forest, who reveal that they are being hunted one by one. Suddenly, shots ring out and a bullet pierces a man’s neck. Everyone flees as bullets fly from an unseen source. Another woman is hit in the stomach and a second is shot down trying to save her. Daryl quickly surmises that there is just one attacker. Maggie flanks the location but finds an empty sniper nest. She is quickly ambushed by a Reaper in heavy camo and the two enter a brutal fight. She stabs the villain during the battle but gets her foot caught in a trap. Daryl tries to help but the Reaper is unfazed by the arrow that hits his leg. Luckily the rest of the group catches up to Maggie and surrounds the man. Maggie demands to know who he is and why he attacked, but instead of answering the man blows himself up with a grenade. So much for answers. After the explosion, she is drawn to whistling coming from a tree. It’s Hershel Jr. who is thankfully safe and sound.

Alexandria
Maggie agrees to return to Alexandria, saying she’ll “deal with Negan if I have to.” The most important goal is to provide her surviving team members a home. The group arrives at the town only to find the perimeter walls partially destroyed and many of the structures burned. One last parting gift from The Whisperers. But a team is eagerly working to restore their once glorious settlement. “So this is home sweet home?” asks one of Maggie’s men. She surveys the city where she first learned how to lead and smiles: “Yeah, it is.” She grabs her son’s hand and walks him into the place she and Glenn once called home.