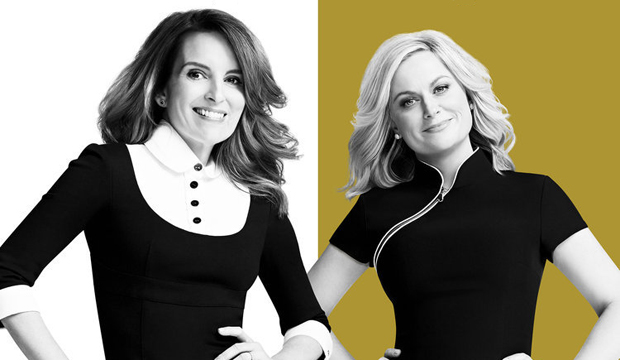 No, you weren’t seeing double. This year’s Golden Globes hosts, Tina Fey and Amy Poehler, really did beam in from two different locations. Fey represented the Rainbow Room of Rockefeller Center in New York while Poehler entertained from the Beverly Hilton Ballroom in Beverly Hills. So how did Fey and Poehler do as 2021 Golden Globes hosts? Vote in our poll below and then defend your choice in the comments section.

When the funny ladies agreed to host this 78th annual edition of these kudos over a year ago, nobody could have predicted the world would be under siege by a coronavirus pandemic. But the show, as always, must go on, and so the Hollywood Foreign Press Association decided to broadcast from two different locations for the first time ever. Presenters appeared live at both venues, while winners in TV and film accepted their trophies virtually from their own homes around the world.

During their bicoastal Golden Globe monologue, the former “Saturday Night Live” actresses joked about the Covid-19 pandemic, the technology that allowed them to be in two places, Meryl Streep previously being “hammered” at Globe ceremonies, Quentin Tarantino‘s notorious foot fetish, the differences between TV and movies in the age of streaming, and “Music” being an “international floparooney.” They also talked about the 87 members of the HFPA, aka the “European weirdos” who have no Black voters but who do have ghosts and cats among their members.

SEEHow to watch the Golden Globes

This marked the actresses’ fourth times as co-hosts of the Golden Globe Awards, following their well-received stints in 2013-15. They’ve both also gone through the elation of winning a coveted statuette, with Fey taking home three Globes for “30 Rock” (two for acting, one for producing) and Poehler claiming one for “Parks and Recreation.” Poehler’s victory actually came while she was hosting the 2014 ceremony. “I’ve never won anything like this!” she exclaimed when she took the stage, this time as a winner.

In the years since their last time serving as Globes ringleaders, the HFPA tried out several different types of hosts, all with varying degrees of success. They went with late night stars (Jimmy Fallon in 2017, Seth Meyers in 2018), an out-of-the-box duo (Andy Samberg & Sandra Oh in 2019) and a reliable comedian (Ricky Gervais, whose five at-bats were in 2010, ’11, ’12, ’16 and ’20).