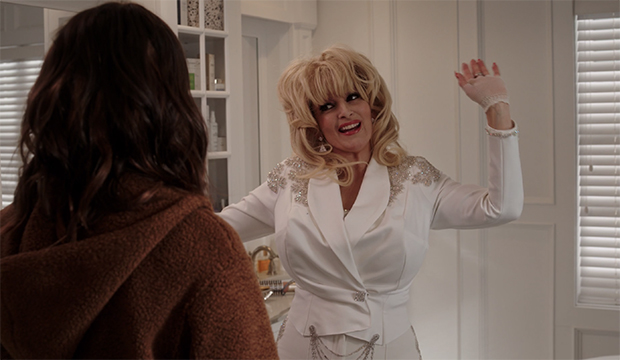 First it was Julia Louis-Dreyfus tying Cloris Leachman’s overall record of the most Emmys by a performer at eight. Now Tina Fey is coming for the legendary actress’ record of three Emmys in the Best Comedy Guest Actress category with her appearance on “Girls5eva,” the Peacock comedy she executive-produces about the members of a former girl band.

Fey appears in the fourth episode of Season 1, titled “Carma.” She plays a version of Dolly Parton who is hallucinated by Sara Bareilles’ Dawn as she tries (and fails) to write a hit song for the reunited girl group. Done up in full Dolly glam and with an exaggerated, slightly off accent, Fey gives a memorable over-the-top performance that manages to stand out from the theatrics of the rest of the episode, especially once you realize she was never supposed to play the role at all. Filming the show during the pandemic made it impossible for the producers to get the real Dolly or someone who could more convincingly play her, so Fey fell into it because she was already in the COVID-tested bubble of the show. And while that might not have been ideal at the time, it’s now created a situation in which she could potentially add yet another Emmy to her shelf and tie a record in the process.

Fey has won a total of nine Emmys over the course of her career and across multiple categories. She’s twice won the award for Best Comedy Guest Actress, both times triumphing for her appearances on “Saturday Night Live” after she left the long-running sketch comedy series. The first win came in 2009 and the second followed in 2016, which was shared with co-host Amy Poehler. Should she earn another nomination and win — she’s currently in second place in Gold Derby’s combined odds and therefore predicted to easily score another nom — she would tie Leachman, who died in January and had won three Emmys in the category during her lengthy career.

Leachman’s first guest actress Emmy came in 1975 for her role as Phyllis Lindstrom, the friend and neighbor of Mary Richards (Mary Tyler Moore) on the classic comedy “The Mary Tyler Moore Show.” At the time, the category was known as Outstanding Single Performance by a Supporting Actress in a Comedy or Drama Series. Her other two comedy guest actress Emmys came for her role as Grandma Ida on “Malcolm in the Middle,” winning in 2002 and 2006.

Currently, Fey sits at 9/2 odds behind Maya Rudolph, who is submitted for her hosting appearance on “Saturday Night Live.” Rudolph actually triumphed in the category in 2020 for playing Kamala Harris. And in fact, four of the last five winners in the category won for appearing on “Saturday Night Live,” which means Fey might be fighting a bit of an uphill battle. However, she’s obviously well liked enough that Emmy voters will likely still take notice of her appearance on “Girls5eva,” however strange it might have been. And she might also get by on name recognition alone — maybe voters won’t even notice it doesn’t say “Saturday Night Live” next to her name. Kidding. Sort of. But they probably will notice that it says “Tina Fey as Dolly Parton” and do a double take.

Of course, this isn’t the only Emmy record of Leachman’s that could potentially be challenged this year. Louis-Dreyfus, who tied Leachman’s overall performer record in 2017 with her sixth Best Comedy Actress win for “Veep,” could break that tie this year if she succeeds in taking home a ninth acting Emmy (she currently has 11 Emmys in total). She’s eligible in Best Drama Guest Actress for her appearance as Contessa Valentina Allegra de Fontaine on Disney+’s Marvel series  “The Falcon and The Winter Soldier.” While she’s on screen for one minute and 45 seconds, people have won for less, so it’s definitely something to watch out for.

SAG Awards film predictions slugfest: 'Belfast' vs. 'The Power of the Dog' vs. 'King Richard,' oh my…