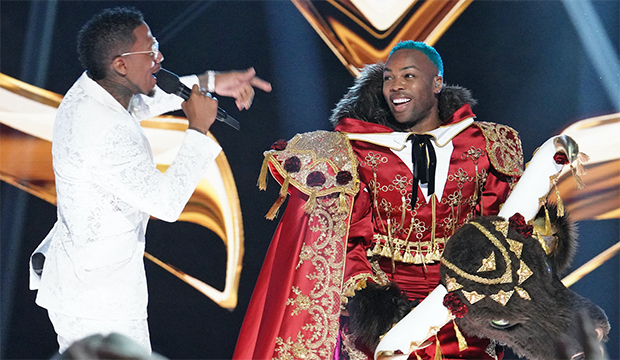 “The Masked Singer” finale concluded on Wednesday night with Queen of Hearts winning the Golden Mask and defeating Bull in one of the closest votes in the history of the Fox reality TV competition. Bull gave an inspiring performance of “You Gotta Be” by Des’ree and a stunning, stripped-down rendition of “Invisible” by Hunter Hayes, but it wasn’t enough to dethrone the Queen of Hearts. The hooved singer was then forced to unmask in front of America and reveal himself as singer-songwriter and choreographer, Todrick Hall.

“Nicole, how many eight counts was I performing before you knew it was me?” Todrick asked during his unmasked interview with host Nick Cannon. “I knew right away,” Nicole responded. “That’s like one of my best friends up here, y’all. I’m so proud that the world gets to see who you truly are.”

“We grow up and we believe in ourselves as little kids,” Todrick expressed. “Somewhere along the line the world starts to pick apart at you and they start to make you realize the things about you that are different. Being inside this costume gave me courage and I’ve faced a lot of fears on this show. It was always so fun an so worth it to get your awesome, amazing critiques every week.”

Although Nicole was the only panelist to correctly guess Todrick’s identity, there were plenty of hints planted in his clue packages each week. The recurring hall clues in Bull’s packages were a nod to Todrick’s last name…Hall. The racing flag was a clue to Todrick’s role as a guest judge on “RuPaul’s Drag Race.” The astronaut in Bull’s package was a clue to the VMA Todrick won working with Taylor Swift. Earlier in the episode Nicole said she felt his performance in her “nails, hair, hips, heels,” because she was quoting one of Todrick’s hit songs.