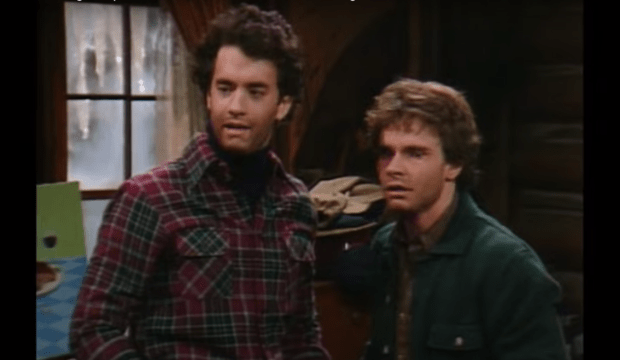 On Tuesday’s “Jimmy Kimmel Live,” guest Tom Hanks got choked up as he paid tribute to his friend and “Bosom Buddies” co-star Peter Scolari, who died on October 22. The improv-heavy ABC sitcom ran from 1980 to 1982 and was the breakout role for both actors. Hanks obviously became more famous than Scolari, but Scolari had a great career as well, appearing in dozens of shows and movies and winning an Emmy in 2016. Hanks and Scolari remained friends for over 40 years.

“Peter walked onto the set saying, ‘We have a guy that’s gonna be the other Bosom Buddy, and he’s already done two fabulous shows that have been canceled.’” Hanks reminisced. “And this we think could be the third.”

Hanks said that for him, Scolari was one of those rare people you meet who changes your life. “He and I met, we picked up the scripts and we started screwing around, and I actually thought, ‘Oh, this is it. This is how it works,’” Hanks said. “This is like a hand inside a glove.”

He said they worked for two years at Paramount Studios, on allegedly unlucky Stage 25. They were the only men on the show, which was about two straight guys living in drag in order to stay in a women’s only residence hotel because it was the only place they could afford. The cast included Holland Taylor (“Who I just had lunch with,” Hanks said), the late Wendie Jo Sperber, Donna Dixon, and Telma Hopkins.

“We were molecularly connected,” Hanks said, “in a way that we started speaking the same language.” They would have long dress rehearsals where they would have to say the same lines over and over again, and so they started “monkeying around with the script,” coming up with new lines, which frustrated the show’s directors. One director said, “If you guys think you could do a better job, why don’t you come up here and direct the show yourself?”

“And Peter was like ‘I’m on my way!,’” Hanks said. Hanks would calm Scolari down. “I’m like ‘Dude, dude, I have ADHD. You have rage issues.”

Hanks introduced an old clip from “Bosom Buddies” that he said showed the chemistry and affection he and Scolari had. It’s fun to see them so young.