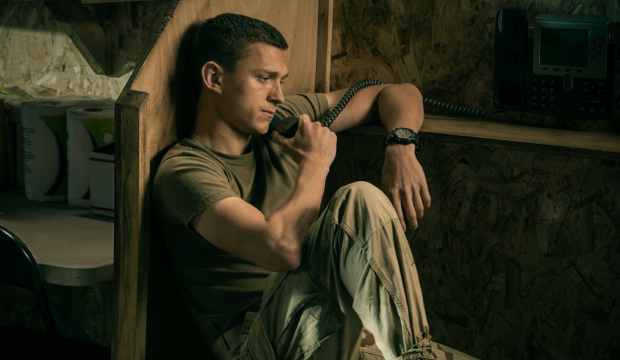 In his new movie “Cherry,” Tom Holland takes a 180 degree turn from his image as wholesome sweet Peter Parker of “The Avengers” and “Spider-Man.”  The 24-year-old British actor swears, has sex, gets married, goes to war, suffers from PTSD, becomes an opioid and heroin addict-dragging his wife into the horror-robs banks, gets arrested and finds redemption in prison. “Cherry” is based on the acclaimed novel by Nico Walker and was inspired by certain aspects from his life. It’s also a real change-of-pace for its directors Anthony and Joe Russo who are best known for their Marvel blockbusters including 2019’s “Avengers: Infinity War.”

This Apple TV+ film will be released on Feb. 26 in theaters and the streaming service just making it under the wire for Oscar consideration. Apple pulled out all the stops for its digital screening and Zoom conversation on Jan. 8. No less than Iron Man himself Robert Downey Jr. hosted the interview which featured the Russo brothers, Holland, Ciara Bravo who plays Cherry’s wife Emily, and screenwriters Angela Russo-Otstot and Jessica Goldberg.

To say Downey was enthusiastic about “Cherry” was something of an understatement. “Wow! What did you think of that, huh? Thank you one and all of that awesome viewing experience. I love this movie.”

Joe Russo explained that he and his brother were “slipped” the book before its publication in August 2018 and were told they were going to love it. The brothers are from Cleveland and “Cherry” just happens to be set there. “Anthony and I read it without knowing what to expect from it. We knew it was about the opioid crisis but did not expect the level of authenticity and truth that we found in the book.  It’s very clear that Nico Walker had gone through a very complicated life experience or collection of life experiences.”

Joe Russo added that the book was very personal to the siblings. “Cleveland and the industrial Midwest in a lot of ways is ground xero for the opioid crisis,” he noted. “There is an existential blight that has gripped that part of the country for the last few decades and a creeping sense of trauma that has infiltrated it. We know a lot of family members who are struggling with addiction and family members who have died from addiction.”

Anthony Russo described the novel as “difficult” and “challenging.” And though they were excited with the prospect of making it into a film, they acknowledged they didn’t know how they were going to transform the book into a movie. “How could we tell a story that’s so complicated and difficult in a way that people are going to watch it as a film?”

As they were trying to sort that out, Holland popped in their minds. “When he did, that sort of broke the whole thing open for us,” said Anthony Russo.  “Tom is so uniquely capable of creating empathy and interest and bringing positive feelings into a very complicated situation and to a character who makes very difficult choices.”

Downey Jr. told Holland: “Tom, I just wanted to say it’s such a departure for you, brother. What was your process being drawn to it and how daunting was it?” It was “really daunting” to Holland. When he read the script, he was blown away by the opportunity to play such a challenging character, but he also quickly realized “Cherry” was telling the story of millions of people. “This is happening to people all around the world. So, I understood the responsibility of trying to do my best and to push myself to the limit.”

He had to change his physical appearance, losing weight and working with makeup artists to get the right look for Cherry as he descends into the rabbit hole of heroin addiction. “Ciara and I sat down and interviewed veterans and people who were suffering from substance abuse,” he noted. “It was so enlightening. I earned so much about a topic I knew very little about. I felt a level of responsibility to portray them and portray their life experiences in the most authentic way possible.”

The actor wasn’t afraid to throw himself into the role headfirst because he had worked with the Russo’s before and knew he had the filmmakers in his corner to “kind of pick up the pieces and put me back together if I needed it. “And then there was his chemistry with Bravo. “To have Ciara as my partner in crime every day was the biggest gift of this process.” “I’m grateful to you as well, just to add to that,” said Bravo.

“I really need to know more about you Ciara,” said Downey. “How did you find the depths to be able to plumb with Mr. Holland as  you went along on this just insane journey? Just as Holland, Bravo felt she had a responsibility to truthfully depict the battle of addiction. “I didn’t take it lightly,” she noted. “It’s something I spoke to the brothers about in depth. I was able to contact a rehab facility in Cleveland who were kind enough to open their doors for me. Just getting the chance to speak to the outpatients there and many of the employees who had gone through the program themselves, especially one nurse in particular who had a startlingly similar journey to Emily’s, I was able to find all these details that made Emily feel like a three-dimensional person.” “Well, you did that,” replied Downey. “Trust me, I was absolutely blown away.”

Before they began their adaptation, the screenwriters went to Cleveland to get sense of the Ohio metropolis. “We sort of walked the walk of the book,” said Goldberg.  “Then we quickly decided we really needed this frame, like something to hold the book together and that became this love story.”

Russo-Otstot added they were very focused on trying to “mine” compassion for the characters- “focusing on the love story and keeping that as a life preserver that lets  Cherry stay afloat in his journey. We really wanted to create a character who felt incredibly nuanced and specific, but also incredibly relatable too as if he could feel like anyone of us.”

Downey was still reeling over Holland’s performance. “I mean, I’ve got to tell you, T-Ho, there were times watching this, me and my missus, where you’re literally unrecognizable as they person we know,” he said.  “You completely suspended my disbelief.”