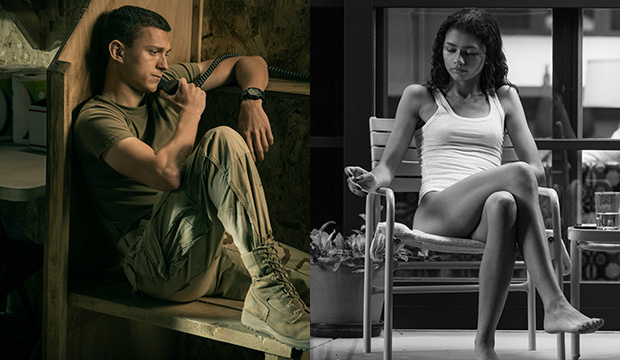 Everyone loves a good awards show reunion. Just look at how much people adored it when Leonardo DiCaprio and Kate Winslet reunited at the Oscars in 2016, where both were nominated and she became an emotional mess when he won. Or when frequent co-stars Chris Evans and Scarlett Johansson presented an award together at last year’s Golden Globes. This year, the Oscars could feature yet another feel-good reunion between potential nominees and “Spider-Man” co-stars Tom Holland and Zendaya.

Holland, who plays Peter Parker in Marvel and Sony’s latest “Spider-Man” films, stars in Apple TV+’s “Cherry,” which will be released on Feb. 26. The film, which is based on the novel by Nico Walker, reunites Holland with “Captain America: Civil War” (2016), “Avengers: Infinity War” (2018) and “Avengers: Endgame” (2019) directors Anthony and Joe Russo. Set in and filmed around the Russos’ native Cleveland, the movie follows Holland’s Cherry, a troubled young man who drops out of college, serves in the Army in Iraq, and returns home to his one true love (Ciara Bravo) only to find himself battling undiagnosed PTSD and drug addiction.

The role is a major departure from the affable Peter Parker, and Holland is currently sitting in 13th in the Best Actor odds (his “Civil War” teammate Chadwick Boseman is currently predicted to win posthumously for his turn in Netflix’s “Ma Rainey’s Black Bottom”). Holland’s age — he’s 24 — may work against him since the Oscars aren’t as kind to young men, but there have been a few twentysomething men nominated the past few years in both categories, including Timothee Chalamet and Daniel Kaluuya, who’s in the running this year in supporting for “Judas and the Black Messiah.”

SEE Oscars update: Zendaya is surging everywhere in our odds as ‘Malcolm & Marie’ rolls out

Meanwhile, Zendaya, who stars as MJ, Peter Parker’s friend and love interest, in “Spider-Man: Homecoming” (2017), “Spider-Man: Far From Home” (2019) and in the third and as-yet-untitled Spider-Man film, is up for a nomination for her performance in the new Netflix film “Malcolm & Marie.” The 24-year-old is coming off an impressive Emmy win for Best Drama Actress for her performance in HBO’s “Euphoria,” and many hope she’ll be able to carry that momentum right on through to the Oscars.

“Malcolm & Marie,” which premieres Feb. 5 and reunites Zendaya with “Euphoria” creator Sam Levinson, is a two-hander that follows a filmmaker (John David Washington) and his girlfriend after they return home from the successful premiere of his latest film and begin digging into the complicated and complex layers of their relationship. In case you somehow haven’t heard, the film is notable for being filmed in quarantine during the COVID-19 pandemic after production on the second season of “Euphoria” was stalled. But the reason the film stands out is Zendaya’s spellbinding performance, which has her currently sitting in fifth place in the odds after surging ahead of Andra Day (“The United States vs. Billie Holiday”) in the wake of the film beginning screenings earlier this month.

In a world as weird and terrible as the one we’re all currently living in, a reunion of any kind between Holland and Zendaya might just be what we all need, especially since the new Spider-Man film, which is currently filming, won’t hit theaters until Dec. 17.