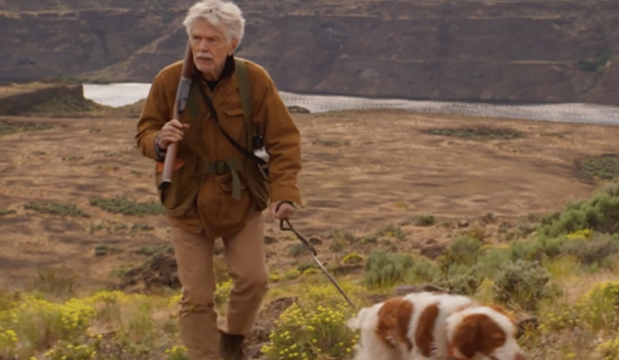 Tom Skerritt is earning the best reviews of his six-decade career for the small, indie drama “East of the Mountains,” which has had a limited theatrical release while also being available on demand. Based on David Guterson’s novel of the same name and directed by SJ Chiro, “East of the Mountains” finds the wiry, blue-eyed actor playing the laconic Ben Givens, a retired Seattle heart surgeon still deep in mourning the death of his wife who learns he has terminal cancer.

Initially, he decides to commit suicide with his hunting rifle at his house but opts to return to with his beloved dog to his small childhood hometown in Washington where he plans to make his death look like a hunting accident. But Ben’s plans go awry when his car breaks down and his dog nearly dies when he attacked by another dog. Mira Sorvino also stars has his worried daughter who doesn’t know that his father is ill

Skerritt , who is also executive producer of the film, gives a quiet, laconic performance as Ben. It’s actually a master class in the brilliance of minimalism. Ben doesn’t waste his life with a lot of words, and just as most men of his generation, doesn’t wear his heart or emotions on his sleeve. Skerritt, who wears his wrinkles well these days, expresses his feelings through his eyes and body language.

“East of the Mountains” is 100% fresh at Rotten Tomatoes with critics lauding the veteran actor. The New York Times’ Lisa Kennedy observed: “This engaging if familiar drama joins a growing number of movies about aging protagonists. Often, these films are rewarding not so much for their story as for the telling performance of an actor who spent his or her career elevating the surrounding ensembles. In a star’s turn, Skerritt reveals the tiniest fissures of vulnerability in his unfaltering portrayal of a cardiologist who is ailing and grieving and fed up with both.”

Skerritt also has appeared in some 200 TV episodes-including such golden oldies as “My Favorite Martian,” “The Real McCoys,” “Bonanza” and “Death Valley Days-winning the 1993 Emmy Award for outstanding lead actor in a drama series for David E. Kelley’s quirky CBS drama series “Picket Fences.” He founded the Seattle-based digital company Heyou Media in 201

When I interviewed actor in 2019 for a 40th anniversary piece on “Alien” for Variety,” Skerritt wanted to talk about how he became an actor and what the craft means to him. He was an English major in college whose career path changed when he saw Orson Welles’ groundbreaking, influential 1941 “Citizen Kane” in an elective class. “I said, ‘I want to write and direct and that level.’ So, I set my standards at that level. I though, if I’m going to write for an actor, I have to know what it is to act. It’s like you don’t know what hot is unless you touch it.”

Later, he met a “talented director who was an interesting guy,” Skerritt noted. “He said ‘You can watch me direct if you want.’ So, I mentored with him for several years before one day he called me up and asked me if I would do a film that was just hired to do.” That filmmaker just happened to be Altman and the movie was “MASH,” in which he played one of the irreverent womanizing surgeons, Duke Forrest.

“I’ve been fortunate to work with the best of the best and learn some of the best stuff,” said Skerritt. “You have an obligation to do the best work you can for that audience who are buying  tickets to come and see a movie. I’ve always felt that way. I think more than anything it’s not about an actor in a movie. It’s about a screenplay being elevated by the inspiration that the writer put into the screenplay that goes to the director that goes to the actors and everybody that’s creatively involved including the crew. The more you engage them with that kind of thinking, the more you have a film that the audience will feel. I recognized that with ‘MASH.’”

And he did admit he nearly turned down “Alien,” in which he played Dallas, the captain of the Nostromo.  “It read well,” noted Skerritt. “There was nobody involved at the time. I thought it’s not a great script, but it’s solid enough. But it was a $2 million budget.  I thought it might be an Ed Wood movie!”

Because he knew Keith Carradine, Skerritt went to see him in Ridley Scott’s award-winning 1977 first feature “The Duelists.” “I thought this is a masterpiece,” recalled Skerritt. “I want to remember who this director is. Then I got a call from one of the producers [of “Alien”] who said they’ve kicked the budget up to ten million and a guy named Ridley Scott is doing it. I said, ‘I’m sold.’ Right there. That’s all I needed to know was Ridley was going to do this. He could make magic out of it.”