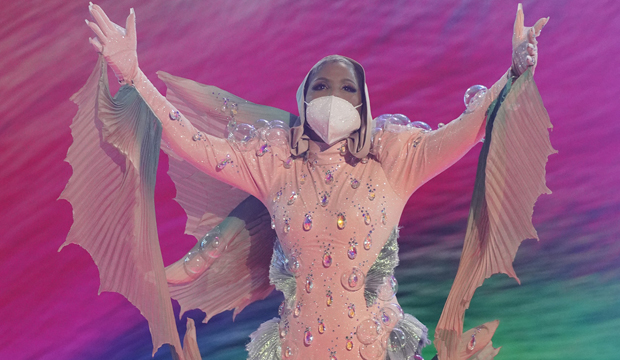 In what host Nick Cannon called “the biggest upset in ‘The Masked Singer’ history,” Pufferfish was eliminated from Group A at the end of Thursday night’s episode, revealing herself to be Grammy-winning superstar Toni Braxton. The panel was gobsmacked to find out the “Unbreak My Heart” songstress had been throwing her voice to fool them throughout her performance of Dua Lipa‘s hit song “Levitating.”

In addition to disguising her unmistakable tone, Braxton was forced to wear a face mask underneath her Pufferfish costume due to having lupus and needing to take extra precaution against Covid-19. Unfortunately, it muffled her voice and didn’t allow her to project as much as she had hoped. “I’ve been in the house the whole pandemic and I wanted to do something fun,” she revealed during her unmasked interview. “I had to be extra precautious and wear a mask underneath the mask.”

“Thank you guys, I had so much fun,” Braxton continued. “You took me from being so scaredy-cat and thinking about this whole thing that’s going on in the world. It was nice to feel light for a moment.” Nick added that in his eyes, Braxton won the game because she stumped the panelists “like crazy.”

Braxton was the third singer eliminated from Group A. Her exit was preceded by Dwight Howard as Octopus and Vivica A. Fox as Mother Nature. The contestants advancing from Group A are Baby, Bull, Hamster and Skunk. “The Masked Singer” will continue on Wednesday, September 29 with brand new singers from Group B.