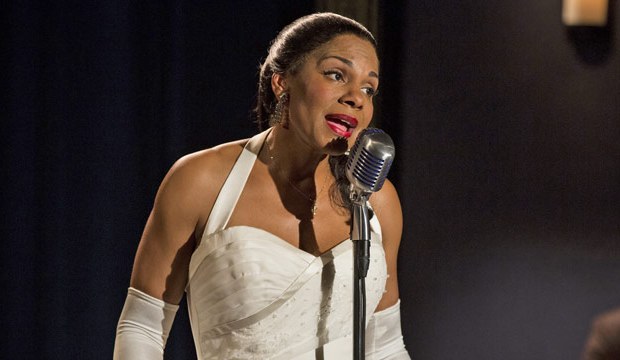 Audra McDonald is the most lauded Broadway performer winning a whopping six Tony Awards in both musical and dramatic categories. And she may be receiving her seventh for the revival of “Frankie and Johnny in the Clair du Lune” when the 74th annual Tonys take place Sept. 26th at the venerable Winter Garden Theatre.

Despite that record, it took a long time for Black artists to be acknowledged by the Tonys, which were first handed out in 1947. It wasn’t until 2004 that a Black actress won for a lead performance in a play: Phylicia Rashad broke this barrier with her win for a revival of Lorraine Hansberry’s “A Raisin in the Sun.” Hansberry was the first Black artist to be nominated for Best Play in 1960 for the original production of “A Raisin in the Sun” as were its director Lloyd Richards and stars, Sidney Poitier and Claudia McNeil.

It took 14 years for the first Black playwright to win the top Tony: Joseph A. Walker for “The River Niger.” August Wilson followed in 1987 for “Fences.” George Wolfe, as producer, won the award in 1994 for “Angels in America: Perestroika” again in 2003 for “Take Me Out.” Ron Simons was the most recent Black winner in 2013 for “Vanya and Sonia and Masha and Spike.”

Richards was the first Black play director to win for “Fences” in 1987. George Wolfe won in 1993 for “Angels in America: Millennium Approaches” and Kenny Leon won in 2014 for the revival of “A Raisin in the Sun.”

The first Black actor to win for his leading role in a play was James Earl Jones in 1969 for “The Great White Hope” (he win again in 1987 for “Fences”). South African artists John Kani and Winston Ntshona shared in the award for “Sizwe Banzi is Dead/The Island” and Denzel Washington on in 2010 for a revival of “Fences.”

PREDICT the Tony winners through September 26

Godfrey Cambridge was the first Black nominee for Featured Actor (Play) for “Purlie Victorious” in 1962 but it wasn’t until two decades later that the legendary South African performer Zakes Mokae won for “Master Harold…and the Boys.” Ten years later, Laurence Fishburne prevailed for “Two Trains Running.” Jeffrey Wright picked up this Tony in 1994 for “Angels in America: Perestroika.”  The most recent Black winner was Courtney B. Vance in 2013 for “Lucky Guy.”

Diahann Carroll made history in 1962 as the first Black winner of Best Actress (Musical) for Richard Rodgers’ “No Strings.” Other winners include Leslie Uggams in 1968 for “Hallelujah Baby!”; Jennifer Holliday in 1982 for “Dreamgirls”; LaChanze in 2006 for “The Color Purple”; Audra McDonald in 2012 for “The Gershwins’ Porgy and Bess”; Patina Miller in 2013 for “Pippin”; and Cynthia Erivo in 2016 for the revival of “The Color Purple.”

Cleavon Little, best known for the 1974 Mel Brooks’ classic” “Blazing Saddles,” was the first Black winner of Best Actor (Musical) for 1970’s “Purlie,” followed three years later by Ben Vereen for “Pippin.’ Other Black winners in this category include Ben Harney in 1982 for “Dreamgirls”; Gregory Hines in 1992 for “Jelly’s Last Jam”; Brian Stokes Mitchell in 2000 for the revival of “Kiss Me, Kate”; Billy Porter in 2013 for “Kinky Boots” and Leslie Odom, Jr. in 2016 for “Hamilton.”

Juanita Hall was the first Black winner at the Tonys, claiming the Featured Actress (Musical) award for “South Pacific” in 1950. Harry Belafonte did the same on the featured actor side four years later for “John Murray Anderson’s Almanac.”

Eighteen years after Hall’s win, Lillian Hayman took home the Tony for “Hallelujah Baby!” Other Black winners include Melba Moore in 1970 for ‘Purlie”; Nell Carter in 1978 for “Ain’t Misbehavin’”; Audra McDonald in 1994 for “Carousel” and in 1998 for “Ragtime”; Anika Noni Rose in 2004 for “Caroline, or Change” and Renee Elise Goldsberry in 2016 for “Hamilton.”

It was 21 years after Belafonte’s victory before Ted Ross was honored for his role as the Cowardly Lion in “The Wiz.” Other Black winners in this category include Hinton Battle, who won for 1981’s “Sophisticated Ladies,” 1984’s “The Tap Dance Kid” and 1991’s “Miss Saigon; Daveed Diggs in 2016 for “Hamilton” and Andre DeShields in 2019 for “Hadestown.”

Geoffrey Holder was the first Black nominee and winner for Director (Musical) for “The Wiz”; he also won in the costume design category. George C. Wolfe, who has received 24 nominations, is the only other Black winner of this category for 1996’s “Bring in ‘Da Noise, Bring in ‘Da Funk.”

Ken Harper, as producer,  was the first Black nominee and winner of Best Musical for “The Wiz.” Among other Black winners of this award: Whoopi Goldberg for 2002’s “Thoroughly Modern Millie”; Tamara Tunie for 2007’s “Spring Awakening” and Ron Simons in 2014 for “A Gentleman’s Guide to Love & Murder.”

It wasn’t until 2008 that there was the first (and to date only) Black winner of Best Book (Musical) when Stew prevailed for “Passing Strange.” Likewise, the only Black composer to win was Charlie Smalls way back in 1975 for  “The Wiz.”

Several Black artists have been recipients of special Tony Awards including Pearl Bailey in 1968; Diana Ross in 1977: Lena Horne in 1981 for “Lena Horne: The Lady and Her Music”; Sarah Jones in  2006 for “Bridge & Tunnel”; James Earl Jones in 2017; and both Harold Wheeler and Jason Michael Webb for “Choir Boy” in 2019.