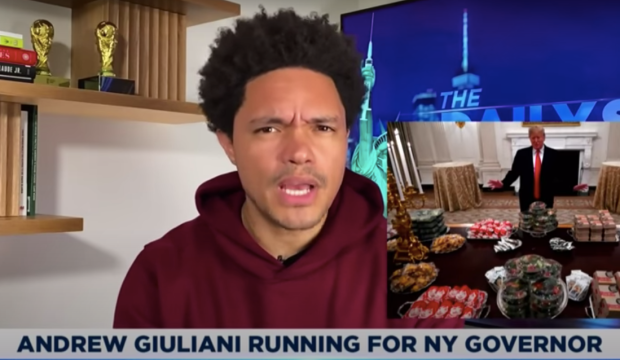 On Tuesday’s “Daily Show,” Trevor Noah talked about an aspiring political dynasty. Andrew Giuliani – son of Rudy Giuliani, former mayor of New York City, advisor to Donald Trump, and “the only lawyer loyal enough to go to jail with his clients,” as Noah quipped – is running for governor of New York. The younger Giuliani’s only political experience is as President Trump’s “sports liaison” but he’s got that golden Giuliani name. He said he’s running on “record-setting crime reduction, which I think the Giuliani name is certainly associated with.”

Noah was skeptical. “The Giuliani name is associated with crime reduction? I mean, I guess if one person is personally doing all the crimes, that does reduce the number of criminals,” the host joked.

“But, yeah, Rudy Giuliani’s son is running for governor off of his dad’s name. And it’s not a bad move,” Noah said. “I mean, considering how much Americans love political dynasties. Bush, Clinton, Cheney, Kennedy, Cuomo — it’s almost like America fought the Revolution to say, ‘We don’t want a king, we want, like, six to eight kings, and they can rotate!’”

Noah was surprised that any politician’s offspring would want to follow in their parent’s footsteps. “Yo, man, personally, I would steer clear of any job that turned my dad into a melting piece of licorice,” he said, flashing that infamous photo of Giuliani’s wet hair-dye running down his face. “I don’t want none of that action.”

“But, of course, Andrew Giuliani isn’t just running as the son of America’s only living gargoyle, he’s also running off his extensive experience as President Trump’s sports liaison,” Noah said. “And I know some people think, sports liaison? Sounds like a bulls–t job, like ‘influencer’ or ‘consultant’ or ‘astronaut.’” (He helped coordinate visits by sports teams to the White House.)

“But, personally, I think he crushed it as the sports liaison,” Noah said. “I mean, who do you think helped Trump get the championship teams all of those cheeseburgers, huh? You think it’s easy explaining to Uber Eats that ordering 500 burgers was not a mistake? Yo, New York needs that executive experience so that we can get all of those burgers.”