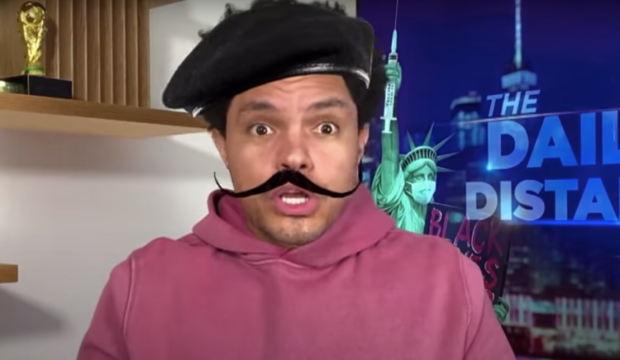 When the Golden Globe Awards took place on Sunday night, the show wasn’t just about the awards. It was also about representation. Last month, a Los Angeles Times investigation found that of the 87 voting members of Hollywood Foreign Press Association, none are Black. “You know you’ve got representation problems when the Proud Boys have more Black members than you,” Trevor Noah said on “The Daily Show” Monday night.

Noah devoted a little bit of time in his monologue to talking about the Globes’ diversity controversy. He noted that everyone involved, from hosts Tina Fey and Amy Poehler to the presenters to the members of the HFPA themselves were “roasting” the Globes for their inexcusable lack of inclusion. He showed a clip from Sunday’s broadcast of HFPA vice president Helen Hoehne saying, “Tonight while we celebrate the work of artists from around the globe, we recognize we have our own work to do. Like in film and television, Black representation is vital. We must have Black journalists in our organization.”

Noah did have a little fun watching the Globes. He said he enjoyed getting a peek inside celebrities’ homes. And his favorite house belonged to “The Comey Rule” star Jeff Daniels, because Daniels had five doors on one and a half walls behind him. “There could easily be 10 to 20 more doors!” Noah screamed. “Some celebrities spend their money on fancy cars and jewelry. Jeff Daniels spends his money on doors. I respect the hell out of that.”