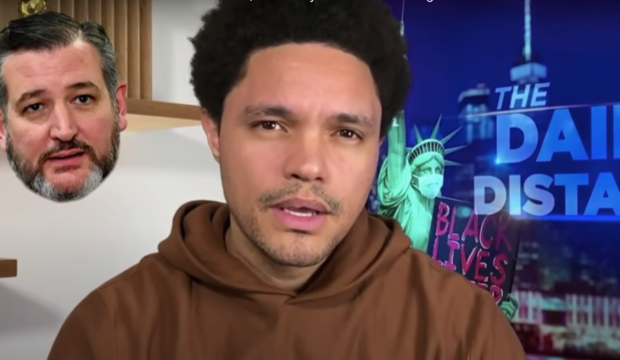 Republican Senator Ted Cruz is in hot water for going on vacation while his constituents don’t have hot water. In the midst of Texas and other Southern states suffering from power outages, a lack of access to clean water, impassable roads, and other infrastructure problems after a deadly winter storm, Cruz took a family vacation to Cancún, Mexico. He was roundly denounced for the decision, with social media users calling Cruz either “Flyin’ Ted” (a play on former President Donald Trump’s nickname for Cruz, “Lyin’ Ted”) or “Fled Cruz.”

It should be no surprise that one of the country’s least-favorite politicians getting embarrassed is catnip for late-night hosts, and Trevor Noah got off some good jokes at Cruz’s expense on Thursday’s “Daily Show.”

Noah joked that Cruz’s selfish trip was actually helping the people of Texas because once they saw pictures of his beach body their eyes would burst into flame and that would heat their homes.

“I mean, look, I get that Ted Cruz is tired,” Noah added. “The man deserves a break after trying so hard to overthrow the government. But this is not the time, Ted! When your constituents said they need clean water, they didn’t mean go find a wet T-shirt contest in Cancún.”

It got even worse for Cruz when he got caught and instead of owning up to his mistake, he blamed his daughters, saying that they wanted to go on vacation because school was closed, and he was just trying to be a “good dad.”

“Oh, I see — we all got this thing wrong,” Noah said. “Ted Cruz wasn’t going on vacation, people; he was just chaperoning his girls on the flight to Cancún.” It’s like a reverse ‘Taken,’” Noah cracked, doing an impression of Cruz as Liam Neeson: “I want you to know that I am a man with absolutely no skills whatsoever, and I’m going to safely accompany my daughters on this trip.”

Noah concluded by offering Cruz a little bit of grace and understanding for his behavior. “Maybe Ted Cruz just doesn’t know what a good dad is. I mean, his dad killed JFK.”