Former President Donald Trump’s second impeachment trial began on Tuesday, and it was, of course, eventful and memorable. The prosecution team shared a disturbing video of rioters in the Capitol intercut with Trump’s words of encouragement at a rally that same day. Impeachment manager Rep. Jamie Raskin, meanwhile, gave an emotionally devastating speech about the terror he and his family faced during the storming of the building. But it was the bizarre, rambling opening statement from Trump’s attorney Bruce Castor that not only reportedly had Trump enraged as he watched it on TV but struck a chord with Trevor Noah.

“You can definitely tell this impeachment is the sequel, because the sequel always has to turn things up to 11. The original impeachment was like: ‘Listen to this diplomat describe a phone call as you ponder the meaning of quid pro quo,’” Noah said on Tuesday’s “Daily Show,” putting on a nerdy voice and glasses. “But this impeachment is like ‘Michael Bay presents – bum bum bum! – Impeachment 2: We’re Storming the Capitol!”

After the video, Trump’s legal team presented their case, and “after how it went today, I’m worried that Trump is gonna get the chair,” Noah joked. The host played some lowlights of Castor’s speech, which began with the attorney mistakenly calling himself the prosecutor, not the defense.

“Good lord,” Noah said. “Trump’s lawyer is giving the speech you give when you have to stall because the actual lawyer is stuck in traffic. Trump is probably watching this at home like ‘What the hell is wrong with this guy? The ad on the side of the bus said he was the best. Why would he be on the bus if he’s not the best?’” (Noah’s Trump impression is one of the best.)

Then Noah got to the sick punchline: “It doesn’t actually matter what this guy says. He could get up there and trim his pubes for hours. Because the jury has already reached its verdict.” Only six Republican senators out of 50 even voted in favor of having the trial, which means there’s no chance that Democrats will get enough votes to convict Trump.

“And I know that this vote might make the trial seem pointless now, yes, but just because we know how the trial will end, it doesn’t mean the trial shouldn’t take place,” Noah added. “I mean, when you’re watching ‘Law & Order,’ right, do you turn it off in the first five minutes when the cops interview a dentist who obviously killed his patient to cover up an affair? Of course not! You watch the whole thing because then you get to say ‘I knew it!’ when you end up being right.”

Trump was the law & order president, after all. 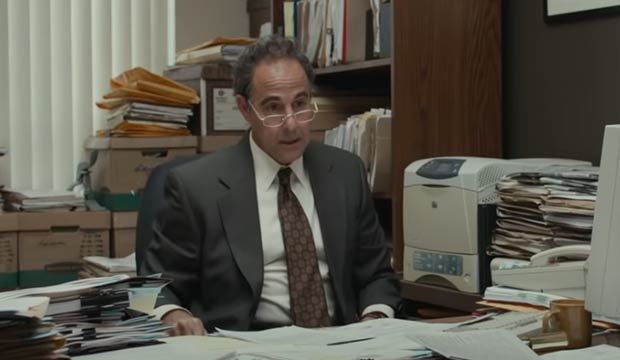 Stephen Colbert on gender-neutral Potato Head: 'Won't someone think of the tots?'

Even Jimmy Fallon is making fun of Ted Cruz