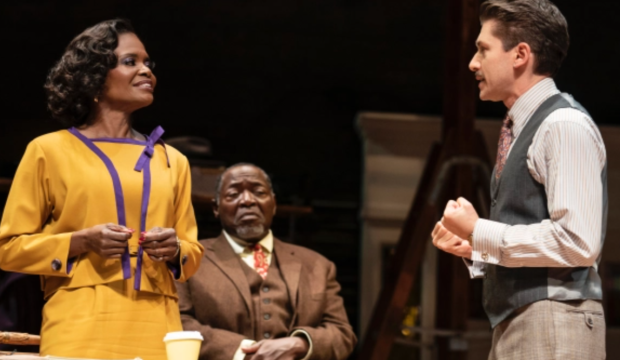 Many plays and musicals have had to wait a long year and a half to open on Broadway, with premieres delayed because of the coronavirus pandemic. But none are more overdue than Alice Childress’ “Trouble in Mind.” First staged in 1955, the play never arrived on Broadway until now. After almost seven decades, “Trouble in Mind” opened at the Roundabout Theatre Company’s American Airlines Theatre on Nov. 18.

“Trouble In Mind” centers on the rehearsals of a poorly-written play about lynching in the South penned by a white playwright. Tony Award winner LaChanze stars as Wiletta, an actress in the play who knows how to navigate the racism of show business but is becoming increasingly exasperated doing so, especially as she works with condescending director Al Manners, played by Michael Zegen. Charles Randolph-Wright directs the ensemble cast.

With this Broadway mounting of “Trouble in Mind,” Childress is finally receiving her due from critics. Adam Feldman (Time Out New York) calls the production “exemplary,” writing that it feels like “a revelation.” He praises Childress’ text, which is bursting with “astute points about financial realities, funny observations about backstage power dynamics… and, especially, knowing badinage among the play-within-a-play’s Black cast.” He also applauds much of the ensemble, including the “magnificent” Chuck Cooper and star LaChanze who is “this production’s other revelation.”

Labelling “Trouble in Mind” a Critic’s Pick, Jesse Green (New York Times) similarly deems the production “eye-opening,” crediting director Randolph-Wright’s “lively staging [that] leads with warmth and humor.” Green also singles out LaChanze, who delivers a “wonderfully rangy and compelling performance,” and Cooper, who “gives us a brilliant, horrific aria, filled with Method detail, that makes you see as if you were behind his eyes.” Of the design, Green singles out Arnulfo Maldonado’s “perfectly period set.”

Ayana Prescod (Variety) credits Childress’ work for its “trenchant observations,” but thinks the production “takes too long to get to the point.” Nevertheless, Prescod highlights the show’s “stellar acting” and “marvelous direction.” “LaChanze is this production’s heartbeat,” she writes, as she “delicately embodies a middle-aged woman who deeply loves an art form that ignores her.” In addition to the “compelling” Cooper, Prescod singles out the “hysterical” Jessica Frances Dukes and “convincing” Zegen, while also commending Tony-nominee Emilio Sosa’s “dazzling costume design.”

Although the 2021-2022 Broadway season is just beginning, “Trouble in Mind” looks like an early contender at the Tony Awards. The long-awaited and long-overdue arrival of Alice Childress on Broadway certainly did not disappoint, and a nomination for the play in the Best Revival category would not only acknowledge this production, but would also earn Childress a posthumous Tony nomination as playwright.

LaChanze is in a similarly strong position in the Best Actress race. The Broadway favorite has three Tony nominations and won for the original production of “The Color Purple” (2006), but she has never been nominated her work in a play, in part because this is only her second drama and her first in a dramatic leading role. She will have no shortage of competition in what is shaping up to be an extraordinary season of performances in plays from the likes of Emily Davis (“Is This a Room”), Deirdre O’Connell (“Dana H.”), Uzo Aduba (“Clyde’s”), Phylicia Rashad (“Skeleton Crew”), Sarah Jessica Parker (“Plaza Suite”), reigning Tony champion Mary-Louise Parker (“How I Learned to Drive”), and Ruth Negga (“Macbeth”), amongst others. The glowing notices will likely help her land a well deserved nomination, though. After almost 25 years since his Tony victory for “The Life,” Chuck Cooper could return to the Tony Awards, too, for his standout supporting performance.

What might hamper some of the show’s awards prospects is its limited run, which is set to conclude on Jan. 9. “Trouble in Mind” is one of nine play revivals opening during eligibility, which include “Lackawanna Blues,” Ntozake Shange’s “for colored girls who have considered suicide / when the rainbow is enuf,” Neil Simon’s “Plaza Suite,” “Take Me Out,” David Mamet’s “American Buffalo,” Paula Vogel’s “How I Learned to Drive,” Thornton Wilder’s “The Skin of Our Teeth,” and “Macbeth.” Six of those productions – all but “Lackawanna Blue” – open after “Trouble” closes, which means those show may have an edge with Tony nominating committee. Even so, with these strong notices, its incredibly topical subject matter, and its own compelling journey to Broadway, this production will probably remain top of “mind” come the spring.